C_Run
I might have to search farther than Bi-Mart for gear some day.

hobster said:
This is exactly what I do. More work putting the split ring on but I’d like to think it gives the spoon more freedom to move than a snap swivel thus giving the spoon more action. I also use Mustad ultra point siwash which are pre bent already. I got turned onto these a couple of years ago, was told they are the best for spoons and I have to agree. Dig the bend in the hook and they’re sticky!

Those are awesome hooks.

Here's the snap I use, a little smaller diameter than a split ring but doable. 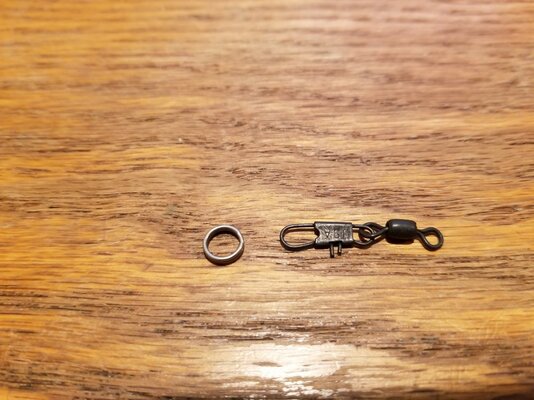 F
Fred
Went to the Wilson river Saturday and the water looked perfect. I spent a lot of my time higher up on the Wilson and eventually worked my way down to Mills bridge. I fished for about two hours there and saw 5 steelhead landed all of them were hatchery fish. Of course I got skunked lol, but it was nice to see fish caught.

Fred said:
Went to the Wilson river Saturday and the water looked perfect. I spent a lot of my time higher up on the Wilson and eventually worked my way down to Mills bridge. I fished for about two hours there and saw 5 steelhead landed all of them were hatchery fish. Of course I got skunked lol, but it was nice to see fish caught.
Click to expand...

We floated it Sunday and didn't have a bite or see one caught. A few boats that said they had fish had multiple fish hooked, otherwise nothing.
P
pinstriper

Hooked Up said:
We floated it Sunday and didn't have a bite or see one caught. A few boats that said they had fish had multiple fish hooked, otherwise nothing.
Click to expand...

Liars who never showed us the fish they said was "in the box".

and how do you feel?)
F
Fred
I woke up earlier than usual and was on the river by sunrise. The first place we stopped my dad hooked into a big one and it snapped the leader line. Then while my dad was going through the stages of grief, I cast into where he hooked his fish and caught one lol. He must have hooked a big buck and I probably caught its wife XD. Over the span of 12 fishing trips, I caught 2 cutthroats and one steelhead. I also lost one steelhead and a rainbow trout . Felt so good to finally land one and it was a keeper with eggs.
F
Fred
It's my fifth steelhead ever, but it's my first winter steelhead ever.

atjohnson1111
Congrats Fred!
F
Fred
Went fishing this Friday didn’t get any steelhead bites, but I didn’t get skunked. Caught two tiny steelhead, one was from a hatchery apparently. Also, can some explain to me why a rainbow trout has to be 20 inches to be considered a steelhead?Do rivers that flow into The Tillamook bay have rainbow trout that stay in the rivers their whole life? I caught a 13 inch rainbow in the Miami, I don’t know if it was just a baby steelhead that stayed a bit longer or a resident fish.
I got two new poles and two new reels. I got free line on both of them, and they were both below $60. The x11 was $59. Sale at fishermen’s warehouse was nice. I got aero jigs for 1.89, and some other stuff. I usually go to Coastal it has some good prices for fishing gear, and its close to where I live.
Any advice on how to fish eggs and ghost shrimp for steelhead. I tried out some spawn sacs I made from my steelhead and I still have tons of big chunks of eggs. Any kind of setup for like drift fishing them would be helpful since I only know about float fishing. Also I’m trying to figure out the right way to fish the brn soft beads, proper weight, float or no float. Didn’t find very much on YouTube.
Some pics from the sportsman show pike minnow program booth.
Last edited: Feb 15, 2020
F
Fred
Oh and I fished the clackamas for two hours today at high rocks park. That’s some really deep water probably fishing at the wrong place. I think there isn’t very many winter steelhead going in right now probably old summers and early winter runs at eagle creek. I’ve never been to eagle creek I might go check it out tomorrow. I’ve only fished this river three times, unless I count the several trips for stocked trout on those lakes. It’s close to my school I’m going have to check it out after class during the week less people .

The only question I can point you in the right direction for is the 20 inch and above Steelhead. I suggest you look up any podcasts that have the name John McMillan. He’s a biologist who basically has made Steelhead his life’s work. His dad was also a fish biologist too. Anyway, John has said that Steelhead have an insane amount of life histories so technically most rainbow trout you see in our coastal rivers are probably Steelhead. Essentially Steelhead are bet hedgers, meaning some of their babies are going to go to the ocean and some of them stay around in the river for most of their life, basically totally random. He uses an example to show how this works by using that old movie Twins starring Danny Devito and Arnold Schwarzenegger. Even though they both came from the eggs of a Steelhead they could not be anymore different. And then he goes on to explain it from there. I highly suggest you listen to that because it is extremely helpful in answering your question. I believe he just started his own podcast too through Barbless fishing so you’ll be able to dive right in!
F
Fred
Had an awesome day today. Unfortunately I didn’t land the fish on any of my new poles ?. My trusty ugly stick has landed all three of my steelhead.
You must log in or register to reply here.