G
Growbug
We got up there on Friday around midday. Everyone was out on the water when we arrived so we grabbed a site, unpacked and got ready to get on the water.
Friday was a little overcast and cool but the bite was on and I was getting a lot of snatches on the Olive Bugger (sz 8).
10 mins on the water and I kicked off my right flipper. Sank like a STONE. I swore a little and for no reason swapped to dragging a spinner and a paddled away. Another 10 mins found me screaming like a banshee as my line was getting pulled out and the fight was on. I had heard on these 15-20" fish and for 3 mins i was hooting and hollerin (LilSalmon said she heard me halfway across the lake) as this 'fish' darted left and right as i tried to get it in.
SO...... got it to the toon. NOT a fish... but NOT a boot either. 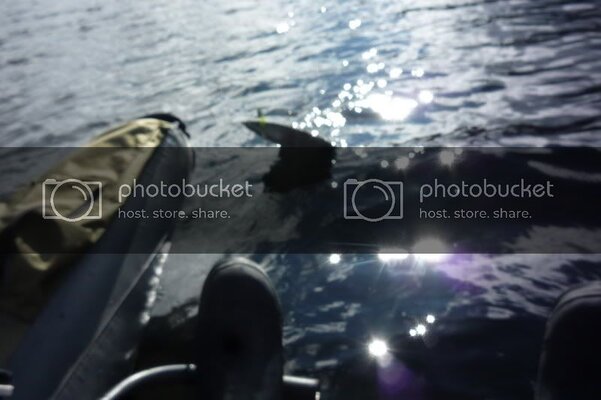 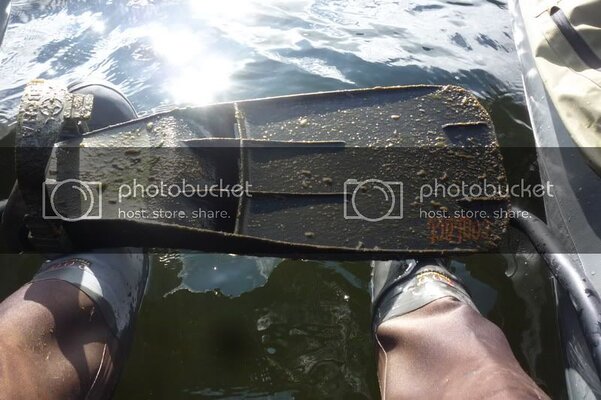 Changed back to Olive bugger on the 5wt after this, nothing landed until 5pm although LOTS of hookups and lost, I am blaming this on crimping my barb down and not being able to keep tight line.
Anyhoo, 5pm and the hatches started. Landed a few little uns which went back in. 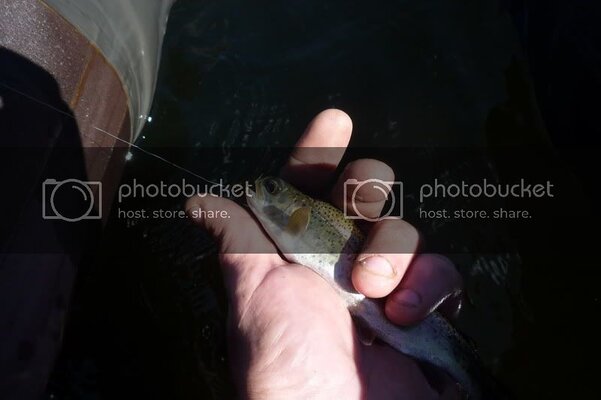 Saturday and its BEAUTIFUL. I dragged myself onto the water at 11 and fished a mix of buggers (green or olive) for the next while. Brought a 10" in on an olive and then handed my fly rod over to my friend, who then brought in a 9" on the same. 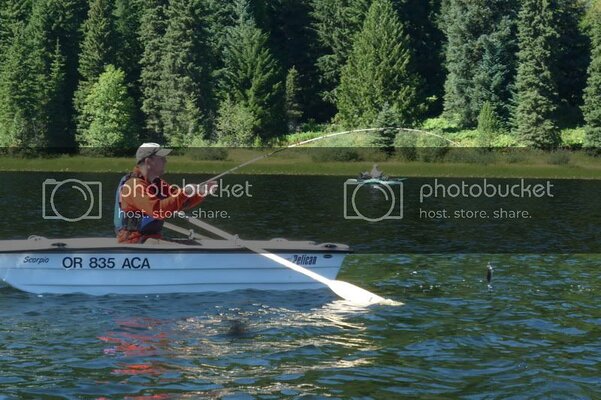 The best fisher of the day wasn't one of our crew.
This Osprey took at least 6 fish that I saw. 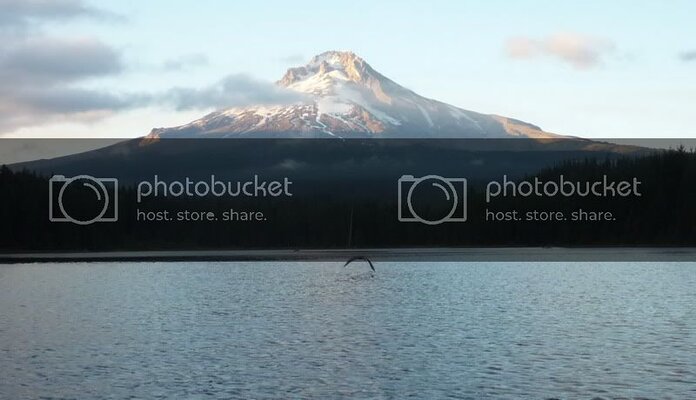 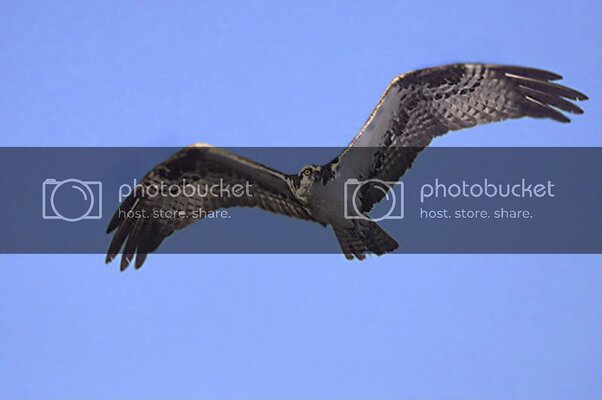 Again lots of bites but then it went DEAD for about 2 hours.
A hatch rolled across the lake in the afternoon and BigSteel hammered them all on dry flys. LilSalmon and the others had a few hookups too. Me? I'm a paddling against that wind as fast as i can in my fat toon!! 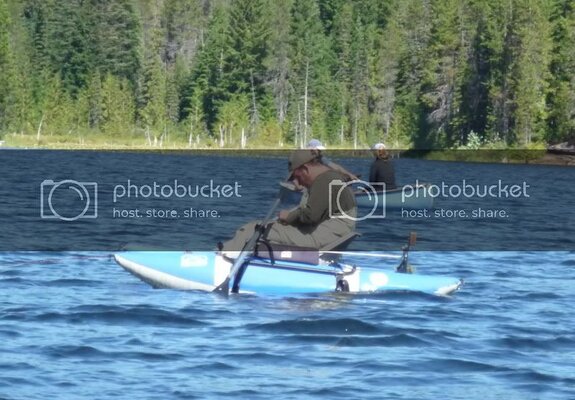 My friends son managed to pull in a 7" on a spinner, then lost it as he unhooked it and dropped it back into the water.
Saturday night was COLD and LOUD (with a respectful request to STFU from the party camping next to us.) it was also LATE as a few of us valiantly stove to finishing all the beer we had. Congrats to OTF and Eggs for helping me until 4am!!
Sunday was a little slow for me, and in then end i set up some powerbait rigs, and myself and my 2 buddies went back out. Now I believe all the OFF guys and gals had left with Bigsteel and LilSalmon being the last.
When i got out to the middle of the lake i thought nah... and returned to pulling one of OTF's Crystal Buggers (Olive) and swore that we would give it another hour.
15 mins later.. WHAM!!! and all over the place. Leap splash, leap splash...
got him in though. 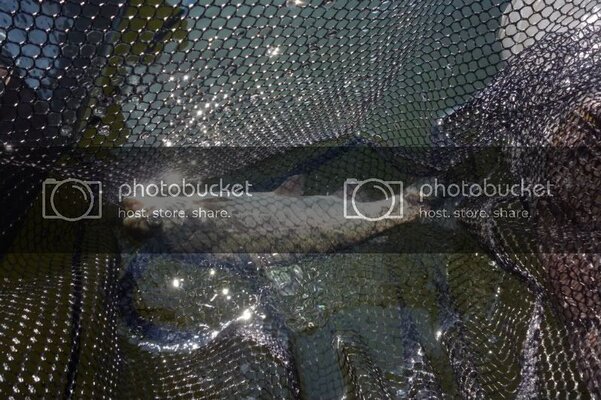 Oh.. and on a final note... there were others that said they pulled in fish that they thought were NOT the Rainbows... 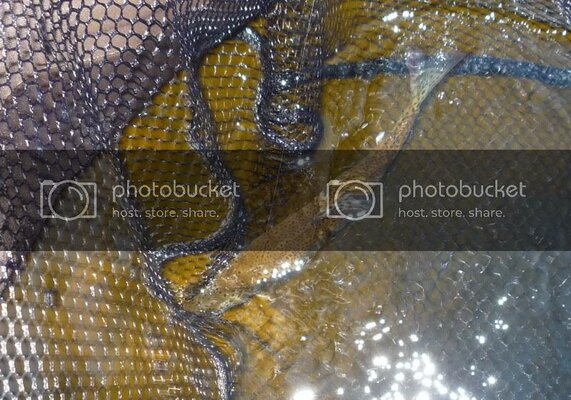 troutdude
I wish that I could've retrieved my fins from Olalla Reservoir, in similar fashion. Way to go!
C
Cohosanders
Great pictures. I love the one of Mt. Hood and the bird. Good looking fishes too. I will have to come next year.
E
eggs
Rob your funner then hell to hang out with! The more brew the better the conversations got!


Thanks for making it up for the weekend!
O
OnTheFly
Good Times!

I spent Wednesday night in the trailer out of the rain tying up flies. I was the first at Trillium Lake campground and getting pumped about the next few days of fishing. I got a report from Ray, the camp host, that people had been bringing in the larger fish. Mid morning Thursday, Bigsteel and lilsalmon arrived. The weather did not make the lake look like a great time to fish on it so we spent our day by the fire at camp. I had to drive back into town Friday morning to take care of some business but as I was leaving, Autofisher and Fluffyfisherman pulled in. Getting back to Trillium and finally on the water, I met up with Bigsteel. As I approached, I picked up my first fish and said to Dave, "So what's the problem", as I land about a 10 inch trout. Bigsteel looks back at me holding up about a 16 inch trophy and says "No problem Here!" He was already into them. Later I met up with Auto, Fluffy, lilsalmon, growbug, eggs and Irishrover. We all made a day out of it fishing while watching Mount Hood start to peek through the clouds. Ninja and wife Kim joined us later for Friday night campfire. Friday and Saturdays campfires were as much fun as being on the lake fishing. What a crowd! You guys crack me up. My jaw still hurts from laughing. Thanks to all of you who came and kept me company.

Bigsteel: Dave, for a river guy you did alright out there. :lol: When's our next trip?

lilsalmon: When I accidently drifted over your line and your caddis fly got snagged under the seat of my float tube, I think we were both glad it wasn't hung up where we originally thought it was.:shock::lol:

eggs: One of the highlights of the trip was you catching that trophy fish with the Frankenstien fly we tied (half olive crystal bugger half carey special) mostly under the influence of Bud Light...which we proudly named the fly.:lol:

Ninja Jimmy, I'll never get tierd of your fishing stories....do you know the one I'm referring to?

Autofisher and fluffyfisherman It was a nice surprise to see you guys up there. Mike, I think you've been holding back on us because you really do know how to fly cast. And Sergio, I'm glad you were able to adjust the foot rests on the pontoon. A guy your size simply cannot use anything set up for someone who is 5ft tall, such as my wife Carrie. That looked painfull.:shock::lol:

Irishrover: It's always a pleasure having you in camp. That Monster single piece of cordwood that you brought was still burning in the fire pit the next morning! Also, thanks again for the boat ride that lead me into two more large fish that day.

Growbug You have got to be the most expert over-a -campfire Jiffy Popcorn maker ever! The innovative way you attached the wire handle to a long and sturdy hotdog skewer was brilliant.:clap: Nice to meet you and your friends todd and his son Mack. By the way, that unclipped fin you caught was awesome!
Last edited by a moderator: Mar 1, 2018
You must log in or register to reply here.