G
Growbug
Got a nice upgrade? Want to share how to mount things on the toon?

troutdude
Does anyone use a trolling motor on their float tube? (I'm serious here folks). I have seen some tubes, that allow for a zippered compartment, so you have a motor.
G
GraphiteZen

troutdude said:
Does anyone use a trolling motor on their float tube? (I'm serious here folks). I have seen some tubes, that allow for a zippered compartment, so you have a motor.
Click to expand...

Is that even LEGAL?!?!
G
Growbug

troutdude said:
Does anyone use a trolling motor on their float tube? (I'm serious here folks). I have seen some tubes, that allow for a zippered compartment, so you have a motor.
Click to expand...


I think that they are called flippers, and you actually SIT in that zippered compartment..

Seriously.. no.. i have never seen that. Would like to though.
T
Throbbit _Shane
i need some flippers that fit my waders
G
Growbug
Hey Zen... is that a fish well????? need photos of that and the rod holder / mount
T
TTFishon

Throbbit _Shane said:
i need some flippers that fit my waders
Click to expand...


I'm pretty sure I have some flippers you can have. I'll have to double check to make sure but I'm pretty sure they're still in my garage. I haven't used them in about 12 years or so.
T
TTFishon
I don't have any pics but last year I cut the cup holder out of a broken folding camp chair and zip tied it to my toon so now I can enjoy a cold beverage out on the water. lol
T
Throbbit _Shane

TTFishon said:
I'm pretty sure I have some flippers you can have. I'll have to double check to make sure but I'm pretty sure they're still in my garage. I haven't used them in about 12 years or so.
Click to expand...


haha sweet. im sure we'll see each other on the water this year!
T
TTFishon

Throbbit _Shane said:
haha sweet. im sure we'll see each other on the water this year!
Click to expand...


I'm pretty sure they're sittin on top of my fridge. I'll check tonight before I head to work.
G
GraphiteZen
Fish box:

It is one of those long Tupperware containers for storing bedding. It was over 3' long I believe (you can see it extending under seat in the yellow circle..
First I drilled some holes on the bottom of the box to attach the skirting and used grommets and caulking to make the box water tight again. I drilled enough holes so that the bond between the skirting and the box was near water tight. A little water would get in (maybe an inch) which I found beneficial for keeping my Smelly-Jelly from turning to liquid in the summer. The skirting joined long the bottom and up both side, extended out from under the box and attached to the foot rests using some small inserts I made for the actual rest and the PVC bar you can see is zip-tied to the skirt itself. The skirting is old pontoon material from a toon I blew up at Olalla....
I insulated the box by getting some flat foam insulation sheeting, cutting it size to make a total of five pieces: One large piece for the bottom, and one each for the sides. I used insulation gluing to affix it to the sides of the bin, and then filled in all the gaps with spray foam.
At that point, I used more insulation gluing to cover the interior with space blanket material, making sure to cover the entire surface to be glued in order to support the blanket material as it's very thin.
I then cut part of the lid off and used zip-ties to make a door.
With the lid on I went through and drilled holes through the lid and along the outside lip of the bin and used more zip ties to attach it to the frame (blue circle).
The issue now was running into boulders and breaking the box. So to protect against that I got some metal and bent it into shape to attach to both sides of the frame and extend under the box (red and green circles).

The rod holder is your basic Scotty's holder with the receiver mounted under the metal plate with the female end sitting just below a large hole I bored out of the metal. The metal is covered with skate-board grip tape.

I also used some 1'' aluminum squaring to raise the seat a total of two inches which was GREAT! And yes, my seat is Da Bomb.
Last edited: Feb 2, 2011
N
NoobTooner
....THE TEN DOLLAR STEALTH PACKAGE.... 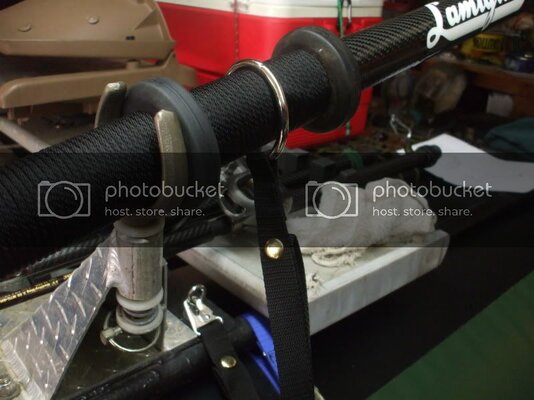 sliding that ring down below the oarwrap was just so LOUD. so i went to Andy&Bax and picked up a second set of stops for 10bux, slid the ring down OVER the oar wrap and the new stop after that. now it's nice and quiet. them steelies will never hear me coming...

unless someone thows some cantalope in the cooler:lol:
N
NoobTooner
any one have a link for replacement dry bags like the ones in the picture above (graphite).
mine didn't come with any and i'd love to get my hands on a pair.
G
GraphiteZen

NoobTooner said:
any one have a link for replacement dry bags like the ones in the picture above (graphite).
mine didn't come with any and i'd love to get my hands on a pair.
Click to expand...

Those aren't really dry-bags. They leak water through the zipper badly, but they do hold a lot of gear. I got them at Sportsman's Warehouse for $30 each I think.
N
NoobTooner
oh.. i always thought they were waterproof. that's too bad. they do look good though. guess i'll have to go with the old waterproof tube bags then. their just such a drag to get into and all the duffles i've see are rediculously expensive.


speaking of expensive.. those adjustable seat bases.. anyone got a good rescourse for them?
can't seem to find any under 50bux.
Last edited: Feb 2, 2011
N
ninja2010
i don't hv this toon anymore, but it was a sweet ride when i did... i just went with a boat with no frames that would handle a gas motor instead.

i love having the raised swivel seat so i can spin around and either work the motor on the back or in the front (i flipped my trolling motor controls around to mount to the footrest attachment, so the toon is a fwd)

this toon had wheels that was strapped on so it's a snap to launch, and the inflated tires added more floatation for the back of the toon where i carry my gear and anchor. 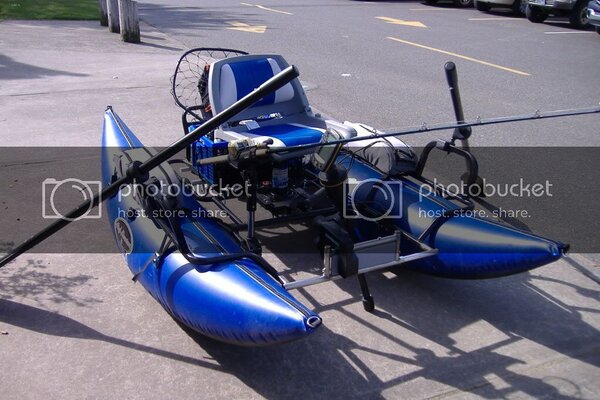 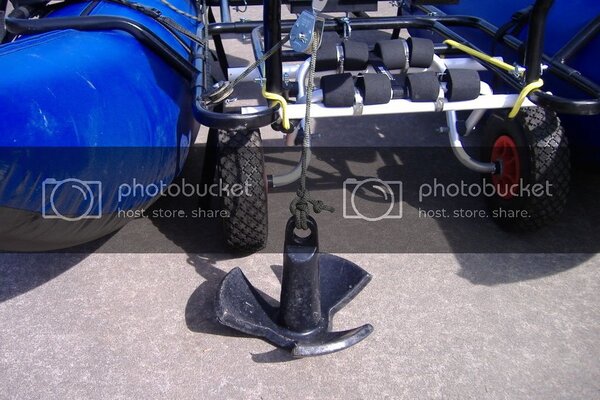 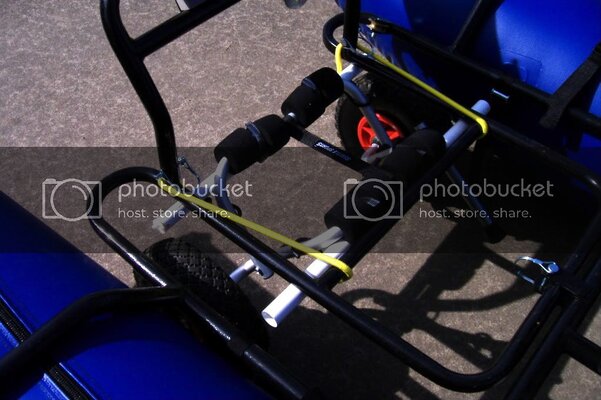 oh, and here's an earlier kickboat i had when i was in sandy eggo - no oars for this one but it's got huge 4 compartment bladders.
M
Markcanby
This is what Im putting on my toon this year.
N
NoobTooner

Markcanby said:
This is what Im putting on my toon this year.
Click to expand...

woah. that's pretty nice looking. ...who makes it?
where can i find it?
M
Markcanby
Its a ATV bag my boss has on his Quad. I was looking at it an Im pretty sure it will fit right on my Toon. He said he got it at the Honda shop. I think Taylor in Woodburn.
You must log in or register to reply here.