Usually I like to give a good detailed report. One that gives a few laughs, a few chuckles, and good all-around story. And because I do it, my reports tend to be a little long. My wife would say that I am long winded and talk too much. Too much detail she says. But I say that it makes a good story.

But in this case, I think there is too much detail to give it all. I might have to write a book some day. hahahaha :lol:

Saturday, 06/11/2011, my brother and I took off to meet Brandon and go do some fishing (what else is there to do on a beautiful saturday morning!! )

We got to the spot and started fishing. Brandon and I were fishing flies/nymphs and my brother was fishing spinners.

The stream was beautiful. I think that within the first 20 or 30 mins, Brandon had a fish on, nice little cuttie. Took a picture and he was gone. Brandon was fishing nymphs the whole time if I remember. After about another hour or so, we headed up stream a ways and caught some nice fish in a deep little riffe and pool. Brandon got one first and so up to then we were 2 - 0 - 0. He was totally killing us (my brother and I)!!

Up until then I was fishing dries, and some times a dry with a dropper. But I wasn't doing too well. So I decided to switch to a double nymph setup. Brandon showed me how to set it up with a little strike indicator. So I fished the same spot where he had gotten his second fish. BAM!!! FISH ON!!! SWEET!!! I got a nice little rainbow, probably around 4 inches or so.. I was stoked!!! So I shot up stream a few hundred yards.

I found this nice little riffle, bend, pool, undercut and started to cast there. After my third cast, BAM!!! Fish on!! But this one was freaking awesome!!! He started jumping all over the place. Diving deep, then bursting out of the water. Brandon came running over to help me with the fish and as he was getting close, the fish jumped out of the water straight on the bank!! :lol:

We removed the hook and started to revive him when bam, he was gone. He slipped out of Brandon's hands quick as lightning. It was a nice little wild rainbow around 7 inches. Brandon felt pretty bad about accidently letting my fish go before we could get a picture. But it was ok, didn't bother me at all. It was nice to actually catch a fish.

We fished that area for a little bit longer and then decided to head down to the car to head up to the foot hills around the area.

Then the saddest thing in my short fly fishing career happened. As we got back to the car, I placed my rod up against the car. I went to open the trunk to get somethings out and as I opened the trunk, it pressed my rod against the car's antennae and SNAP!!!

Brandon said in a very calm voice, "Oh man, you broke your rod." I didn't believe him for one second because of how he said it. If I was going to tell someone that their rod broke, I would have been freaking out!! The dude just broke his rod. But Brandon said it in such a calm, nonchalant way that made it non-believable for the first few moments. (Nothing against you Brandon, it wasn't your fault at all. ) But I thought: What does he mean I broke my rod? I don't break my rods. I love my rods. I take care of my rods. How could I break my rod? Then I looked at my rod...... OH CRAP I BROKE MY ROD!!!!!:shock:

I wanted to cry, yell, scream. It felt like a bad dream and I was waiting to wake up from it and still have my rod in hand ready to fish. But the cold hard truth was that I did in fact break my rod.

Good thing it has a life-time no-questions-asked warranty. Plus they are based out of Vancouver so a short drive up to the HQ and they will fix it for me or just give me a new rod!!

So after I got over the initial shock, we hopped in to the car and drove up to the foot hills. We did pretty good there.

Got lots of strikes, and lots of fish. Brandon has defiantly earned his name of the Cut-throat slayer. He can slay them with the best of them!!!

I would tell some of the stories of how he got them and what happened but I will let him tell them as he was the star of those moments.

All in all, we had a great time. I landed three, two on my rod and Brandon was awesome enough to share his rod with me, so I got one on his.

He got like 6 or 7 maybe even 8 trout landed. We both had a number of strikes and hits but no landing them. My brother had two hits on the spinner and one on the fly rod but wasn't able to land any. It was is first time fly fishing and he hadn't ever done a lot of spinnner fishing. He said he really enjoyed it and wants to do it again!!! YESS!!!!!:dance:

All in all, it was a great trip. Awesome area, good company and wonderful fish. The three best F's - Family, Friends, and Fish. What more could one ask for on a fishing trip?

Below are some pics of our trip. Brandon has some more pics that he will upload shortly. Unfortunately, my camera fell into the water so I wasn't able to take as many pics as I wanted to. 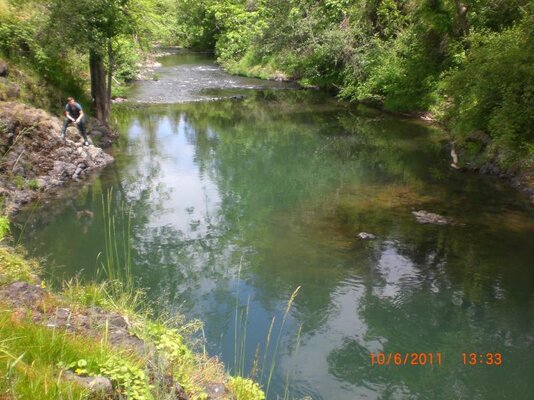 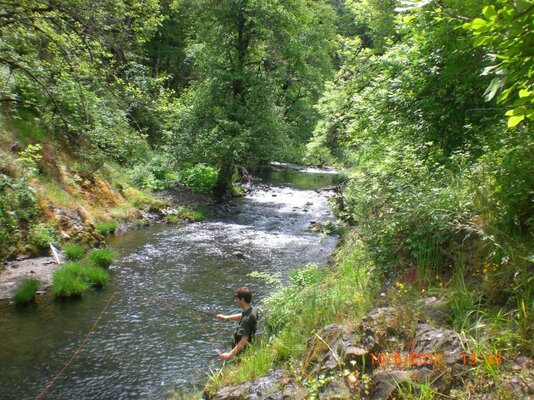 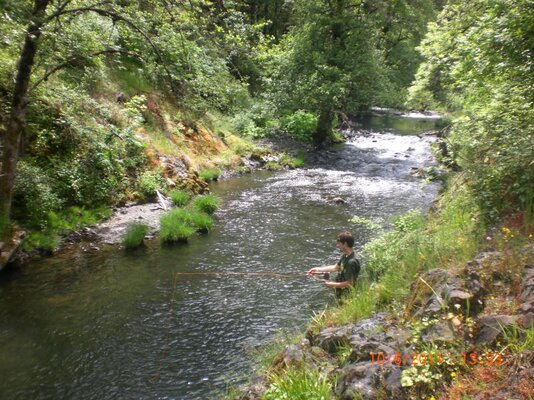 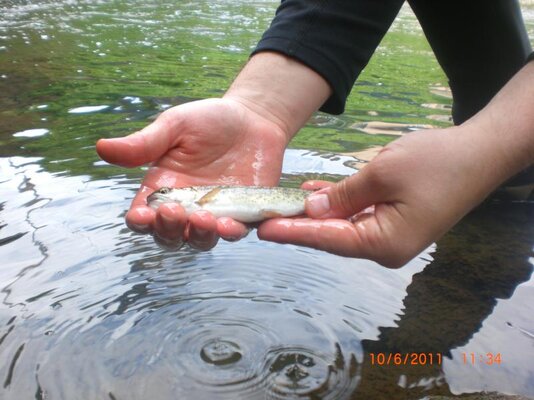 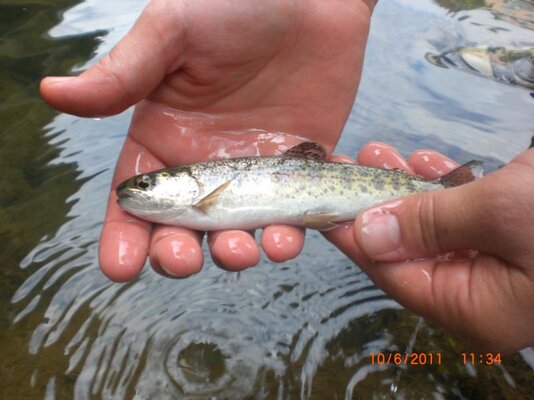 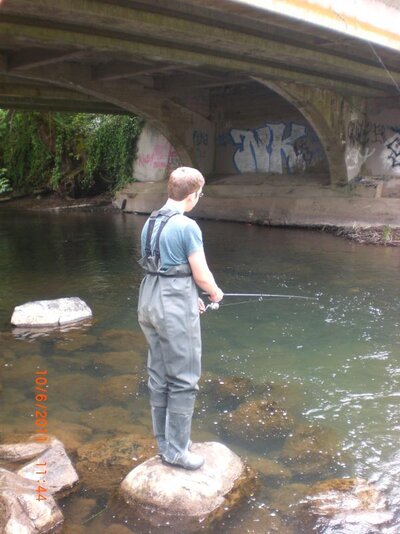 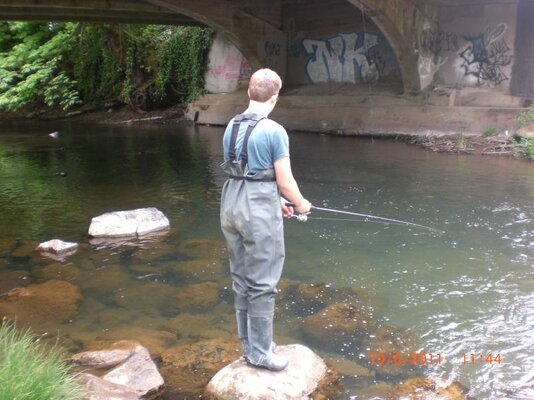 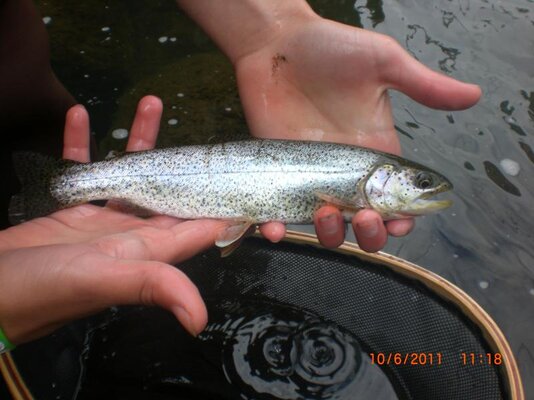 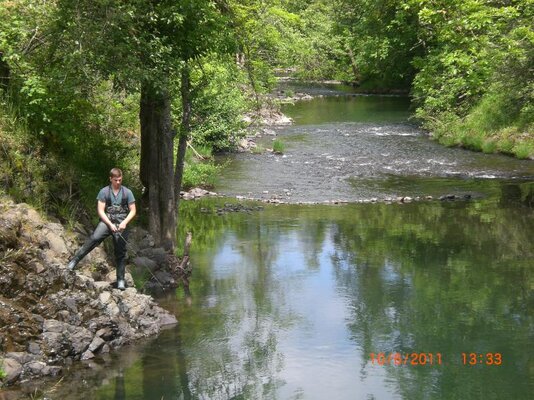 I will have to do a second post for the remaining 3 pics that I have.

P.S. My brother is the one in the green rubber waders with the spinner pole.
Last edited: Jun 13, 2011
S
Spydeyrch
Here are the remaining 3 pics from my camera. 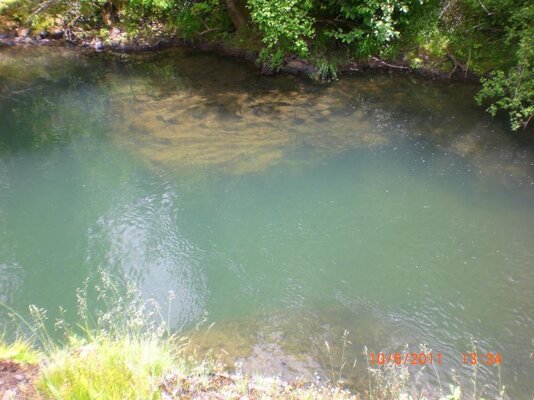 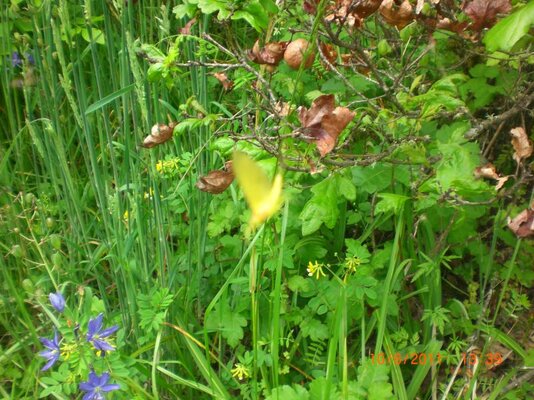 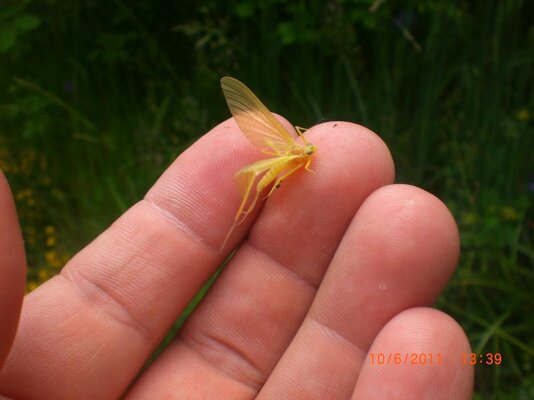 brandon4455
heres the 2 fish of mine we got with my phone camera inluding the biggest of the day! thanks for coming out bro. it was fun fishing with you guys
Last edited: Jun 13, 2011
S
Spydeyrch
Nice pics Brandon. It is always a blast to go fishing with youman. We got to get you up here sometime to hit the Wilson, or Rock Creek, and the other small streams and bigger rivers.

-Spydey
L
lilsalmon
sounds like an excellent day.....we were supposed to be there but I hit the parade in Portland instead.....
S
Spydeyrch
Yeah, Brandon told me that you and bigsteel were going to maybe go, but that you had other tings to do. Too bad. I was hoping to meet you and bigsteel (and leech your fishing secrets ..... I mean....... :shock: Just kidding. ) :lol:

Hope to fish with you all soon.

brandon4455
forgot to add stories, i was in a hurry to go look at a boat with my grandpa. the biggest fish of the day pictured in my above post was sitting at a shelf just about 7 ft of waer that dropped into atleast 15 ft. on the way upriver i had seen the fish actually jump out of the water and slurp a golden stone off of a overhanging plant :shock: it was amazing. so we ventured upstream caught 1 fish and came back down, and spydey said he spotted a nice fish (approx 10 inches) my line was in the water dragging because i didn't reel in and i noticed i had a bit at the shelf! i set the hook and missed it. casted again and FISH ON!!! it was that good fish too! he took some line as i palmed the spool tp keep him from escaping. wating for him to get tired spydey netted the fish and i yelled in excitement. the fish, like almost all fish that day was hooked right in middle of his upper lip by my big heavy possie bugger i got from bigsteel. 3 of my fish from that day were hooked in the exact same place perfectly which was pretty cool.
F
FlyBum
Great Post looks like it was pretty nice over on the other side of the hill!

brandon4455
im going again tomorrow but hitting down ower to some spots down low i haven't been to for a while. got a new small backpack to hold lunch and tp lol willhave a report tomorrow night. let me know when you guys want to come down again so we can plan somthing. i plan on hiking in atleast 3 miles up that gravel road this time so we need a very early start
Last edited: Jun 13, 2011
N
nwkiller
nice pics guys awesome thread
S
Spydeyrch

brandon4455 said:
im going again tomorrow but hitting down ower to some spots down low i haven't been to for a while. got a new small backpack to hold lunch and tp lol willhave a report tomorrow night. let me know when you guys want to come down again so we can plan somthing. i plan on hiking in atleast 3 miles up that gravel road this time so we need a very early start
Click to expand...

Yeah, I will let you know when I am ready to go down again. I am kind of booked for this month so probably next month is going to be the best time. Hiking up sounds like a good idea and lots of fun!!!

We got to get you up here soon to hit som of the rivers ans streams up here.

Looking forward to that report from you hitting the lower spots.

Yeah, I will let you know when I am ready to go down again. I am kind of booked for this month so probably next month is going to be the best time. Hiking up sounds like a good idea and lots of fun!!!

We got to get you up here soon to hit som of the rivers ans streams up here.
Looking forward to that report from you hitting the lower spots.


ill be up there for the wilson river cleanup next month. july 9th i believe. You should come help out! maybe fish a little too
im off to the water in about half an hour or so. wish me luck!
S
Spydeyrch

brandon4455 said:
ill be up there for the wilson river cleanup next month. july 9th i believe. You should come help out! maybe fish a little too
im off to the water in about half an hour or so. wish me luck!
Click to expand...


Dude sweet!!! I will have to make it out there for the cleanup and do some fishing!!

Good luck on fishign this morning! Take lots of pictures.

-Spydey
You must log in or register to reply here.