The agony of defeat

bass
Fishing out of Newberg today (January 26) just below Ash Island. I hooked by far the biggest sturgeon I have ever seen. It was the daintiest of nibbles and when I tightened up it felt like a log. For a few seconds I thought I might have been snagged, but then the snag started swimming. 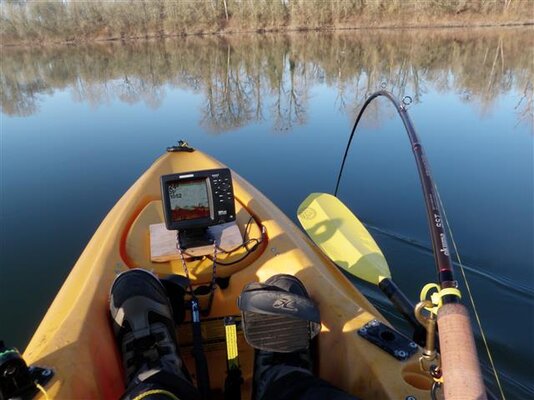 That fish pulled me from near Ash Island, most of the way to the ramp zig-zagging across the river and then she took me back up past where I hooked up and part way up the side channel. (Here is a couple of seconds of video I took with the Olympus tough.)

Then deciding that was not to her liking we pretty much reversed our course and headed back towards the ramp. For extended periods of time she pulled me as fast as 2.4mph upstream and 4.3mph downstream according to my GPS. The power of that fish was just unreal. My arms started quivering at around the 40 minute mark. I figured it would be over soon since that is about the longest battle I have had with a sturgeon - and that was an 8 footer in June. I figured with the cold water that the fish could not have that much fight - at least thats what I kept telling myself.

Man was I wrong.I stayed on top of it and tried to lift. Again and again I could get it 10 feet off the bottom and then it would dive back down. Here is a photo of one of those events. 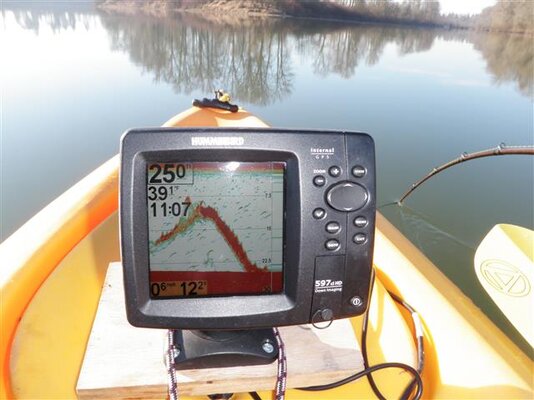 At the one hour and 20 minute mark it swam into shallower water (about 15 feet deep). I thought that this is my chance and I clamped my thumb on the spool and pulled with everything I had. I even used my leg to leverage the rod up. All of a sudden, up she came. I was able to get her to the surface. She came up right beside the kayak and she looked like it was as long as my outback. Her head looked like it was 2 feet across. The fish was so big it was scary being so close to it.

Yep, she came up, and then just exploded and completely doused me with a few gallons of water and took off on a blistering run. It was like she had just realized for the first time she was in a fight. For the next 15 minutes if felt like she was fighting harder than even earlier. I was just hanging on - there was nothing I could do to that fish.

She took me to a spot that was about 30 feet deep (about the deepest water in the area) and then I think she tangled me in a tree. I could lift it up a bit, but then it would just go back down. I went over the spot and could see log on my DI that was sort of angled off the bottom. I think she went underneath it or something. I tried to get her free but finally I wrapped my line around my pliers and pedaled off as hard as I could and snapped the line. I threw up a little in my mouth when the line finally snapped. I should have tried harder to free the fish, but to be honest I was done.

My arms were spasming as I reeled in the empty line. I pedaled back up to Ash Island, pulled into shore and just lay in the dead grass for about 1/2 an hour. My arms and back are really sore today.

I did go back and fish some more and had a couple of more bites, but I just let them bite until they stopped. I told myself I was just waiting for them to take it better but I think deep down I was afraid to hook up again. By the afternoon I was recovered enough to pull up the anchor (thank goodness I was only in 27'). I actually did re-anchor in another spot but did not get bit. After a short stay I pulled the anchor and just pedaled around for a while enjoying the day.

So, in the end I suffered the agony of defeat but I guess I would have to say that was my most exciting skunk ever.
G
Gettin' Jiggy Wid It
An epic battle! Thanks for another great sturgeon post. So there are some massive fish above the Falls after all. The photo of the fish moving on the FF was awesome. The water was like glass...must have been a fun ride.
E
eugene1
That's an awesome story, at least you got to see the beast! Reading it, seemed like I was there too.

rogerdodger
wow.
B
bagold53
nice. I have heared stories of sturgeon that big in the San Francisco Delta area.
B
billfisher
Great battle and post. Sorry you didn't land it, but at least you got to see it. Probley a once in a lifetime hookup. Thanks for sharing!

jamisonace
Great report Bass. I enjoyed reading that. I wouldn't be concerned about that defeat too much. It would be like wrestling someone 3 or 4 times your weight on their home court.

That was an amazing story. I'm surprised you were able to fight it that long. I'm sure I would have lost the battle at about the 1 hour mark due to fatigue.
T
TimberTodd
Thank goodness you weren't relying on just a paddle to get you home. Thanks for sharing the battle with us.

bass
Thanks guys. I was partly bummed and partly relieved when I realized the battle was over. I am not sure I would have been brave enough to grab onto it from the kayak. It seemed surreal when I finally laid my eyes on it. I new it was huge but I just was not prepared for how huge.

Hey TT, this is definitely points out a great reason to have a Hobie!

Raincatcher
What a battle! :yikes: You're probably lucky you didn't get it up onto the kayak. It sounds like she was big enough to eat the kayak! Thanks for sharing your beast of a skunk tale. :thumb:

Raincatcher said:
What a battle! :yikes: You're probably lucky you didn't get it up onto the kayak. It sounds like she was big enough to eat the kayak! Thanks for sharing your beast of a skunk tale. :thumb:
Click to expand...

Definitely my proudest skunk ever
R
rowlison
Thanks for the post Bass! I moved to Wilsonville back in Aug and have been fishing the Willamette and its great to see post like this. Just means there are monsters to catch!
M
mikeee2362
Wow!!! I hate to catch and release on THEIR terms...but what an awesome battle!!
You must log in or register to reply here.