Superbowl Sunday was a great day to be out fishing

bass
Not being a huge football fan I decided to go ahead and go fishing on
Sunday. Man, what a gorgeous day it was. It started out great since I
got to chat a bit with a friend I had not seen in quite a while.
It was nice catching up. Put me in a greatmood to start the day.

I was on the water and fishing by 8am. I tried a few spots where I
marked fish but my plan was to be impatient. At each spot I made one
cast and let it sit for 5 minutes. When I did not get a bite I pulled
stakes and moved on. I moved about 4 or 5 times when around 9am I
found myself in a small nook. It was a cool spot because I was more or
less hidden from view but I was marking a ton of fish.

I was pretty excited when I hooked and landed a big keeper sized fish
on my first cast. I really like the artistic nature of this photo 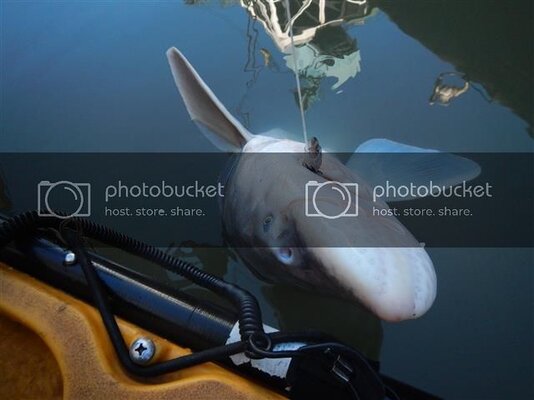 For the next two hours the action was incredible. I caught 16 fish in
two hours including two small oversized, 4 keepers and 10 shakers
(good sized shakers, not tiny ones). Around 11am I got a call on my
radio from my friend Brian. We had planned to meet up late in the
morning. I left my spot and headed back near the ramp and told Brian I
was on a hot bite.

I told him the spot was small and hidden and now that there were quite
a few boats around I did not want to head back to the spot. There was
barely room for one person to fish, although I would have no qualms
fishing it with Brian. We agreed to wait to go back to the spot and
instead go out into the main river and fish an area where he had done
well the day before.

We pedaled upstream to the area where he had fished the day before and
we were psyched to be marking fish. I have never marked fish out in
current and not caught the heck out of them before! Brian shares that
same opinion. Sturgeon in the current are biters!

We anchored up and cast out. I had gotten completely soaked with sweat
on the pedal up to the spot since I still had several under layers on
from early in the morning. I decided to peel everything off and put my
dry top back on. While I was in the process of doing this I got a good
bite that I ignored since I knew we would be slaying them in that
spot. By the time I got all the warm layers off and my dry top back on
the biter was gone.

I reeled in and changed a chewed up bait and cast back out. About then
Brian caught a shaker and we were thinking it was ready to turn on -
Brian and I were both kind of on edge anticipating a good bite. Well
it turns out that there is a first time for everything. It turns out
that you can mark fish in the current and not have them bite.

In about two hours of fishing Brian caught one more shaker and I did
not catch any. We each had a couple of bites but they seemed to be
from really small fish. We moved multiple times during that period but
could never find biters. We both kept commenting that we were sure
this next cast or this next spot would be the one. I remarked how that
when I first met up with Brian that I had said the bite was so good in
the morning that if I did not catch another fish all day I would say
it was a good day.

I told him I was regretting making that comment.

So after finally admitting defeat out in the river we decided to head
back into the harbor to fish some more. We pulled up to a spot that
usuallly has a lot of fish around it but the bite there is off and
on. No real rhyme nor reason but it just runs very hot and very cold.

Fortunately it was a hot day. We both started catch fish right
away. Mostly keeper sized fish which are my (and Brian's) favorite
size to catch. Big enough to have a fun tussle with, but not so big as
to just feel like work. Things were going great and a couple of folks
who were new to sturgeon fishing from their kayaks came over near us.

Shortly thereafter Brian hooked a behemoth. I have never seen a
sturgeon run like that ever. The fish went under one of the dry docks
and never stopped. Brian just sat there and watched the fish take all
of his braid (>100 yards) and down into his mono backing. It
eventually hung up on something and broke his line. He lost all of his
braid and we both felt bad about that fish trailing all that line. I
hope that it can rub it off on something.

Well Brian decided he was done and left. He said he might fish back
towards the ramp but he was done fishing the spot we were in. I told
him I was going to fish a while longer but that I might catch up with
him later if he decided to fish in "safer" waters.

I kept catching nice keeper sized fish and gave a few tips to the
folks that were new to kayak sturgeon fishing and they started catching
some fish as well. The bite was just so good it was hard to leave. I
had 24 fish on the day and decided that I would catch one more and
then head back to see if I could find Brian.

I made my last cast and got a bite within about 30 seconds. The bite
was very soft and when I tightened I knew I had a big fish. Apparently
it was a friend of Brian's fish because it ran under the dry
docks. Fortunately for me it did not go nearly as far. This was the
toughest battle I have ever had in my kayak. The fish was big but the
situation made it brutal.

The fish kept me pinned against the dry docks and oil booms. I finally
was fighting the fish by putting my feet up onto the bulkhead and
leaning way back to get an angle where I could apply pressure without
scraping my line on anything. Again and again I would finally gain a
bit of line and then the fish would take back off changing directiosn
just enough to make me lose my balance enough to have to reset my
fighting stance. I was extremely tense fighting that fish. The day was
warm and I started really cooking inside my waders and dry top. They
are good at keeping water out, but they also keep it in.

During the course of the fight was the first time I have ever thought
about cutting my line while fighting a fish. I was totallly soaked
with sweat and frustrated. I could not make any progress on gaining
and keeping line. Every time I would gain a couple of feet the fish
would take it back. I was becoming completely exhausted, from the
exertion and the frustration of not being able to do anything with
that fish. Each time it took back off I though for sure it would hang
me up on something.

The only thing that kept me from cutting my line is that I kept
thinking that it has to be over soon. Each time I was wrong. After
about 40 minutes the fish finally came out from under the dry dock but
continued to keep me pinned against an oil boom. Each time I would
position myself to where I could get good leverage and be able move the fish a
ways it would change directions and I would lose my ability to pull
hard and the fish would take more line.

All told the battle took 56 minutes (longest I have ever fought a
fish) but finally I was able to get that big girl up to the surface. I
was so exhausted I was shaking, just a terrible combination of stress,
tension, overheating and exertion. Against the side of my kayak I estimated the
fish at a bit over 7'. No where near my biggest but definintely the
toughest.

I was holding her mouth with two hands while I tried to let both her
and I recover a bit. I let one go to try and reach for my camera. At
that moment she decided she was done and she drenched me with a flip
of her huge tail as she took off in a big explosion of water. I just
sat there my arms trembling and shaking. I decided that was more than
enough for the day.

The two guys I had helped earlier had watched most of the fight. They
laughed and asked if I was ready for another. I just laughed with them
and told them I was done. I found Brian on the way out and sat and
told him about my adventure, but I did not cast out again.

That was one intense and crazy day of fishing. Probably the two
hottest bites I have ever experienced sandwiching a complete drought
in the middle (which of course was the only time during the day that I
was sure I would catch fish). I think that is why I love fishing, you
just never know what is going to happen.
B
billfisher
Great post! Beats the heck out of watching sports. I was tired just rooting for you. Thanks for taking me along.
B
bubs
Epic!

bass
Glad you all enjoyed the write up! That was a crazy day for sure.

Shaun Solomon
Wow, insane. It usually does not end well when you have to fight a fish longer than a half hour in my experience. Something always seems to fail. Sturgeon from a kayak... not sure I will ever have the stones for that.

Shaun Solomon said:
Wow, insane. It usually does not end well when you have to fight a fish longer than a half hour in my experience. Something always seems to fail. Sturgeon from a kayak... not sure I will ever have the stones for that.

That was a brutal battle.

Catching a sturgeon from a kayak sounds impressive but it is really not that big of a deal. The kayak I have is really stable and you never feel like you are going to dump in a normal fight. That last battle had a few dicey moments when I was being dragged under the dry dock, but that was unusual. In open water the kayak just acts like a secondary drag and makes it easier to whip a sturgeon then from a big boat.
You must log in or register to reply here.