Sturgeon fishing has been outstanding

I made three sturgeon trips in December all out of Swan Island Harbor, but I was really lazy about writing up any reports. On the 14th I caught 22 but only 4 keepers and the rest were shakers. On the 22nd I had my best day with 31 sturgeon and 9 keepers. We also got to watch them move a big Coast Guard boat into the dry dock. Really a remarkable day. 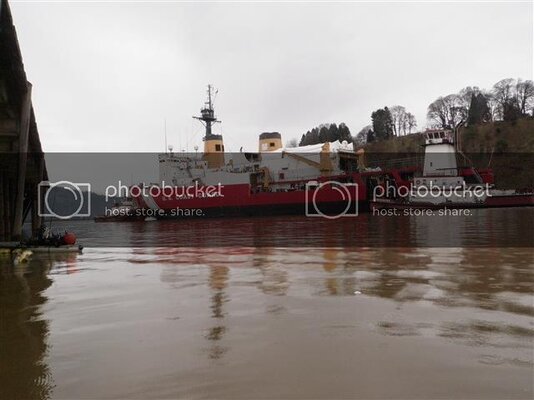 After my success the previous week I thought I had it all figured out and I just knew I was going to break 40 fish. When you start thinking like that it is only proper that the fish remind you that it is not always that easy. I got to Swan Island and it was 37, drizzling and there was a steady "refreshing" breeze. Pretty much stayed that way the entire day. I took my time getting ready while chatting with a trucker who was waiting for his trailer to be loaded. He really like the Hobie pedal drive

The day started out with a nice dose of stupidity on my part. I had not unpacked my gloves from the previous week and I realized in the morning that they were still wet. I put them by the floor vent of the truck on the blasted the heat on the drive there. Since I was gabbing while I was getting ready I did not pay attention to the gloves as I was getting the kayak ready.

After I launched and started pedaling down the harbor I realized that I had forgotten my gloves on the floor of the truck. Doh! It was pretty cold but I did not want to go back so I just put on my rubber over-gloves and decided to suck it up. As I made my way to the mouth of the harbor I stopped to watch them lowering the lifeboats for the Global Sentinel (big ship that winters over each year in the harbor). It was kind of cool. By the time I started fishing it was around 9am. I tried spot after spot all morning, catching a couple of fish here and a couple there. No spot produced great. I finally found one spot out in the current with a good bite, but after catching 4 quick fish including a nice sized keeper a giant raft of trees came down and I had to quickly pull anchor and get out of the way.

I decided that I would try to find a good bite in a safe place but the original pattern of a couple of fish per spot continued to be the order of the day. Around 1pm I took a shore break. My hands and feet felt like they were frozen solid. While I was on the shore I decided to switch to a dry hat. I pulled out my clothes bag from inside the kayak and low and behold I had packed my gloves. Man did I feel stupid suffering all morning when I had the gloves with me the whole time. Super Doh!!

I went back to fishing and kept trying various spots along the edge of the current but never found a solid bite. By 3pm I had been fishing for 6 hours and only had 13 sturgeon (3 keeper sized) to show for it. Quite a ways off from the 50 fish I was planning on.

By then I was shivering almost uncontrollably so I decided to start heading back and fish my way there. As I made my way back I spotted some jumpers near one of the dry dock berths. I quickly made my way over there and my fish finder lit up like a Christmas tree. The fish had been stacked like this the previous week but those fish had not been great biters. However, I decided to give the spot a try since none of my other "great" ideas had panned out.

Well, I guess the fishing gods felt that I had suffered enough because man was the bite on fire. In the next hour and a half I landed 4 shakers, 4 keepers and one borderline oversized. I also had two big oversized break off. I could not budge either of those fish an inch off the bottom as they towed me around until they each caught my line on something and broke off. Such are the dangers of the harbor. I was getting bit about as fast as I could throw in. I will say that I was a lot warmer constantly fighting fish rather than sitting there waiting for a bite! So I ended up with 22 fish again, same as on the 14th, but with more quality fish this time.

Here is a pic the fish that was borderline oversized: 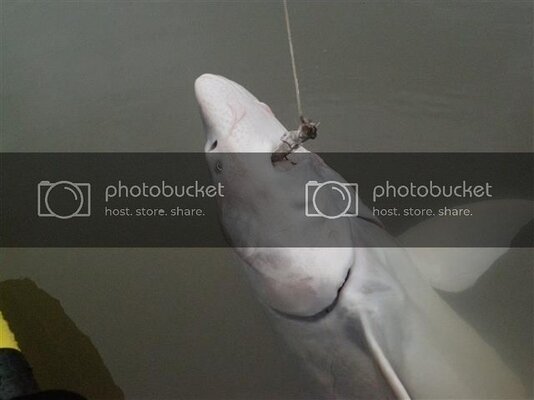 This was another nice fish that I caught on the 22nd, but I think the really cool thing is how textured the skin is under its nose. 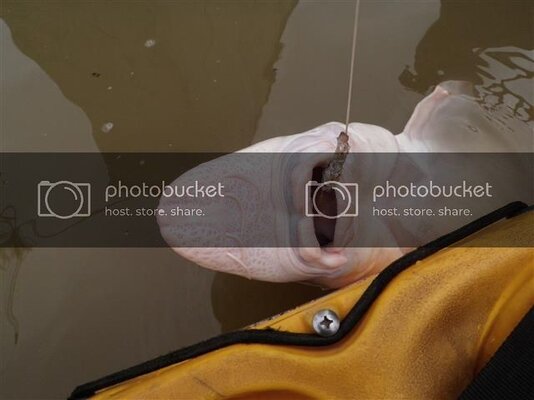 It is interesting how much browner the water was a week earlier.

It was a great last trip of the year. I already have my license for 2016 and can't wait for my first trip in the new year. You have to love living in a place where there is great fishing available even when the rivers are blown out.
S

I always enjoy your reports.
Thanks for sharing.
SF

Looking at going tomorrow or Saturday. You going back out either of those days?

amazing, that is some superhero fishing stuff!
Last edited by a moderator: Mar 5, 2018

Very cool. Thanks for the report!

Bass I was thinking of you this morning........I'm getting that rope for the anchor and want to get out soon. I think the fishwhisperer and his son went out today, hopr to hear how they do.

good write up your making me crazy.....hehehe

jamisonace said:
Looking at going tomorrow or Saturday. You going back out either of those days?
Click to expand...

Not tomorrow. We are hosting a new year's eve party tonight. I have three pork butts on the Traeger as I type I am not sure about this weekend. Right now I don't have firm plans to fish or not fish. Definitely have a bunch of honey do's that I probably need to knock out before I get back out. I will let you know if I am heading out.

Thanks MarkK and Stonefish, glad you liked the report!


EOBOY said:
Bass I was thinking of you this morning........I'm getting that rope for the anchor and want to get out soon. I think the fishwhisperer and his son went out today, hopr to hear how they do.

good write up your making me crazy.....hehehe
Click to expand...

Hey Bass, would i be able to out row the current out there in my pontoon boat? I have been dying to try it.

Berg03 said:
Hey Bass, would i be able to out row the current out there in my pontoon boat? I have been dying to try it.
Click to expand...

You do not need to go into the current at all but it is about 1 mile to the mouth. That is the furthest you would have to go. Some days the bite is very close to the ramp. I think you could do fine with your pontoon. Only thing is whether you would be warm enough. I always dress for immersion. Falling into 40 degree water is dangerous.
T

I might be down to give this a try from my pontoon too. We should get a group of us human powered boaters together and catch some!

Sent from my RCT6773W22B using Tapatalk

Throbbit _Shane said:
I might be down to give this a try from my pontoon too. We should get a group of us human powered boaters together and catch some!

Sent from my RCT6773W22B using Tapatalk
Click to expand...

Here is the Fishwhisperer and his 10 year old? son Nathan, in their toons

EOBOY said:
Here is the Fishwhisperer and his 10 year old? son Nathan, in their toons
Click to expand...

Glad to see that they had a nice day but what they are wearing makes me nervous.

At this time of the year you should really dress for immersion. If you fall in you do not have much time in water that is in the upper 30s to low 40s. Loss of dexterity occurs in 3 to 4 minutes. That is not much time to get out of the water and stop the heat loss. If you can't do that in that time period then you will be hard pressed to make it to shore. If the air temp is low then you are still not out of the woods. Expected survival time without getting warmed up is an hour to an hour and a half.

I would Wear my neoprene waders and everything I could. Luckily I now have 240 feet of anchor rope just for the Swan. Hope I don't have to worry about immersion in my boat LOL

The real issue is that everything seems fine until it isn't. With cold water pouring into your waders your would probably not be able to get back onto your pontoon. Now, the question is how much water do you take on? How much do you take on trying to get to shore? I know that the pontoons are very stable, but it just takes one instant where a couple of bad things line up and you are in trouble. Leaning over to unhook a sturgeon and it surges as you grab the line, perhaps a bit of a boat wake to that and bad things can happen fast. Sure the odds of a bad event occurring are quite low, but the penalty is extremely high.

People die each year on the big C when their boats go down and they can't get out of the water in time - even folks with PFDs. You quickly get disoriented by the cold. I know it seems like I am being overly cautious but it is better than ending up putting yourself in a potentially life threatening situation.

I looked at an immersion suit just the other day because of what you said. And I will get one for my OFC pond's. I want to do some fly fishing. So I got it.

EOBOY said:
Maybe that suit is why you last out there in all those posts that make me feel like a wimp

Sent from my Nexus 5 using Tapatalk
Click to expand...

Definitely why I can last out there. I am bone dry from the wrists up and the neck down. I wade in up to my waist and reach under my kayak to almost my shoulder to remove my wheels. I am still perfectly comfortable all day long. I don't mind submerging because I am dressed to endure it. Dressing for submersion is like dealing with power tools.

My brother's father in law was a handyman with a professional shop. He had been working with power tools for 50 or 60 years before he cut off his thumb.

Two guys I work with are very careful engineers and they both lost a finger when a piece of wood slipped - just a little.

The difference is that they only lost a finger. They were all experts - been through it tens of thousands of times. However, all it takes is one mistake, one time.

Is there a particular brand you use?

Sent from my Nexus 5 using Tapatalk
You must log in or register to reply here.