T
Thuggin4Life
ATNN: Troutdude I tryed to make this thread more enjoyable for you. You should know that i never went to engish class during high school, hated essays, and type in a not so well lit room most of the time. Also there is a slight risk of intoxication involved when reading one of my posts. Hope this is legable and i knever use spell check or go back and proof read. ENJOY!

So i took xltom, kiska, and a buddy down to florence to do some nooking yesterday and the plan was to meet up with windburnt and his other half at the ramp and give him the bait i picked up and brined for him. We ended up launching at tiernan and motoring down with the tide to avoid the boat show in florence. One of my buddies cam along to fish until 11ish and go kick it with some chick until we were done fishing. and she was gonna give us 20 bucks for gas for taking him so it was a win win even with 3 guys in the boat which if avoidable i avoid it.

no fog to speak of on the water and turned out there was only about 60 boats trolling the stretch between the barge and the dairy hole. and the wind never picked up too much along with some sunsine made it tollerable until i dropped him of and gained 9mph and looked at the extra gas we had used bulldozing the water all morning. amazing what 160lbs does to a small boat like mine. but back to the story....

get our lines wet right after first legal as i beggin giving out tidewater lessons and tossing back beers. Windburnt bumps into me about a half hour later on the water asking for his bait and proceeds up against the tide to get inline above the dairy hole and start trolling on down. about 20 minutes later a familar boat pulls up asking to borrow my pen. i reluctantly hand it over as a 25lber gets tagged out and continue on the qwest.

made a slight change in gear after a few passes and next thing i know that same boat pulls up next to me at the top of the dairy hole and asks for the pen. right at that moment xltoms rod slams down hard and stays down. I tell windburnt the pen has to wait and to get out of the way as we reel up the other 2 rods and grab the net. after a nice battle tom sits down shaking for the purest of drugs and admires his first chinook! a nice 18lber. 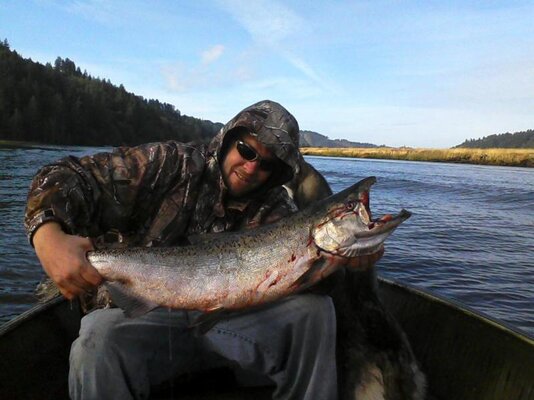 After the comotion the samll audience rolls back up and we do some pen swapping and storie telling. turns out they had a 16lber in the boat that came on the same gear again right in the same area. So we re adjust and rebait and get back to it. Bite seemed to slow during low tide but we kept on at it through the change as did everyone else. latey the second half of the day isn't so crowded but with a small crowd to begin with we didn't mind the company.

later in the afternoon and a case of beer later and a 50+ point lead we end up side buy side with the crappie jon headed right at the dairy hole. after a few minutes I start to yell right as they notice one of the rods doubled over and pulsating. we quickly make a sharp turn and i reel up our 2 rods (1 passanger lighter right as the ducks were about to kick off, for you beaver fans that was about 1230) and ready the pen. We get our gear back in and do another handoff of the ink. We must have looked silly out there tossing **** back and forth between the boats. after a few more passes we decide to leave the productive dairy hole and head down to the bay to see if there were any coho around despite all the jumpers.

2 years ago almost to the day there was a massive school of coho down there rolling all over below 101 but this was not the case this trip. we searched around for them. even going as far as the very tip of the jetties but tecknecally we never crossed the bar but easily could have. Had anotehr boat hand off since my beer was getting low along with my gas. Windburnt had never been out that cose to the ocean in his 9.9 powered 14' jon boat. It was righht around high slack. after awhile we gave up along the jetties because the tide was messing up the troll as it wanted to take us out to sea (if you didn't know i should mention i own a 12' boat with a 15hp) and headed back to meet my buddy at the ramp and head back home.

Along the way I determine that we might not make it back up to teirnan and since the crappie jon was pulling out at cushman we were gonna comander there remainig fuel. Good thing i did because i ran out of gas at the next big corner on the way up after the dairy hole. switched tanks and made it up to the ramp and met my buddy and loaded up the boat and headed home with all the sunday drivers. crazy how in the am i can do 65-80 towing a boat all the way to florence but on the way home its more like 40-50 folling cars that should have no problem at least doing the speed limit around 99% of the corners. I mean come on you dont even have a boat following you and your hitting your braskes here? get out of my way.

all in all was a good day. guide status 1 crappie jon 3 and cj 0. (turns out that girl didn't even come get him from the dock until like 2 even though she knew was getting dropped off at 1230 and then they didn't even have a good time and kicked him out 2 hours before we got to the dock at cushman so he hung there for awhile and then hitch hiked to the ramp. and said she never wanted to talk to him again and never gave me the gas money she promised. guess thats what happens when you try to meet chicks on plentyoffish) Gonna give it another go with jeanna on wednesday when i take some tai caryout home tuesday night and suddenly find myself noit straying to far from the toilet all day wednesday. If you are a lurker and you tell my boss I'll kill you.

Didn't take any pictures since i have been reying on cell phone pics until i find my misplaced camera and charger and batteries that somehow are never all in a locateable spot at the same time.
Last edited: Sep 18, 2011
R
RunWithSasquatch
Awesome! I love FIRST fish! Nice one to start with... its a good feeling. Congrats.
G
GDBrown
Oh, The adventures of Andy continue.
Thanks for sharing, it makes me want to take a long drive and try my luck, but I would definitely need someone of Guide Status with me. :lol:
My boat is like yours only 14' and 25HP. Without all the add on though.

GD
C
capblack
awesome post Andy!! as always. Brian
L
lilsalmon
nice post and looks like you had a good day for the most part.
H
Halfthrive
Dude I know what you mean about the trafic on the drive back. I hate it with a passion, drives me nuts each and every time I make the trip. Nice fish, great narrative as well.
T
TTFishon
Sweet post dude!!! Looks like a fun filled day on the water and nice fish xltom!!!
T
Thuggin4Life
You ever make it down this way i would be more than happy to sit in your boat and teach you the river in exchange for the open seat. and i got extra gear too.

Mike that was a cuttie! lol
N
nwkiller
booya way to go bro!
B
bigsteel
excellent report andy
J
JeannaJigs
I am so glad I didn't get your text until today, I woulda been insanely jealous and it woulda been just cruel. Lol why the hell doesn't Andy have a pen? Seems like he's a boy scout and has every damn thing you could ever possibly need in that tote he carries around lol. I think he was screwing with you and wanted to rub it in!
H
Hawk
Great story bro...:lol::lol::lol:
Well done.
beautiful nook fish.
Howdy Kiska pup.

D
DYJ
Good read, and well done guys.... we'll be back out this Thursday.
You must log in or register to reply here.