J
just1nook
Well started out yesterday bank fishing in the snow on the lower Sandy. Fished for a bit at one spot, nada. Moved up to below the Stark st bridge. First cast pink shrimptail jig, fish on. Tried to set the hook to hard, fish off, knot failure at the jig. I had noticed a drift boat a little upriver before the cast, was tryin to get a few casts in before it passed. As I lost that fish I checked to see if they were still coming. Guy on the boat yells, your name Chris? Well it was Snagged who I had met at Riverside before, and his passenger.. Arctic Amoeba. They invite me to join them, sweet! Craig tells me that since I've never caught a Steelie before that the first hookup would be mine. SWEET!:dance:

Well a few miles down river pullin plugs, Fish On! I missed the take while tryin to get the heater lit. Arctic grabs the rod and hands it to me ray:. With a little coaching from the pros I manage to crank her in, Craig grabs the net and Yahoo she's in the boat! 'bout 10lbs, 32" . She had a nice gash near her tail probably from a seal.

No more action the rest of the drift.

Talk about unselfish, you guys rock. Thanks for puttin' me on might 1st chromehead.:clap:
A
ArcticAmoeba
Nice work Chris! I'm glad you finally got into that first Steel, and it was a broodstock hen at that! Man, sorry my picture taking ability is so crappy, Kraig has a better one for ya! Here it is dude...Again, nice work man! 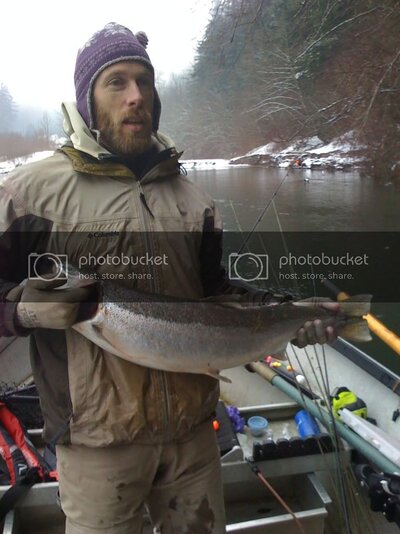 Nice fish tho...
thats a lotto rods you got there... whoevers they are...

You pull plugs from a driftboat?
Good news is my dad's new collegue he just interviewed has over $10000 of fishin stuff and a driftboat... :shock: Gotta get out... dad even said he has to get out too... first time he said that... :shock: I told him READ! Work before play. Lol...
F
FishFinger
Congrats man! I haven't met Snagged yet but I can say without reservation Ian is the rare type of people you just don't run into very often in life. Not only is he brilliant, he has a heart of gold to boot. Kinda makes for a winning combo in my book.
B
bigdog
Nice job man now the true addiction begains.
A
ArcticAmoeba

FishFinger said:
Congrats man! I haven't met Snagged yet but I can say without reservation Ian is the rare type of people you just don't run into very often in life. Not only is he brilliant, he has a heart of gold to boot. Kinda makes for a winning combo in my book.
Click to expand...

Haha, you are too kind Dan! I'm really just a pillaging river pirate that enjoys seeing folks get into fish! Snagged is one of the elite. He has his head on straight, and fishes as good as anybody does from his wicked DB. He is one of the coolest guys I have had the opportunity to fish with. I appreciate the trip Kraig. We'll do it again soon man!

FS - Yes, Sngged is one of the best Driftboat plug pilots I have ever had the privelage to hang out with. It is a very productive method from a driftboat, and it makes sense to carry a bunch of extra rods. The more time your lines are in the water after a break off, the better your shot is at a hook-up.
F
fishnquest
congratulations, chris. what a great story, and I just don't know how to say any better than you did already, you guys rock.
N
ninja2010
awesome report, man. congrats on your first steelie.

that's what fishing is all about, isn't it? having fun and sharing the experience. way to go aa and snagged.
J
Justluck
Thats a great story and nice catch! You guys are great!

Irishrover
Good job glad you put one in the boat. For the record it's legal to hitch-hike on the river Snagged did you put in at Oxbow or Dabney.
A
ArcticAmoeba
We put in at the sandbox they call Dabney.

Raincatcher
OFF philosophy at work

OFF philosophy at work

Are you kidding me??!! :shock: THAT whole story rocks big time! :clap: THAT is what this forum is about and AA & Snagged both epitomize the philosophy of Caring & Sharing. :clap: Rock ON!! :dance: :clap: :clap:
Barb

Irishrover
AA thanks for info.
A
ArcticAmoeba
No problem Rove...I'm sure you are aware of launch conditions, but you either need a long strap for the trailer winch, or a legit 4WD. The snow helped keep Snagged's Ranger on top of the sand, but he did have to throw it into 4 to pull the trailer back out from the end of the launch area. I'm sure you knew that though...

Irishrover
I played hell getiing out of there last Friday after coming down from Oxbow. Ford F350 kind of big for that sand pile. If I put in there I'm just backing up to that drop off and drag the boat from there. Sled dogs maybe!
W
Whamaglass
CHROME!!! Great job, Im jealous...:clap:
S
Snagged
Thanks for the compliments everyone, I really enjoy seeing the look on peoples faces when they get their first steel on the line. I have actually had good luck picking up hitchikers along the river. Last year I picked up two guys from the bank in Oxbow I happen to strike up a conversation with while passing close. We caught 3-4 fish the rest of the drift. I now regularly fish with one of them and he has since bought his own DB and is a monster on that river. So he get's to row me over fish now to.
As far as method and the number of rods goes. I like to pull plugs, I love hitting the nooks and crannies tickling the eddies, playing fire with the boulders and running them under the bushes. Each person needs to have their own plug rod, that's 3. I like to have the fron seaters sied drift the pocket water in between plug holes and when I get in a hurry cause I plugged too much I like to drop the trolling motor and side drift as well, that's 4 more rods. So standard load for me is 7 rods I like to have spares for the side drifting rods so you can just pick one up when you break off. Throw in Ian's drift rod and Chris's bober rod and you got a boat load.

I had a great time guys we shall do it again.

Look what I made with the guts; 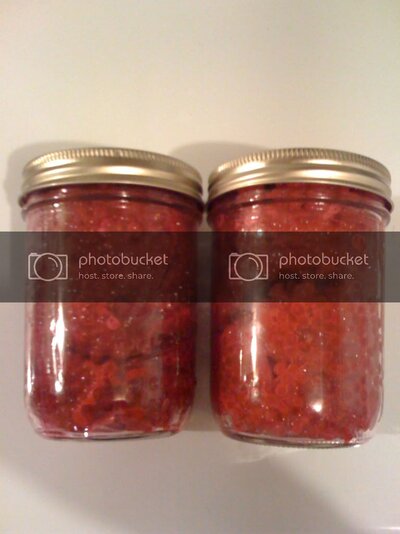 Last edited: Jan 28, 2009
J
just1nook
Careful with those jars Cap'n.
J
joesnuffy
great fist chrome story, I imagine you won't soon forget that trip.
B
bigdog
That is a great story something you can remember for a long time to come. Not everyday you get to get picked up on the side of the water like that. So whats with the plugging I have never done that before but hear about it a lot? Well with out a boat would be one of the reasons I have never pluged but still wounder what it is?
You must log in or register to reply here.

Spoons with a D.A.M. Quick Reel

Great day out of Willamette Park