Finally upgraded to something a little safer - Ascend 128X Kayak. I'm 6'3" and 280lbs and my Ascend FS12t was not enough to hold me. Had to keep the scuppers in otherwise the rear cargo area would fill with water, caught a ton of fish out of it though! 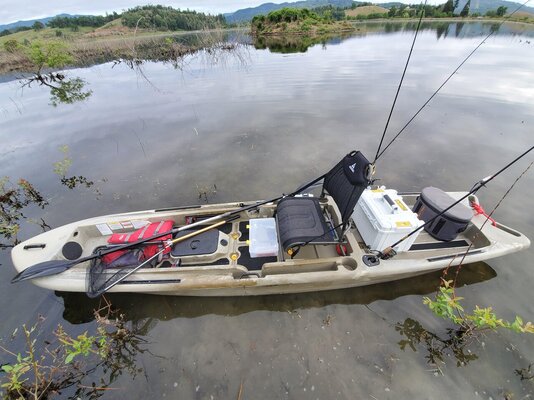 Kayaks are real hard to find right now, looks like Ascend released this model in Feb/March of 2021 so there's not a lot of info on it. It's a touch smaller than the 133X, I believe 4" shorter and a couple inches narrower. It has a pre molded area in the rear for a rudder, trolling motor, or power pole. Also comes prewired with a button pad and 12v plugs fore and aft for lower amperage electronics. (Right between seat and hull access)

I've been playing around with layout and only had about 6 hours in it so far.

-hold me without sinking, I can even remove the scupper plugs
-very comfortable seat
-way more stable than my old 12, and paddles better too even though it's a bathtub
-way more deck space
-seat has 2 positions, one lower and further forward, the other higher and further back (definitely need the high position if your over 6' tall)

-ascend took some shortcuts. Instead of screw style 4' portholes, they just used plastic rounds
-1/4 of the screws used to hold rails and stuff from the factory were over-tightened and spun in the plastic
-while the seat is comfortable, it's a major waste of space. The frame underneath is huge, you could easily put a drawer in it's place
-no paddle holder
-the skid pads are huge and square with sharp corners, I did sand mine down a touch with an angle grinder just to break the egde
-no bungee storage areas, they make additional kits but it sure would be nice to have flush mount anchors in the deck for it

Some of this stuff I can modify, changed up my old cart as well, I believe the kayak is just under a 100lbs but the hull is very different from the FS12t, so none of my storage or transport stuff works with it. I have seen a few terrible reviews, holes at the seams, cracks, you name it. But mine was absolutely fine, just make sure to check it in store.

I'll plan on swimming one of these days and test out the stability standing up. 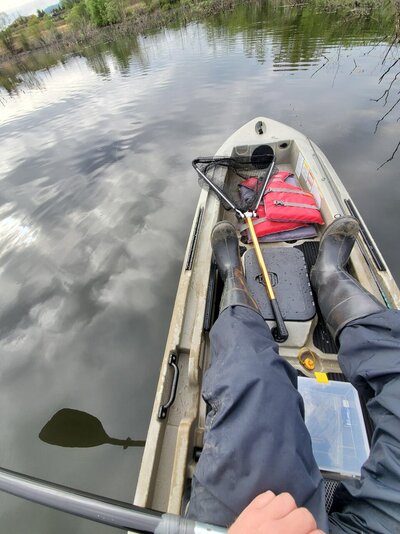 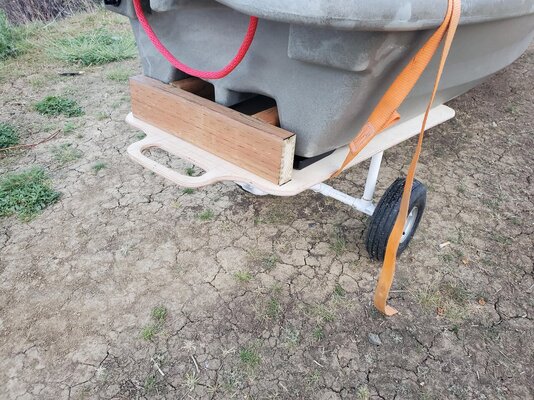 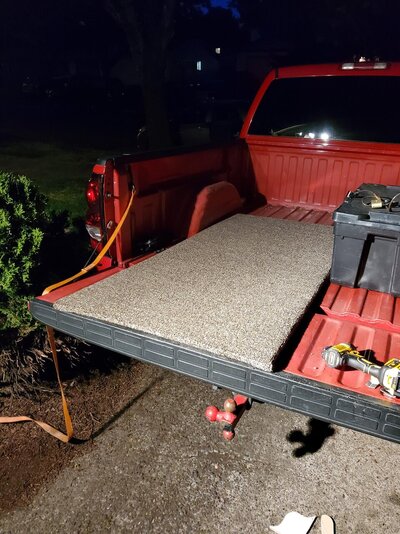 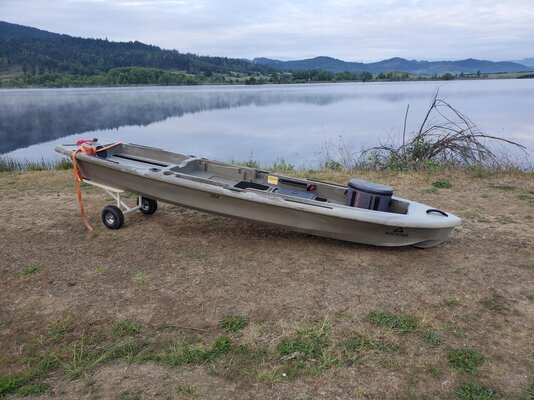 Here's the rub pads, actually some weeds in the front one 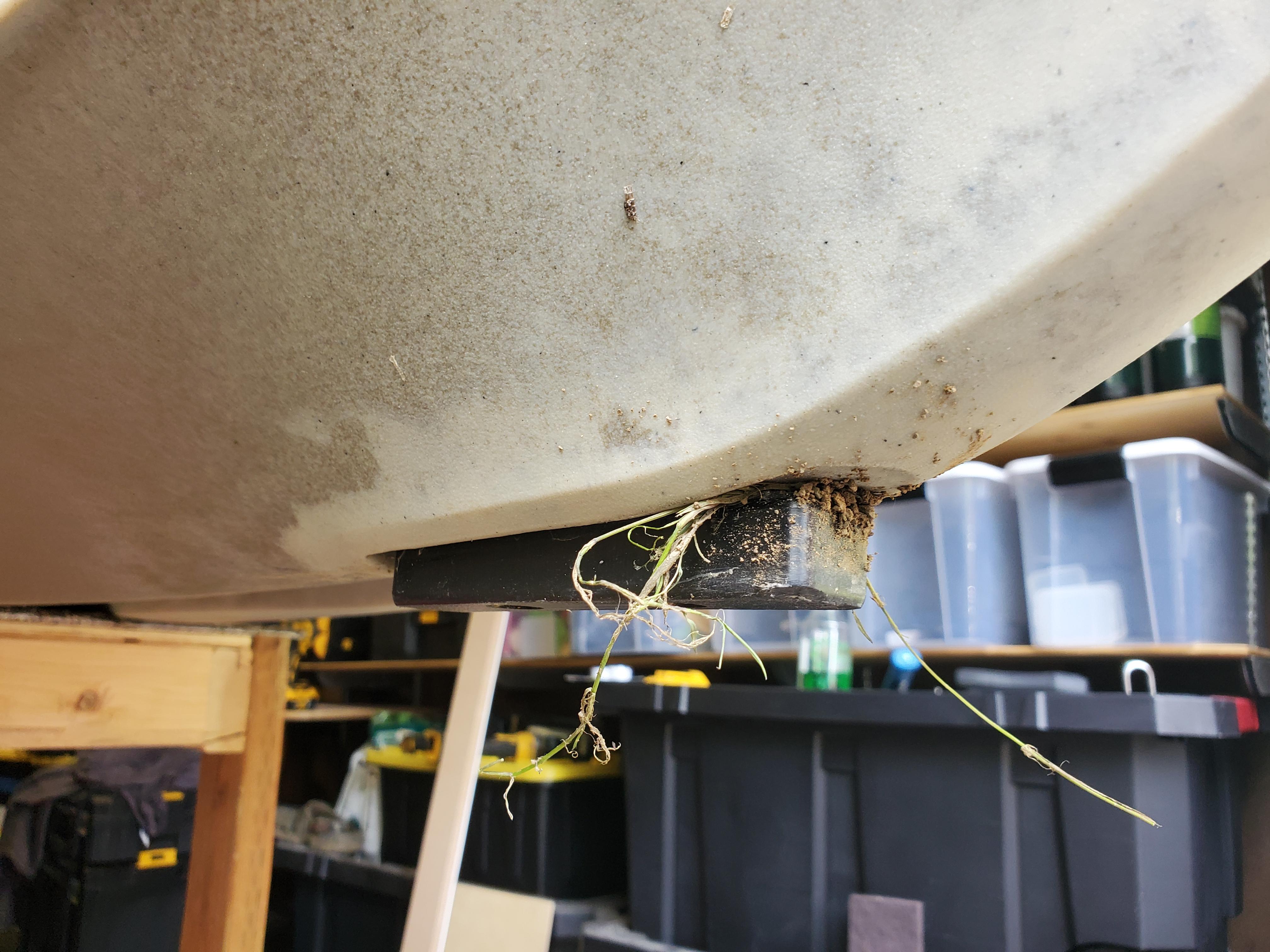 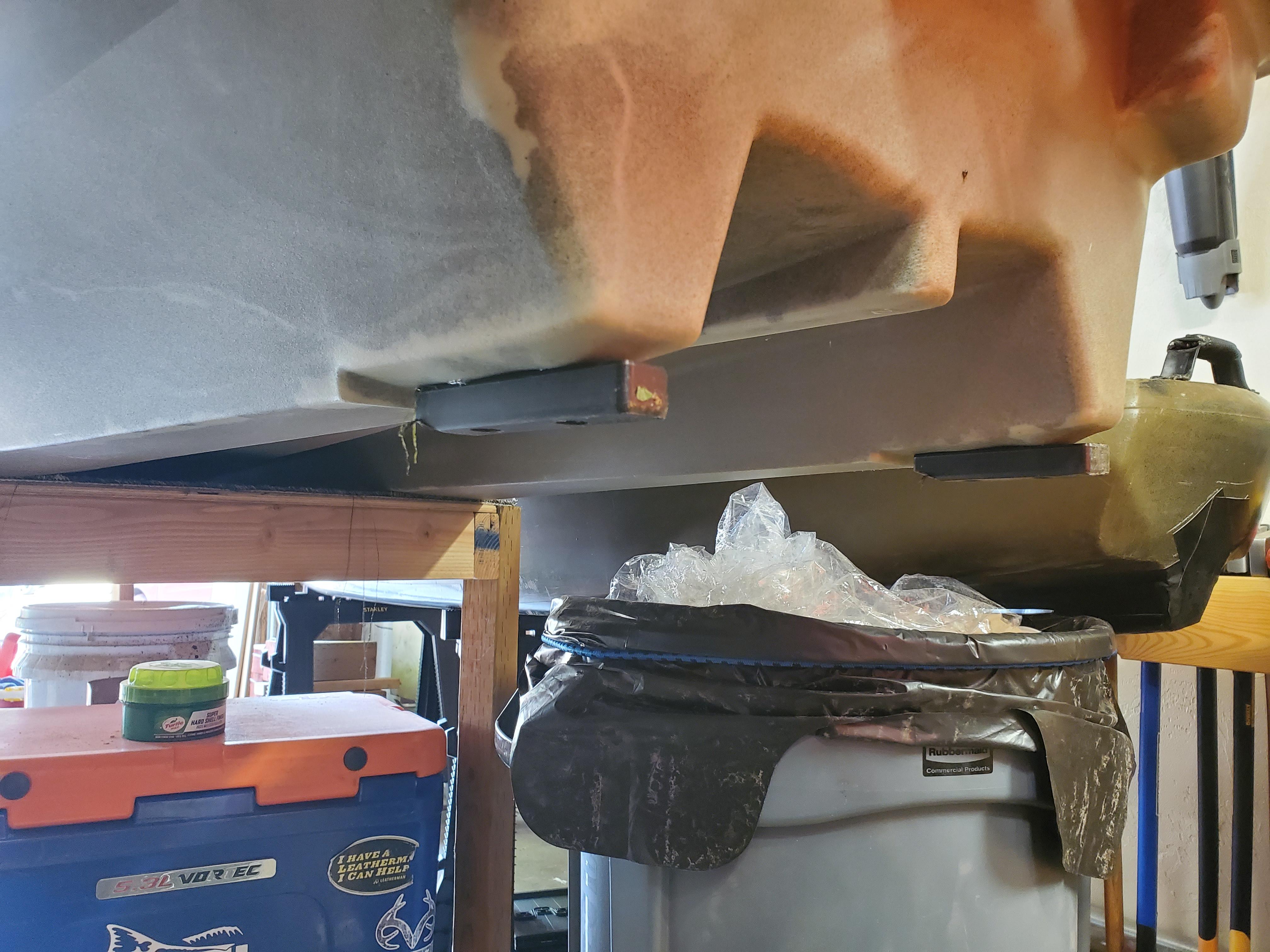 Definitely don't understand this large waste of space, would rather it be more deck space for sure 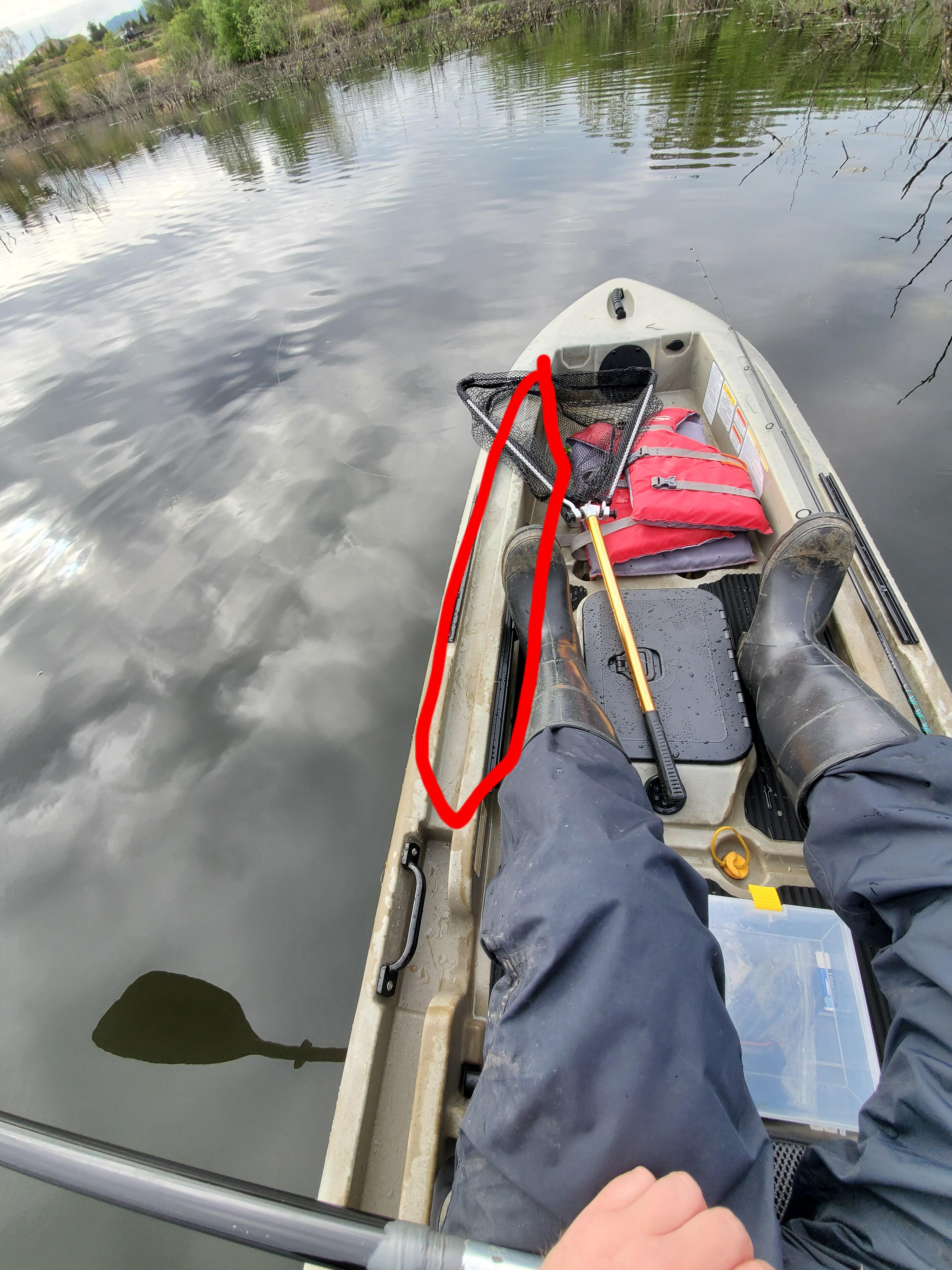 That looks really sweet! The width of the gunnel may be for overall structural strength. The trough probably shallows towards the front to accommodate longer rods without bending them. I like the squareness of the front and the back, that really looks like it adds a lot more space at both ends.

It is weird that the big space under the seat does not have easy access. I guess you could put emergency stuff under there or things you don't mind having to go to shore to aaccess.

That's my only thought as well on the gunnels, I've seen someone lay their rods in there, but the reels don't really fit down in there. The flat space in the rear does have some molded in 1/4-20 nuts, I'm undecided on rigging a trolling motor, rudder, anchor pulley, or power pole. Need to start with a paddle holder and some bungee tie downs first!

It is so much fun to get a new craft and be looking down all the possibilities!

I have those molded in 1/4x20 nuts at the back of my kayak as well but I have never done anything with them. If I fished more shallow water areas then I think I would be tempted to get a power pole (or make one), but I am rarely shallow enough for that to be useful.

I agree that a paddle holder and some bungees are a great place to start. I have always found that I get a much better feel for what to modify after I take a handful of trips.

I'm usually the exact opposite, 10-12' is usually my deepest and even that is sparce, which is the reason I didn't go pedal drive. Do you use an anchor trolley for deep water? Definitely adding a Scotty rod holder dead center on the front hatch. Ordered a bungee kit and some stainless eye's for the rear track. I'll need to strap the cart to the kayak when I use it.

Haven't decided on paddle clips, really only 3-4 options and they all have drawbacks it seems. Trying to think about left and right sides as well, pliers on the right, because I'm forced to hold fish with my left. A dedicated net holder that sticks out 90° would be ideal, something to hold the fish in the water while I grab a scale or my phone.

Got some stuff on the way, ordered a slim cooler so I can try and get more weight at the front. Picked up a bungee kit and some some stainless eye bolts for the rear track. Also got a stainless ratchet strap for the truck and a loop strap for the cart. I think I've decided on a power pole or anchor system for the rear. Keep it simple, would be nice to adjust less with my paddle.

Drilled my first few holes in it. Never something to look forward to

There must be 2 different sized track systems, the bolts I ordered didn't fit at all.

Rod holder and paddle holder are in, going to wait on a bungee system until I settle on a layout

Cooler up front, tackle and life jacket behind me. Should bring some weight forward if I plan on anchoring off the back. 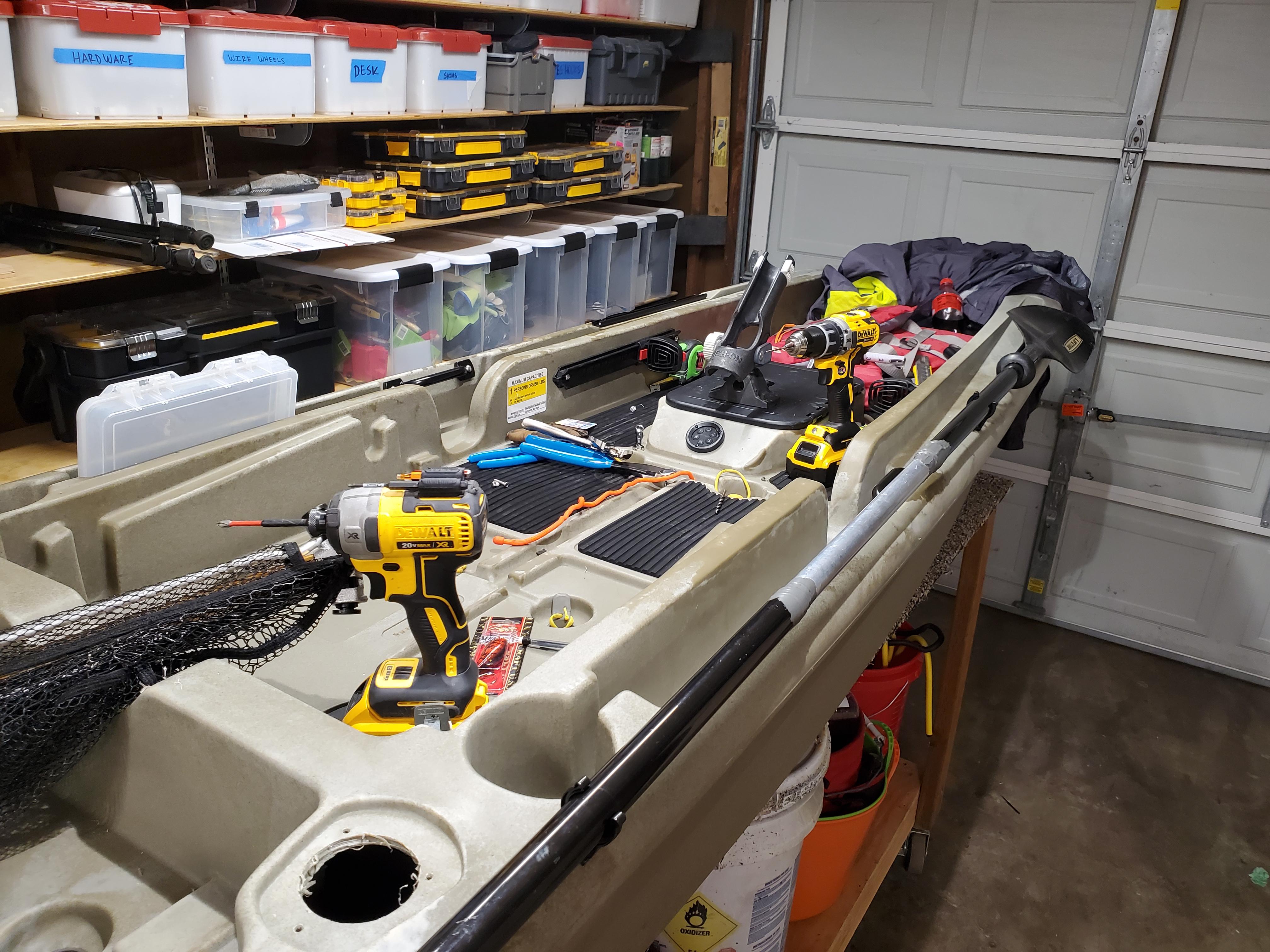 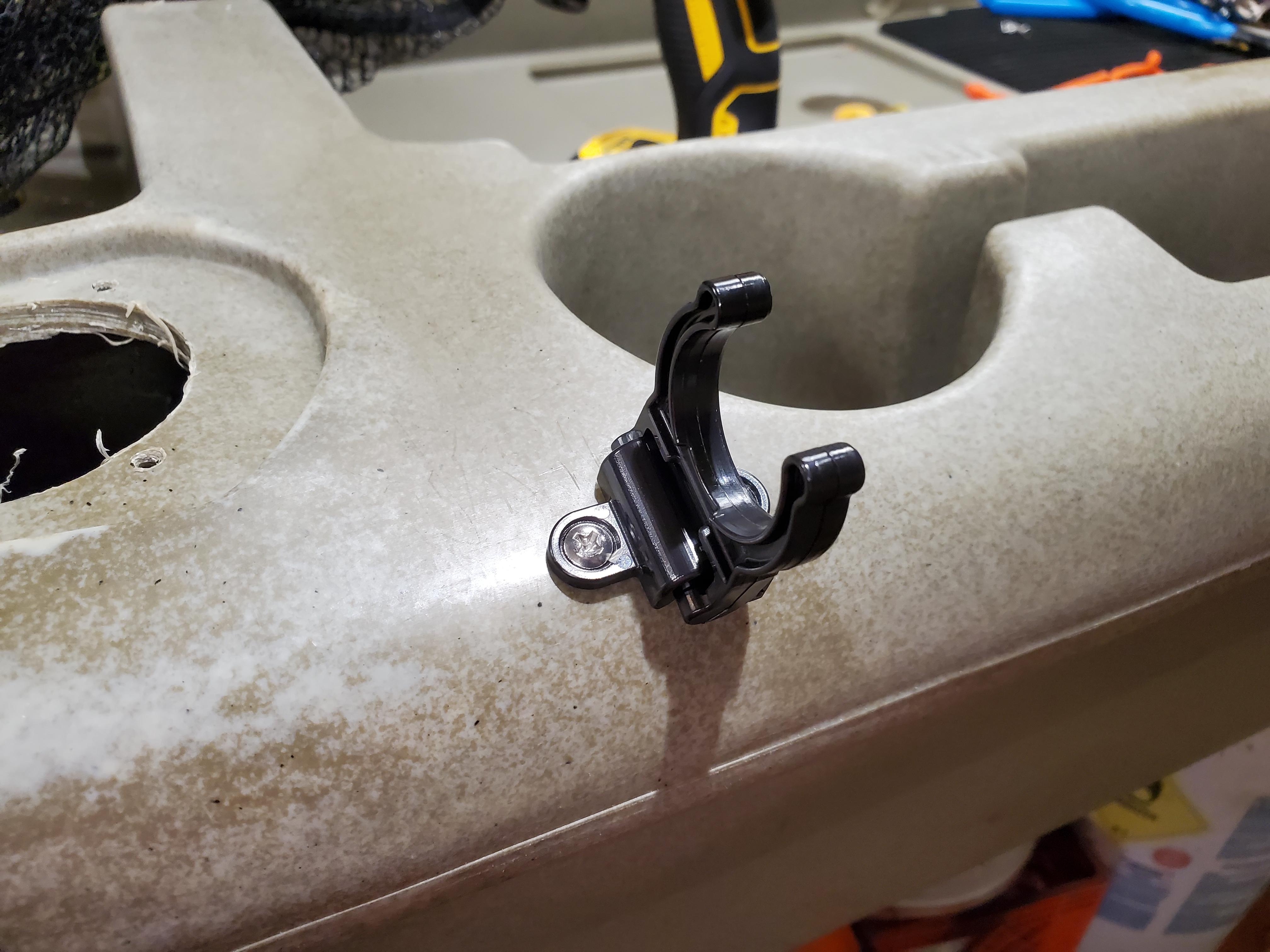 Budget friendly anchor wizard for now. They are out of stock everywhere

Bought the stuff to make a new PVC cart, cut the old one 6" shorter first to see if that makes a difference 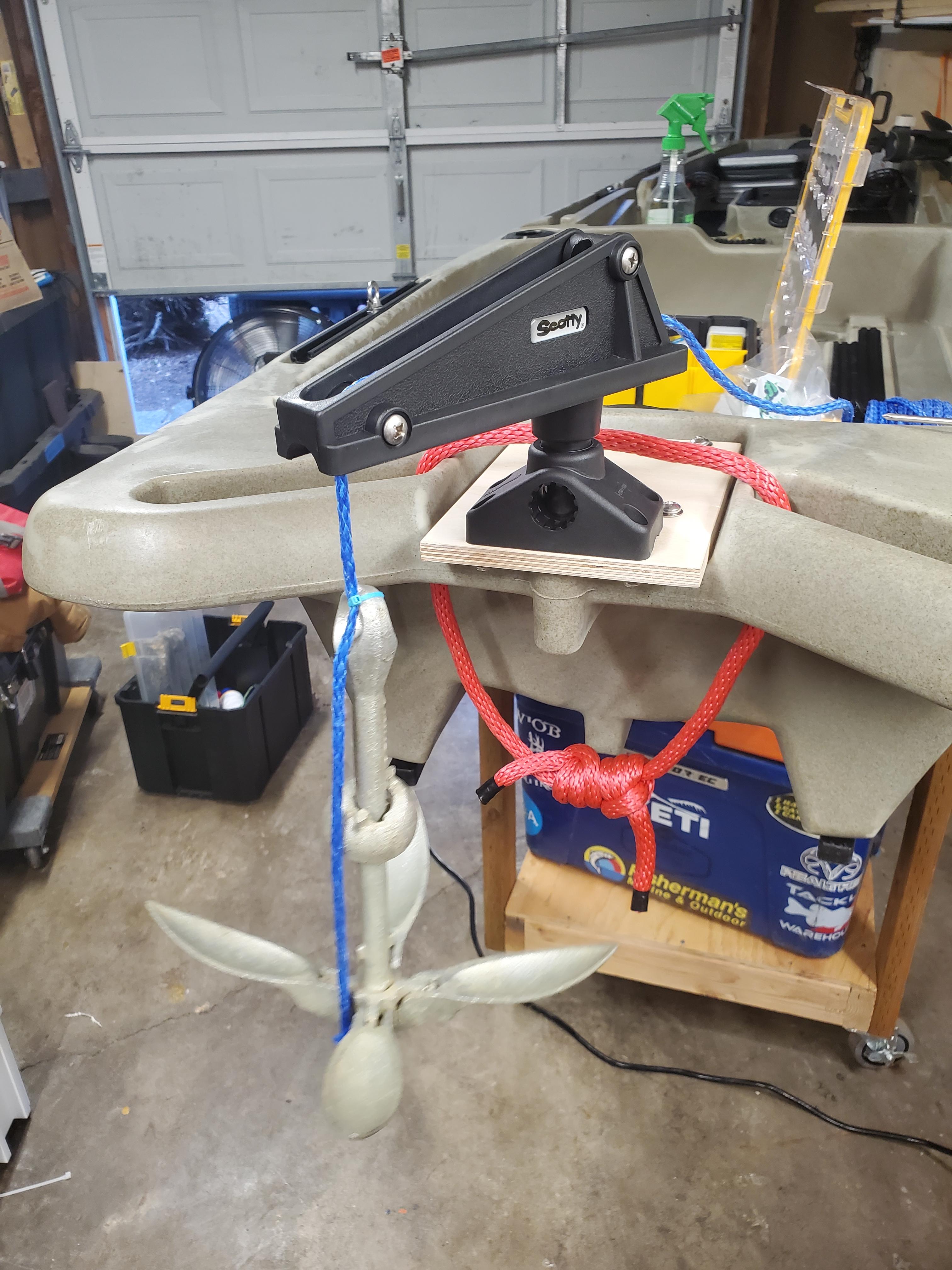 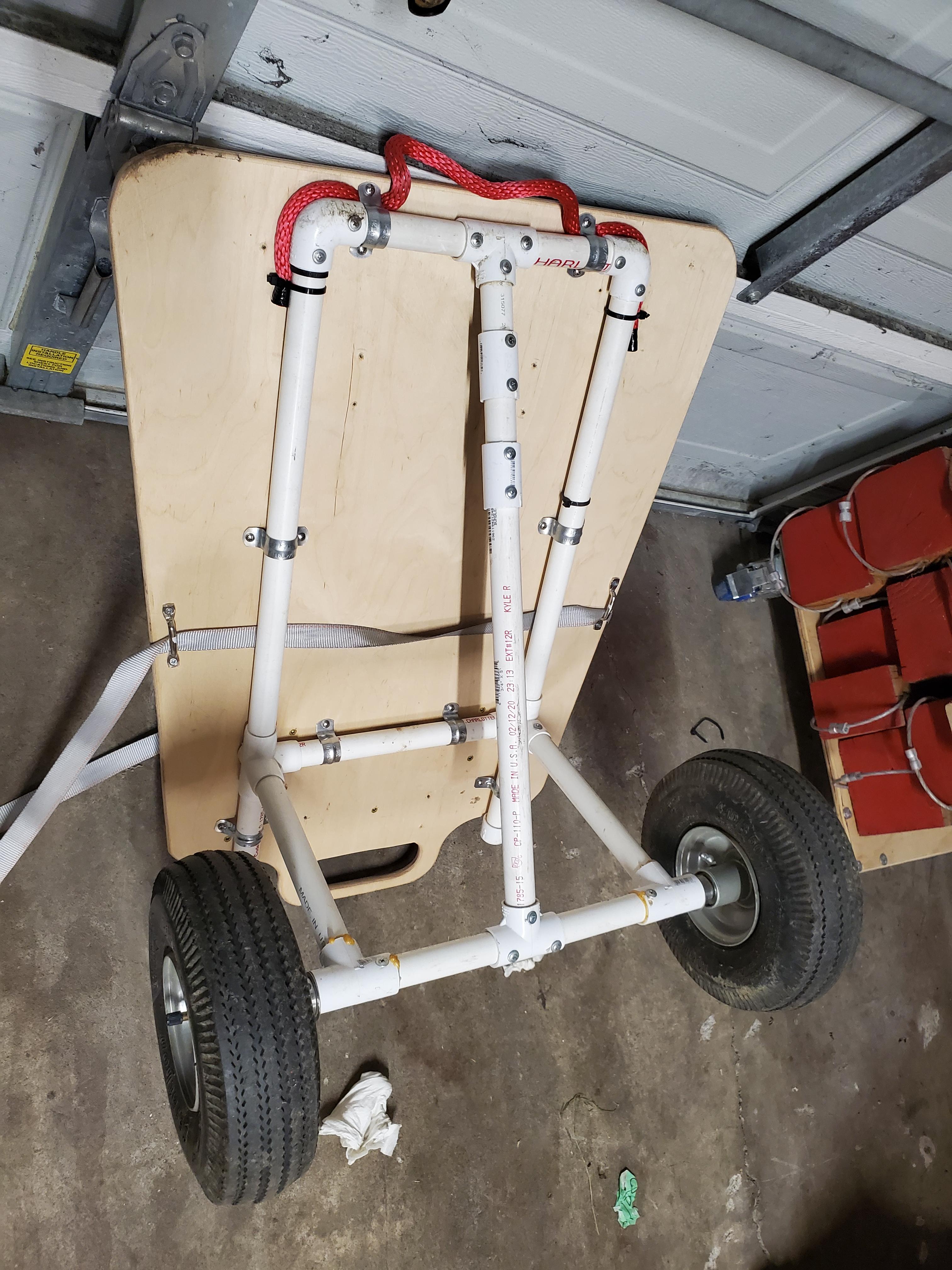 Looks good but here is a couple of pieces of advice.

I started out with those grapple anchors but I came to hate them. I now use a 10lb pyramid. A good budget choice would be a 10lb dumbbell.

I built a PVC cart that I use with my Frontier and Coleman Crawdad. I like have the pvc pipe act as bed rails. That keeps the keep act from skewing and slipping on the cart. I would worry that the flat surface of that board will allow make it hard to get the kayak to sit nicely on the cart - especially if loading at a steep ramp or if traversing a bit of a sidehill. If that board fits between the bottom pontoon like parts of your hull then ignore what I am saying. If the design is to have the pontoon parts of the hull sit on the flat part of the cart then I would be a little concerned with that.

For ponds and small, flat places the cart advice likely won't matter but if you want to try and fish large lakes with busier ramps it is something to consider.

I don't actually use the grapel part of the anchor, I leave it closed and use it as a tear drop, I looked around yesterday for something else but Cabela's and Sportsman's didn't have anything under 10lbs, I do have an old sledge hammer head that might work though...

I was thinking about some PVC bunks but the bottom of this kayak is flat, so it's flat hull against flat board, and the 2x4s line up inside the 2 outer hulls (somewhat catamaran style)

After cutting the cart shorter, it worked great today, didn't tip in either direction, just need to practice getting that strap around

Any suggestions for an anchor that won't hold weeds? Almost need an upside down pyramid anchor (or right side up pyramid?)

I switched to a 2.5# plate which seems to hold just fine 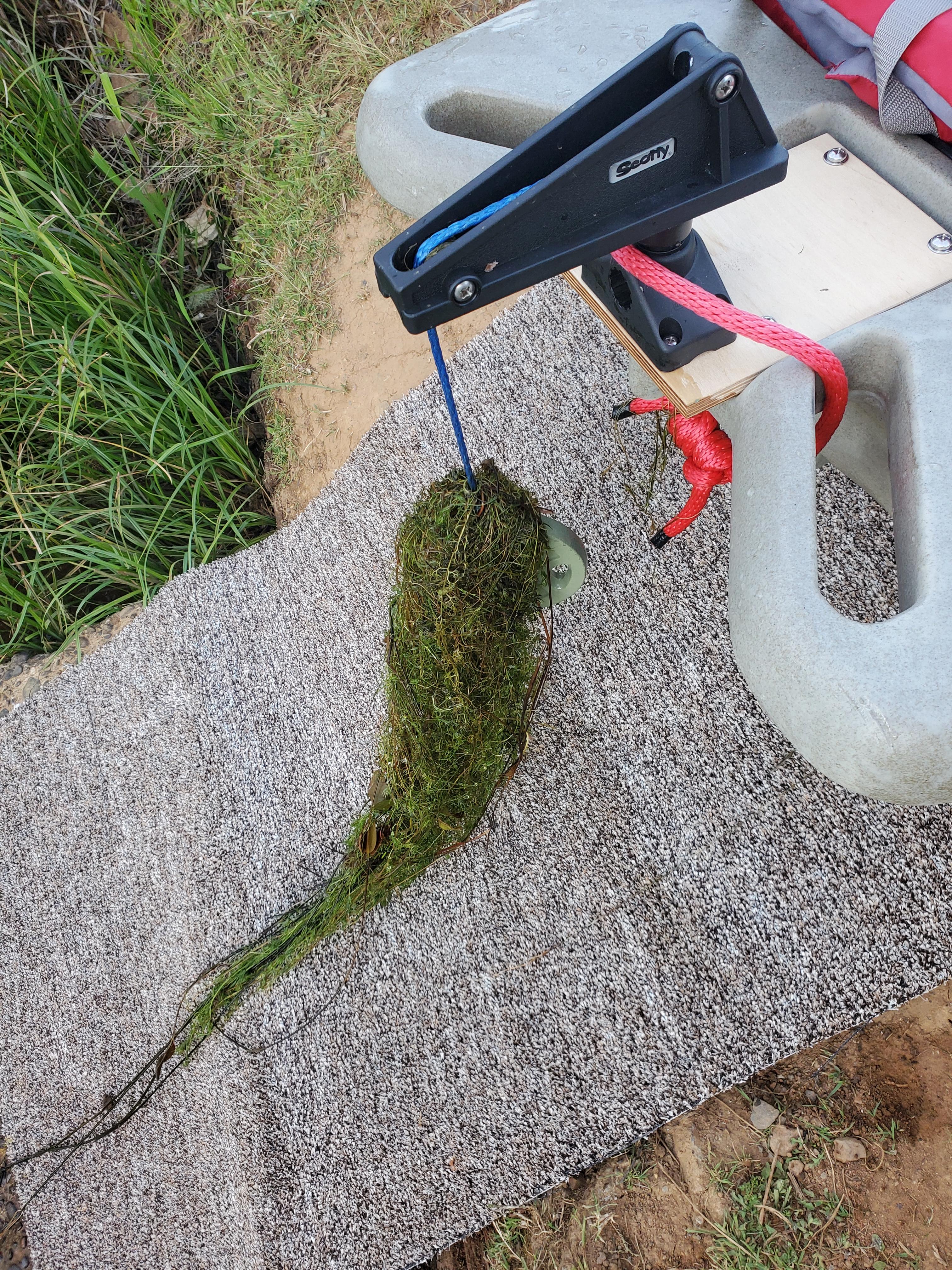 I know you are a DIY guy so one suggestion is to get some PVC pipe fill it with cement and have an eye bolt down the middle. In NC my one friend found a bunch of window sash weights at the dump and those worked well (with enough of them). The other suggestion is to just get a 5lb or 10lb dumbbell and tie to that.

Of the above I think the PVC pipe is the most weedless since it is long, skinny and connects from the end. If you don't have cement handy you could fill it with sand and haven caps at each end of the PVC to keep the sand in place. That might even work out the easiest since you could weight the sand out to whatever you wanted, dump it in a long tube and then cut to length.

Been looking around on Facebook and seen some similar ideas. Someone mentioned putting the cut top of a coke bottle above the weight, let's the weeds flow off

I like the pipe idea, also seems few people using down rigger weights

You don't think a dumbbell would hold more weeds? I thought it would have more edges to hold stuff, but I did like the rubber coating for storing one in the yak
Last edited: May 27, 2021

The dumbbell is probably not a great idea. The 2 liter bottle top sounds like an interesting idea. I think I would go one further and buy a funnel and cut it so that the rope can barely fit through. That would be lot more durable and I think even better as a weed guard. I think adding that to any anchor makes sense.

The only way the dumbbell makes sense is if you could drill into the end of the dumbell and anchor an eye bolt or perhaps some dumbbells have a hollow bar then you could put a bolt all the way through.

Last thought is that I know one kayak guy used to have are really heavy chain of some length that he used as an anchor. I am not sure where you find one of those massive chains but if you could luck into one that would be pretty ideal.
Last edited: May 27, 2021

We do sell chain up to 3/8" where I work, the problem is anything longer than 6" or so will drag in the water from the anchor trolley, and grab weeds at the surface. Not sure how well a chain would hold in the Umpqua unless it snags in a crevice.

By design, an anchor will grab onto something to prevent slip. You may need to tailor your design to your needs,

I sometimes use a 2 gal plastic bucket filled with rocks and holes in the lid. The combined weight of the rocks and parachute effect slow down my canoe drift, while the smooth plastic doesn't encourage snags. Can be hard to lift up sometimes, but I usually only pull it up a few feet when moving to a new location.

I have settled on a 6 lb. downrigger ball for my kayak anchor and it seems to work fine the places I go.

NKlamerus said:
We do sell chain up to 3/8" where I work, the problem is anything longer than 6" or so will drag in the water from the anchor trolley, and grab weeds at the surface

Not sure how well a chain would hold in the umpqua unless it snags in a crevice
Click to expand...

The chain I was talking about was like for linking railroad cars or something like that. I think 2' weighed well over10lbs.
You must log in or register to reply here.