F
Fisherman.Z.
My uncle who is stationed at mcchord afb in washington sent me this story from the washington fishing forum he belongs to. i thought it was good enough to tell everyone about!

As some of you may already have heard, last week, on Friday, 20 February I was out fishing on the Hoh River with Shirley. It was a wonderfully clear
day, the temperature a little below freezing and a herd of elk were grazing
in a Riverside pasture. The river was running exceptionally low and clear
and we were swinging flies through some attractive water. I was using my
15-foot Spey rod, Shirley was using her eight-weight, single-handed rod.

There had been little action but I had seen one good-sized fish roll a
little ahead of me and, for a brief few seconds, I had hooked into what
appeared to be a 12-pound or 15-pound fish. At around 2 PM I was swinging my
fly through some good-looking water and something that I can only describe
as a lightning bolt hit my whole body. Suddenly my Ross reel was screaming
at a decibel level usually reserved for Rolling Stone concerts. In a couple
of heartbeats 200 yards of line had disappeared from my reel as the fish
headed for Alaska. I told myself not to panic, but my whole body was
shaking; I knew that if I could survive the first round I would at least
have some chance of getting the fish to the bank. For the next 30 minutes I
battled the fish, standing at times chest deep in the middle of the river on
a submerged bar.

At this point I had not seen the fish, but eventually I managed to make it
back to the river bank and was able to stand on dry ground. At that time the
fish exploded into the air, executing three cartwheels. I couldn't believe
my eyes, the fish was almost 4 feet in length. I had never seen a steelhead
like it. After 45 minutes of battling the fish I managed to beach it gently.
My intention was to let it go, having first measured the fish, but it was
bleeding quite heavily from the gills. As it seemed likely not survive the
ordeal, and because it was the fish of a lifetime, I decided to take the
fish. In 10 years of fishing Washington state rivers this is the first fish I have ever taken, of any kind, from a river.

At this point, several boats appeared, heading down river. In one of the
boats was my good friend and mentor, Jim Kerr; with him in his boat was a
state biologist, who measured the fish and took some fish scales. A couple
of other boats arrived and had spring scales with them, and we weighed the
fish. One set of scales said 31 pounds and the other said 32 pounds. The
fish was dragged for about a mile through the forest to our parked car and
then taken to Olympic Sporting Goods in Forks. We weighed the fish on their
scales and it registered 31-1/2 pounds.

As many of you already know, there is a formula for estimating the weight of
a fish. In essence you square the girth of the fish and then multiply that
by its length and divide by 800.. My fish was 44 inches in length with a
girth of 23-1/2 inches. That would result in a fish weighing 30.38 pounds.
It was not until the following day, 23 hours after the fish had been caught,
that I managed to get the fish to a State-accredited set of scales, at Key
City Fish Company in Port Townsend. The fish had obviously lost a little
weight due to loss of fluids and bleeding, but it still weighed 29.5 pounds
at that point.

I have subsequently contacted the International Game Fish Association to
check on records for fly-caught steelhead. It turns out that the existing
world record for 8 kg tippet is a 28-pound fish caught by Chuck Stephens on
the Skeena River on 20 October 1985, 24 years ago. I am now in the process
of submitting my fish of last week as the new world record. On further
research it also appears that this would also be the largest steelhead ever
caught on a fly rod for all tippet classes.

Hopefully you all enjoyed the story and the pictures. Many people got to see
the fish before I dropped it off at a local taxidermist. One state biologist
confided in me that he was 62 years old and had personally caught over 5000
steelhead and that this was the biggest steelhead he had ever seen in his
life. Another chap simply shook me by the hand, looked me in the eye and
said, "This isn't the fish of a lifetime, it's the fish of a thousand
lifetimes." 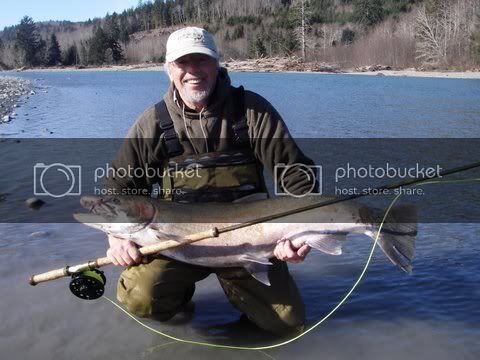 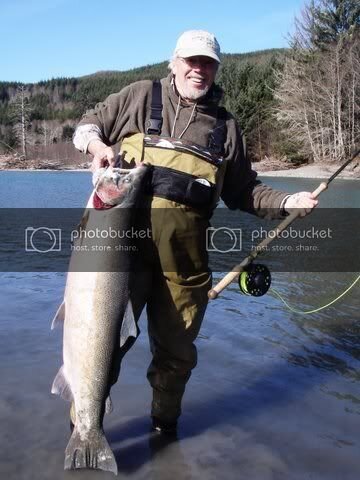 Irishrover
Wow that a nice fish, and on a spey rod. Now I know what I'm doing wrong I'm going to grow a beard!
F
FishFinger
Great story, and pictures to back it up. He's right, that is; without question, a fish of a lifetime. He might have been able to land it with the 8 wt, but the 15' spey was the right rod at the right time.

Thanks for sharing the story.
M
mikeredding
wow
C
chrishophoto
One question...

I noticed that this was a wild fish. Is it legal to keep these up in Washington?

That is one amazing catch!
L
luv2fish
Thats a behemoth....thats what we all dream of...isn't it......the bone rattling , teeth gritting....and swerving every inch of your body to get the giant landed.....wow.... just wondering about the fight that fish would have put.....WOW....I fought with a beast...grrr.....aaaaaaaoooooooo...i'm on top of the food chain...
Not that dark though considering the size.....HOH, humtulips cradle the giants.....
G
GraphiteZen

luv2fish said:
Thats a behemoth....thats what we all dream of...isn't it......the bone rattling , teeth gritting....and swerving every inch of your body to get the giant landed.....wow.... just wondering about the fight that fish would have put.....WOW....I fought with a beast...grrr.....aaaaaaaoooooooo...i'm on top of the food chain...
Not that dark though considering the size.....HOH, humtulips cradle the giants.....
Click to expand...

I was being a little sarcastic. Can't really say anything bad about it, what a beast!
F
Fisherman.Z.
i know

i was on the phone with my uncle who sent me that when i looked at it. and i was literally speachless:shock:... i would love to just see a steel head that big, let alone to catch it. i would pass out....
i thought everyone would like that! :lol:
i was pretty please with the guys story too, just enough details to make a mental movie! Awesome.


also idk about if you can keep wilds there. i dont think so, but it could be special regulations for him, or the river. i will ask my uncle.
A
ArcticAmoeba

chrishophoto said:
I noticed that this was a wild fish. Is it legal to keep these up in Washington?

Many rivers in WA either don't do fin clips, or you are allowed one finned fish per year of each species, on of quite a few of the OP rivers in particular. The Hoh has a gradient like no other stream on earth. Only the largest, most aggro fish make it back. I love that river, and its neighboring body of water is the one where I caught my largest bug-bashed Steelhead ever.
F
Fisherman.Z.
man if it was a one finned fish a year deal than that man just got blessed by god to catch that one!

are natives usually bigger that stockers? ive only caught cohos for ocean salmon but the biggest one i caught was a native. JW
L
luv2fish
I haven't fished at Hoh..but i've stopped there several times..and its one gnarly river...i would love to fish there...i've heard a lot bout it....i guess me and my freind john have to go there ....next stop...Hoh
A
ArcticAmoeba
It really depends on what the hatchery genetics are, compared to the resident run of Salmonids. But on those particular rivers, I will say the bigger fish are the ones with big 'ol rudders for an adipose. The old school, un-fudged with nates are generally more healthy, for sure. But many, many fish with fins these days are just naturally spawned clones of a clipped fish that spawned in the river. Has happened a lot in the last 5 years due to funding, and management issues.
M
mikeredding
Not all hatchery fish are fin clipped. Notice this fish still has thie adpose fin but look at that tail. Hatchery fish for sure. Besides this was caught at Diamond Lake after they killed everything off.

Ward Prater holds his new "post treatment" Diamond Lake record trout. A 25 inch, 7 and 3/4 pound Rainbow. A night crawler floated off the bottom in ten feet of water did the trick.

L
luv2fish
my suspicion was right.....i thought so ...so ODFW is not clipping the hatchery fish ...to make a run look healthy....i donno why always the power is given in a hand of a Moron.....i mean cmon we just got rid of one in 2008....
J
JeannaJigs
!!!!! I'd have peed my pants!
A
ArcticAmoeba
Hold on a moment... The state does require that our little friends raised in concrete pools get a distinctive marking of some sort...IE adipose, ventral, and maxillary clips. Trout are not included. ODFW is not simply neglecting to clip fish, they do. And will continue to do so.
M
mikeredding

ArcticAmoeba said:
Hold on a moment... The state does require that our little friends raised in concrete pools get a distinctive marking of some sort...IE adipose, ventral, and maxillary clips. Trout are not included. ODFW is not simply neglecting to clip fish, they do. And will continue to do so.
Click to expand...

Why are trout not included?
There are lots of places that fin clipped are the only thing that can be kept.:think:
A
ArcticAmoeba
The regulations, and rules the state has set forth, that have to do with trout, are not the same as the ones that deal with Salmon and Steelhead at the hatcheries. Trout are just not included in the Anadromous fish regs. Thats all. All hacthery Salmon and Steelhead get clipped in OR, or they intend for them to get a clip of some sort. Many, many get missed. But not all the trout get clipped that get dumped into ponds/lakes.
You must log in or register to reply here.