My first steelhead and he was a big one!

O
Oncorhynchus
Well went to the Wilson to day with Kris i got up at 3 AM to go meet him at 4:30 and we were fishing down low by 5 something. Well after only seeing a few summers and catching a ton of big and not so big cuts we went up the river we found a nice hole and who did we see down there. Mark from First Bite 3 cast and boom cromer on for him we were happy to see someone get one we offered to help him net it but he did it him self. It was a nice 7 or 8lb cromer we were stunned he gave us a few pointer and a jig and some shrimp each. Thanks Mark!!!! Well we started to fish were he had been and started to see a lot of fish come into the hole we were getting exited and after about a hour of trying real hard at them Kris called last casts so i casted and he casted then i hear a grunt and look over at Kris who's rod is doubled over and his cork down at least 2 feet under water. 3 or 4 Min's and 2 huge jumps later i managed to toss his fish on bank he proceeded to tag and gut it. He was using the Jig mark gave him. I tied on a Purple Jig the color Mark was using and fished it for a good 10 Min's. I was about to call ti quits when i noticed a huge fish hugging the rocks i threw two casts and the second headed right for him. I looked over at Kris getting ready to toss a few casts and then when i looked back my bobber was under like 4 feet i set the hook hard and yelled "FISH ON *%$% YA" I was so happy at this point but i new it was going to be a long battle and it was he stayed down deep and made tons of real hard runs just peeling line of my reel. Kris coached me in fighting him as i went along and 30 stressful and exiting minutes later Kris tossed him on the shore. He was a big boy and My first steelhead he was 13lbs about and was nice and bright. I was covered in blood and sweat and my arms were hurting but i had a huge grin from ear to ear. The pics were taken after i brought him home in the cooler and do not show his color to well also he looks small but thats cause im 6,7 and 245lb,s. Its been almost a year since i started steelheading so im very happy.
Thanks to Kris,Mark,And anyone who has taken me fishing or given me tips.

Sorry i have not posted much resently been fishing to much to post and i frogot my password. 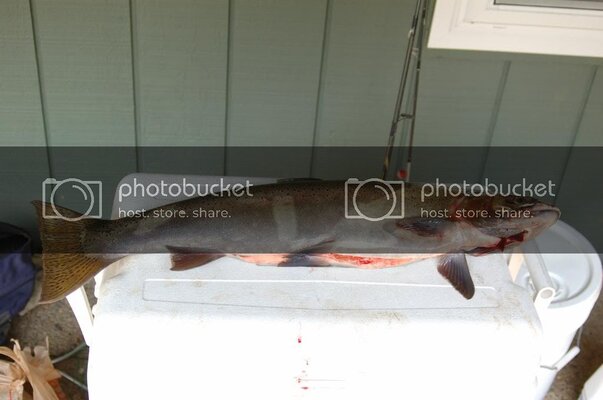 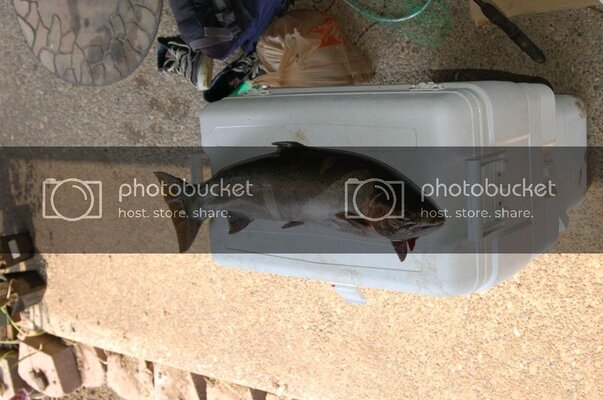 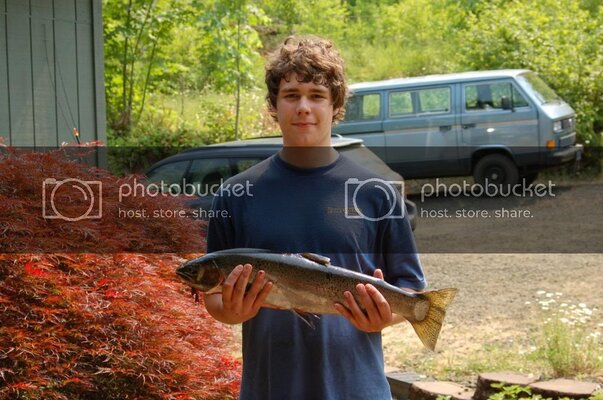 T
The Nothing
nice chrome

My first Steelie was a great moment for me as well. Now if I can just land a Springer
J
JTLunker
Nice job Bro! You worked hard for that one. The first is a great feeling. Congrats!
Z
ZeeBorn
sweet! nice to see you got one. we should get together for another day of fishing some time. I have yet to hit the Wilson this spring/summer
so many fish so little time.

18406ej
Good to have you back! Thanks for the report and congratulations.
O
Oncorhynchus
Ya Zee that day this winter was fun agien sorry about that fish . Ya im down to go steelheading anytime i have free time. But sadly with work and everything else i dont have that many free days were im not recovering from the day before.
Last edited: Jul 3, 2008
Z
ZeeBorn
Hey man don't sweat it thats just how it goes some times and there's nothing for it. Well the next time I'd be able to get on the Wilson would be the 19th/20th of this month. Let me know if you think that might work for you and well go from there.
T
The Nothing
i'm getting kinda jealous now... was out on the willy this morning and saw the chrome jumping all around me. alas, i have no tags...
O
Oncorhynchus
If you ever want to come chase some crome issac i will teach you what i know out on the wilson or any of the other coastal rivers i fish. If its summers mabey we could get a bit of herping in to i found 3 adalt dicomptadons last time i went winter steelheading on the wilson.
T
The Nothing
Sounds like a plan man!
F
FishSchooler
Thats a nice steelhead! I wish I could catch one... The second picture with the weird angle makes it seem like that it's a floating fish. =D
You must log in or register to reply here.