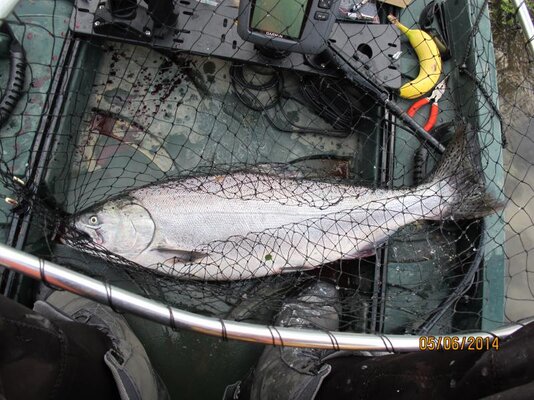 Notice the banana for scale? I'm one of those taboo banana eating guys who eats a banana on every fishing trip. 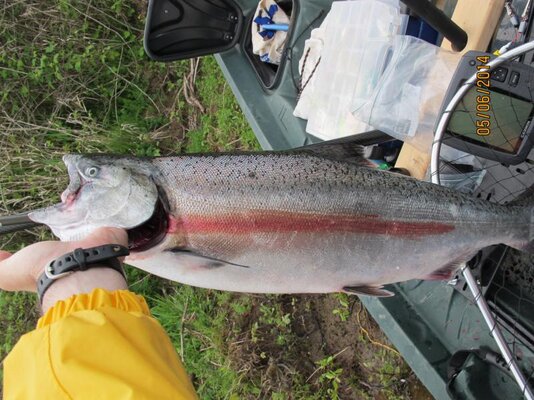 Launched the NuCanoe at 5:45 am and was trolling herring by 6. No one else was on the river, and I started wondering where the other boats were. Around 6:40 am, my mooching rig got hung up and I lost my bait, but I was lucky enough to free the rig without breaking off. I spent the next 5 minutes trying to get a fresh herring to do “the perfect roll” in the water. I had to re-rig it 3 or 4 times to get it right, but when I got it, it looked like a silver drill bit cutting through the river. I ripped off 35 pulls of line and set the rod into the holder, feeling satisfied. As I trolled downriver, I kept the 4 oz. cannonball bouncing off the bottom occasionally, carefully monitoring the depth finder to stay in 17' to 20' of water. The gps read exactly 3.0 mph, and I wondered if maybe I was moving a little too fast, but I noticed the “drill bit” herring didn't rotate as well when I threw out a drift sock to slow down, so I pulled the sock in and kept cruising along.

I came alongside a row of wood pilings where I had hooked (and lost) a springer two weeks ago. I thought about how that fish had charged right at the kayak when I hooked him, how I had thrown the boat into neutral too soon, and how the fish had leaped out of the water with a lot of slack in the line. I had only played the fish for about 30 seconds before losing it. I had a game plan not to let that happen again.

It was close to 7 am now, and about half a dozen other boats seemed to appear out of nowhere and worked the river ¼ mile above and below me. I was intently focused on the depth finder, watching the bottom, making minute adjustments with the tiller handle, keeping the herring right in the zone. I was so focused that I almost rammed the kayak into a piling head on. That's when the drag on my reel engaged as it started peeling off line, and I thought I was snagged on the bottom again. I put a hand on the gear shift, ready to throw the little motor into neutral, but the rod popped back up and then doubled over hard, with more line peeling off. When the rod popped back up again, then down hard with a series of twitches, I knew I had hooked into something nice. As the fish relaxed and the rod started to slowly rise again, I goosed the motor and pulled the fish hard for a few seconds before I let off the gas and pulled the rod out of the holder. This fish was not getting any slack...period.

I kept the kayak moving 3 mph downstream while I reeled down on the fish each time the rod seemed to straighten up. I made a few firm sweeps of the rod to set the hook harder, trying to drive it in deep. I didn't whip the rod fast, I just pulled back hard every now and then when I thought the fish might be resting. Each time I did it, the fish got mad and peeled off a few feet of line. By now I had moved the kayak into the middle of the river channel, 40' deep, away from any pilings or other nasty obstacles the fish could wrap around. After 5 minutes of dragging the fish under power and sweeping hook sets under constant tension, I felt I had a good hook set and decided to turn the kayak around and pull the fish upriver while reeling down on her hard. That's when she cut loose...with her face directly in the current, the fish went nuts and leaped out of the water 5 or 6 times over the course of the next 5 minutes. I would reel her to within 15 feet of the yak, then she would peel off 20 feet of line and leap out of the water. Each time she jumped, I kept thinking she would throw the hook. I tried to keep her calm, putting my rod tip under the water when she started making a run, but she wasn't having any of that, and she broke the surface on both sides of the boat and directly behind me.

By now the other boats had taken notice and I had an audience...finger pointing, people talking. A guy on a house boat walked onto his deck and grabbed a big net and offered help. I waved him away and told him I hadn't even figured out if the fish was hatchery or not. Pressure was on...losing the fish now would be a slap in the face with all these people watching.

The king finally tired out, and she couldn't make any more leaps to clear the water, but she continued to thrash at the surface. I was able to get her to within 6 feet of me! But I couldn't see if she was a hatchery or not. I kept looking for that little fatty fin, but she would roll around and kept diving straight down and bending the rod in half. She would just lay down there, and if I pumped the rod up, she would make a little run.

Another boat pulled along side me and offered to net the fish. I thought about it, but I already had the net in my hand. “Slow down your troll speed, the fish is rotating down there,” the boater said.

I could see he was right. I was barely moving upstream, less than 1 mph on the gps, but the king was helicoptering when I would reel against her, making it hard for me to make progress. I can only imagine how dizzy she must be getting. I put the motor in neutral and that solved the problem. I reeled her close enough to see she was a hatchery fish. Net in one hand and rod in the other, I scooped the net under her and struggled to get her to fit into the net. She thrashed and contorted her body and I had her tail in the net, but her head was out! I kept scooping her and somehow she wrapped herself in a goofy net blanket without being all the way in! I grabbed the bundle and clutched it closed with my fingers while I hauled her into the yak. By the time she cleared the side of the yak, she had fallen the rest of the way into the net. Relief! My first king! She weighed 13 lbs and measured 28 ½ inches. Thankfully she was a hatchery because I about beat her to death to get her in (20 minutes of fighting time, ridiculous). I'll use less motor next time to cut the landing time in half and reduce stress on the fish. But it was great to finally land one of these magnificent fish. A day to remember. Getting home by 9:30 am was a bonus.

Thanks to all the folks here at OFF who answer my continuous barrage of fishing questions! 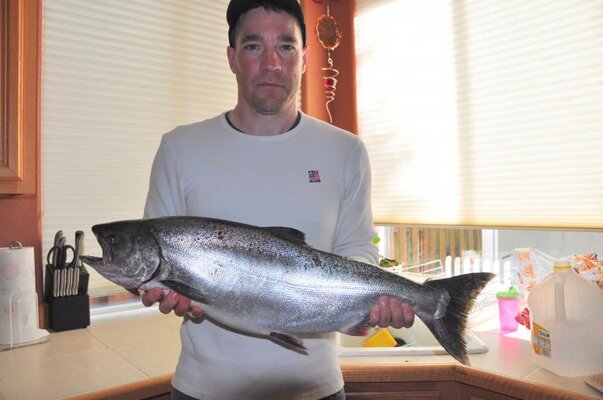 Aervax
That is a great story and one beautifully bright fish. Mighty good eating it will be. Congrats on the King!

C_Run
Nice story and congratulations. And the contrarian attitude towards bananas...interesting.

You were "lower" Willamette, right, or above the falls?

rogerdodger
excellent, hopefully the first of many chromers that will get blood in your boat, thanks for sharing...roger
E
eugene1
Awesome!!
S
sapo
Nice fish, delicious dinner!
T
Throbbit _Shane
Awesome report! Bet you got springer fever now!

bass
Fantastic fish and report!!! You really took us along for the ride with the telling of that adventure. Thanks for writing up such a great read.
C
CrappieCrazy
Sweet..!!!
M
minnowmagnet
That is a killer story. Thanks for the great write-up.
Congrats on your first springer! Sounds like you were very determined and its great when determination leads to big dividends. I am looking forward to seeing you out there again sometime.
G
Gettin' Jiggy Wid It

C_Run said:
Nice story and congratulations. And the contrarian attitude towards bananas...interesting.
Click to expand...

Thanks for the kind words everyone! I was fishing below the Falls, but now I see ODFW posting fish counts of more than 4700 springers having moved above the Falls, and more than 6,000 steelhead above the Falls as well. Maybe it's time to troll around up there before long. I wonder if steelhead ever get caught by springer fishermen trolling herring or anchovies? I've heard the springer fishing above the Falls is usually done with spinners instead of bait as the water warms above 58 degrees or so.
Last edited by a moderator: May 7, 2014
T
troutmasta
Great Report!!
B
Big3d
Amazingly epic tale! Amazingly epic fish! Dude, you just had an amazingly epic day!
M
mikeee2362
That's awesome brother!! Love the banana...might have to change my ways. Great story, thanks for sharing!!

NWDiscer
Great writeup congrats on the chrome!!
H
handmethewrench
kick a**!!!!
Last edited by a moderator: May 7, 2014
You must log in or register to reply here.

"MORE TO COME" My way of fishing