Went down to the Muddy River in Washington with some friends. Camped in the sites on a closed road, then went out early in the morning for some trout and whitefish fly fishing. First spot where clear creek converges with the Muddy was on fire in the morning. Plenty of whitefish and a few larger trout than last time (late summer). We were successful on orange egg flies, and a variety of prince sizes/variations.
We worked our way up stream, fishing deep pools. We were becoming less and less successful so we came back to the conversion and the big pool below it, as well as a few downstream, and the fish were on again. Caught approx 20 fish total (my friends first time, lots of fixing tangles, snags, break offs, and rigging).
One interesting catch was a salmon that was finished spawning. My indicator hesitated, then got pulled under due to current, so I set the hook, hoping it wasn’t a snag. What came up was this-a big rotting salmon that was still alive! 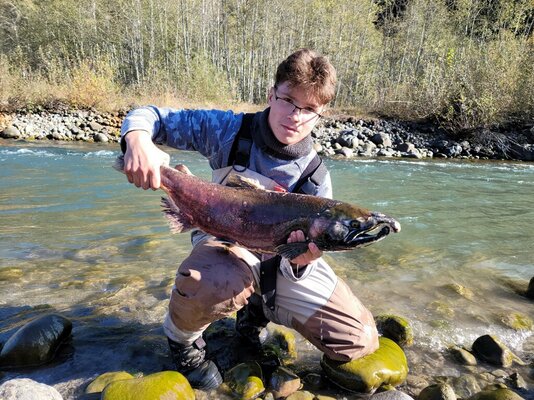 What kind of salmon is this? It resembled a sockeye or coho with its red body and greenish head. At first I thought it might be kokanee from the res, but it was clearly too big.

this river is a tributary of swift-yale-merwin reservoirs, and converges with the Lewis right before it enters the swift res. I read somewhere that coho were released into the swift res once.

In the end we kept a few fish, and their stomachs were packed with salmon eggs. Likely from whatever salmon run this is.

the fish were cleaned, scored, oil and seasoning rubbed in, then smoked for 30 min, then roasted over camp fire for a crispy skin. Very delicious. Whitefish didn’t smell bad like it does in the Deschutes, and it was sweeter than the one trout we kept. Trout was more tender.
F

That's gotta be the gnarliest, yet still alive, soreback ever. If it's gum line hasn't been ravaged, and changed color, with age...then I vote Coho.

P.S. "where clear creek converges with the Muddy" what an interesting conundrum. lol
You must log in or register to reply here.

F
I am done with people