How about a few more firsts!!

Y
youngbuck307
so Eggs and I went out for some Presidents day blood... We started off the day at 4:45am. After stopping for some redbulls we headed for the mighty nestucca! We were told there big boys were in and heading for up high in the river...

pulled out up high to start at a nice lil run and work are way back. It was some perfect looking drift water so evan though i hadn't hooked a fish drift fishing yet i busted out with my new (for me) drift rod and started hitting it.
we cover the run between the both of us pretty quick because wasn't very big when eggs asked if i wanted to move in anouther 5.... i say yea just want to hit the upper part of this.... i move up cast my lil dark pink corky out and, Tap.... Tap...... Tap.....Tap.Tap STOP.... I set the hook... think hey just anouther sna... befor the rest of the thought could cross my mind violent head shakes!!! and then the sound i hadnt heard in a while (part because i used only a baitcaster befor) the sound of a spinning reels drag screaming!! I tighten my drag a lil and start working this fish. until this point I have been able to put a spanking on most fish I got at the end of my line. This fish was just doing what it wanted when it wanted for the most part. All that I had to do was make sure the fish didn't run down stream. Up was fine but if it went down it would be in white water with no bank i could run down to give chase. I got the fish to come in close enough for us to get a look and see it was a native. so i really try to get it in kinda faster then. But this thing would just not give up. i would bring it in and off it would go... evan got a great jump out of him... after I started to feel a lil burn in the arm i got it up to the bank with the help of eggs....

He busted out with the phone to take a pic and I took the hook out and lifted him up for a nice lil pic for the camera. Then the min it got its nose back in the water i got a nice splash and off it went.

This was the only fish we could find all day. Got lucky to not have to work much for the first one but couldnt find what they wanted the rest of the day. 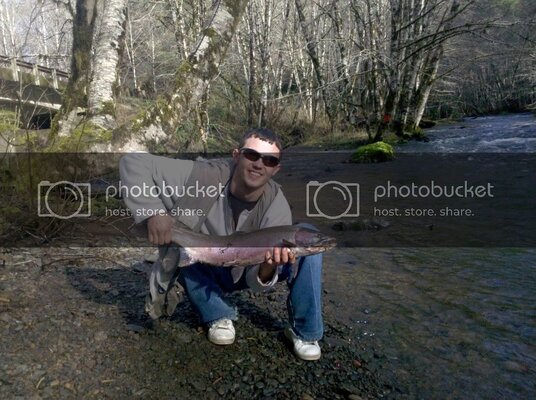 So the first i took care of today was, FIRST NATIVE STEELHEAD!:dance:FIRST FISH DRIFT FISHING!:dance:and BIGGEST FISH TO DATE :dance:

anyone got a idea on LBS? because i dont
T
Thuggin4Life
God job man. I still have only got one fish drifting. big snag tried to tighten the drag to break it after several jerks and finally the snag materialized into a 20lb nook almost didn't loosen the drag quick enough. great to break in a new rod. loks like the weather was good ovewr there as well.
S
steelhead_stalkers
I would guess 10+ lbs! Very nice fish. :clap:
Y
youngbuck307
Thanks guys the nates really fight harder than the 4-6lb cookie cutters I normaly get! I may have evan found a new favorite river i think
J
joni
nice work

u must of been high that looks like pretty small water, i haven't ventured past first bridge yet
congrats on hooking into some native steel power!
C
Cohosanders
Great story Buck:clap: I have caught about 6 drifting and 3 on bobber this season. I need to venture out to some new water. Let's hit it this Sunday.

That smile says it all! Congrats on all the 'firsts'! :clap: :clap:
C
Cohosanders
x
B
bigsteel
nice catch,,,,i know right where u were in that pic...very productive
O
OnTheDrop
gotta love how high you are up there. . And i'd say between 10-12lbs..
Y
youngbuck307
joni yea dont know how many miles up out of beaver we were but quite a few lets just say were up there by the campgrounds.

Thanks bigsteel sorry you couldnt join us. But like i said me and eggs both love that river so sure we will be back!
B
bigsteel
im down to go this week,,,i sent ya a pm
M
mgdguy
That's a nice lookin fish! :clap: :clap:

Congrats on the success. That one fish is one more than we got into on the Sandy yesterday
E
eggs
That was a fun trip, awesome river! Wish we could have gotten into more. We found some very fishy spots and was suprised we didn't get into more.

That was such a nice fish! I was just hoping for no fin during the fight!

I would be down for another trip this weekend over there!
S
Steelheader4Life

youngbuck307 said:
joni yea dont know how many miles up out of beaver we were but quite a few lets just say were up there by the campgrounds.

Thanks bigsteel sorry you couldnt join us. But like i said me and eggs both love that river so sure we will be back!
Click to expand...


Nice fish youngbuck. You're right at the deadline at Elk Creek. 95% of the fish above Blaine are natives. I think it is one of the best coastal rivers, but that's just an opinion. I landed a 14 lb hen and about a 9-10 lb hen this weekend, both up high. 20 lb fish are not uncommon, there just really hard to land!! Good luck on your next trip!!
B
bigdog
Good job Tom congrats bro.
J
joni
where is the dead line for bait on this river
Last edited: Feb 16, 2010
E
eggs
Elk creek is deadline... looks like a Saturday trip might be in order.. pm me if interested..
J
joni

I meant the dead line for bait not for fishing
i looked it up moon creek on up is artificial flies and lures only
T
troutmasta
SWEET! this corkie stuff is a kick in the *** huh?
You must log in or register to reply here.

R
First year on my own