bass
I hit the Willamette out of Swan Island for sturgeon on Sunday, October 25th. It was my first trip out for sturgeon this fall and my hopes were high. I met up with friend who I had not fished with in years so it was already a special day.

We saw scattered fish as we made our way through the harbor. They looked huge on the side imaging (judging by my speed and the size of the marks) but they were all kind of isolated. One here and one there.

We made it out to the first dry dock and there were a ton of fish kegged up as expected. We both normally prefer not to fish close to the dry docks and usually do so only if we can't find biters anywhere else. However this being our first trip we figured "hey, lets get the skunk off and then move on".

Narrator's voice: "They did not get the skunk off"

We fished there for about 15 minutes with only line rubs to show for it - unless you count the old rusted light fixture I reeled up. However, the light fixture was not clipped so I had to throw it back

We then headed out to the edge of the harbor and fished for a bit. My friend got his skunk off with a shaker but all I got was a bait stripped to the bones by some type of nuisance fish.

We then spent a fair bit of time zig-zagging our way down to the RR bridge looking for signs of life. We marked plenty of small fish (pikieminnows?) but nothing that looked sturgeon-like.

We then zig-zagged back to the harbor on a different path but once again could not find any main river fish. Out near the mouth of the harbor we marked some small groups of what appeared to be sturgeon but we could not buy a bite. We stopped at a few different places but we never found any biters out at the mouth.

We then headed back and decided that we might as well fish the dry docks, at least for a bit. I stayed well out near towards the mouth and my friend went in close. I was marking a decent amount of scattered fish and he said they were kegged up as usual right next to the dry dock.

Almost immediately we both hooked up. The water temp was 57 and at that temp those sturgeon are crazy! We both had really hard battles and in the end we both were able to subdue our fish. Mine was around the 4' mark and my friends was around 6'. 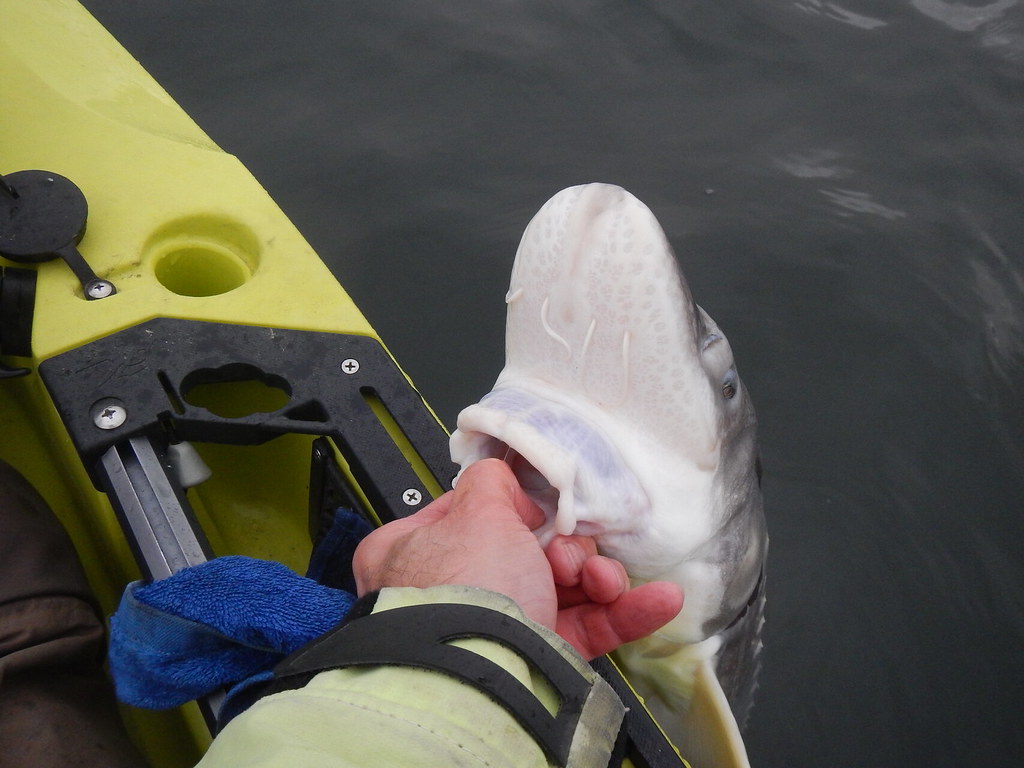 While he was fighting his fish one of the dock workers told him he should not be so close to the dry docks (like you have a choice where you are going when a 6' sturgeon is pulling you around in a kayak). Once of the main reasons I hate fishing near the dry docks is that there is so many places for a fish to hang you up. I find it a lot more relaxing and fun to fight fish out in more open water.

After getting yelled out my friend moved further out (closer to where I was). About that time other kayakers came into that little harbor. Some of them went and fished near where the fish were kegged up and they all fished way further in than my friend or I.

I did see the security guy call over the one kayaker and say something to him (no idea what) but they went right back to fishing. I think legally you can fish there but I try not to rock the boat.

Anyway, within a short while I hooked up again and landed another nice one after another spirited battle. 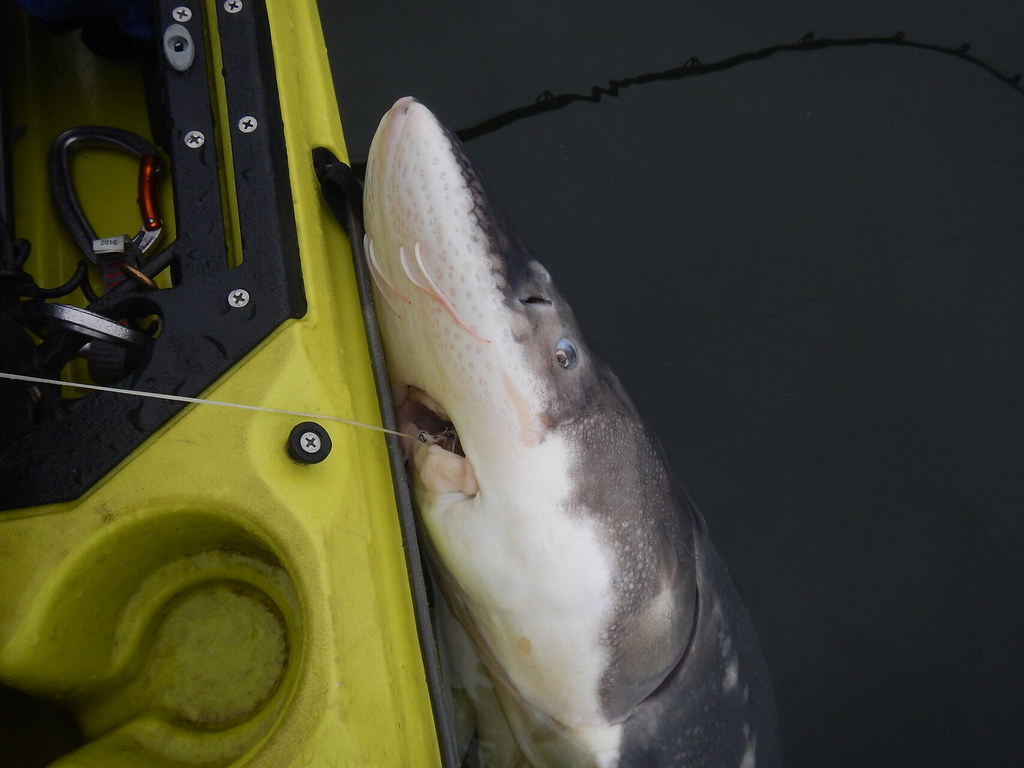 My friend decided at that point to fish his way back to the dock as he had been out salmon trolling the day before and was pretty whipped. The funny thing was that every once in a while I would call him on the radio to say hey and see how he was doing. Each time as soon as we started talking I would get a bite! Eventually I started calling him and saying that I wanted to get a bite so I was calling him

I caught fish steadily all day long. Never red hot, never ice cold. It was just a nice fun day of relaxing sturgeon fishing. There were enough fish out where I fished to keep it fun and each battle was a crazy tug of war. 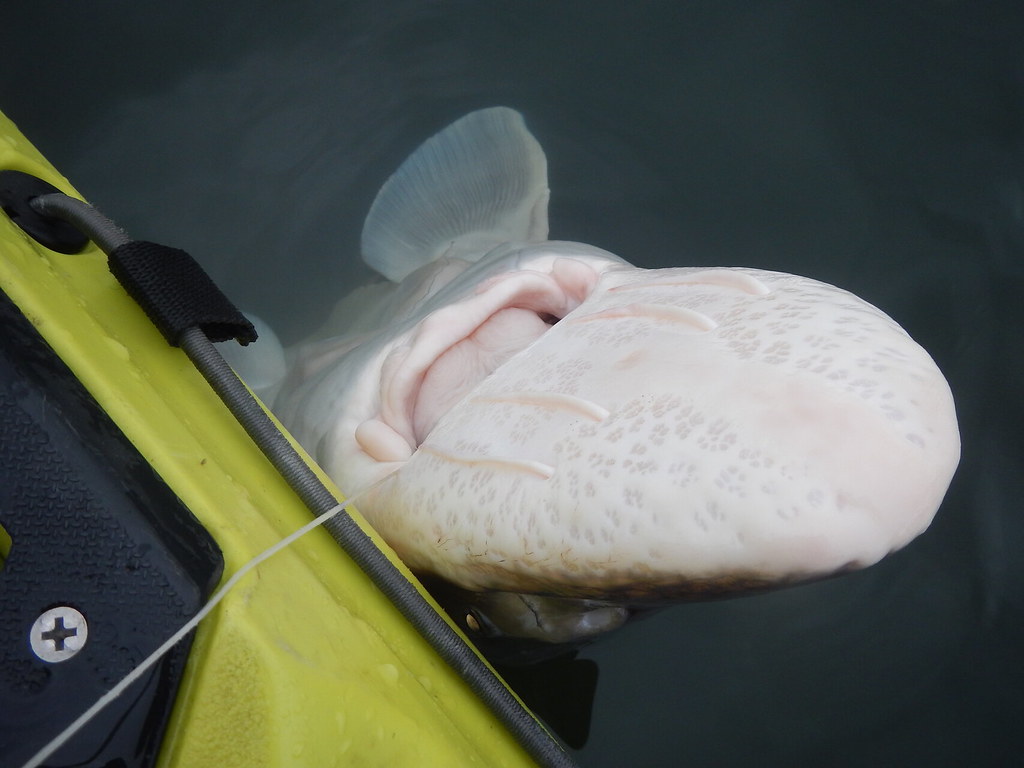 Here is my biggest fish (probably about a 5' fish). 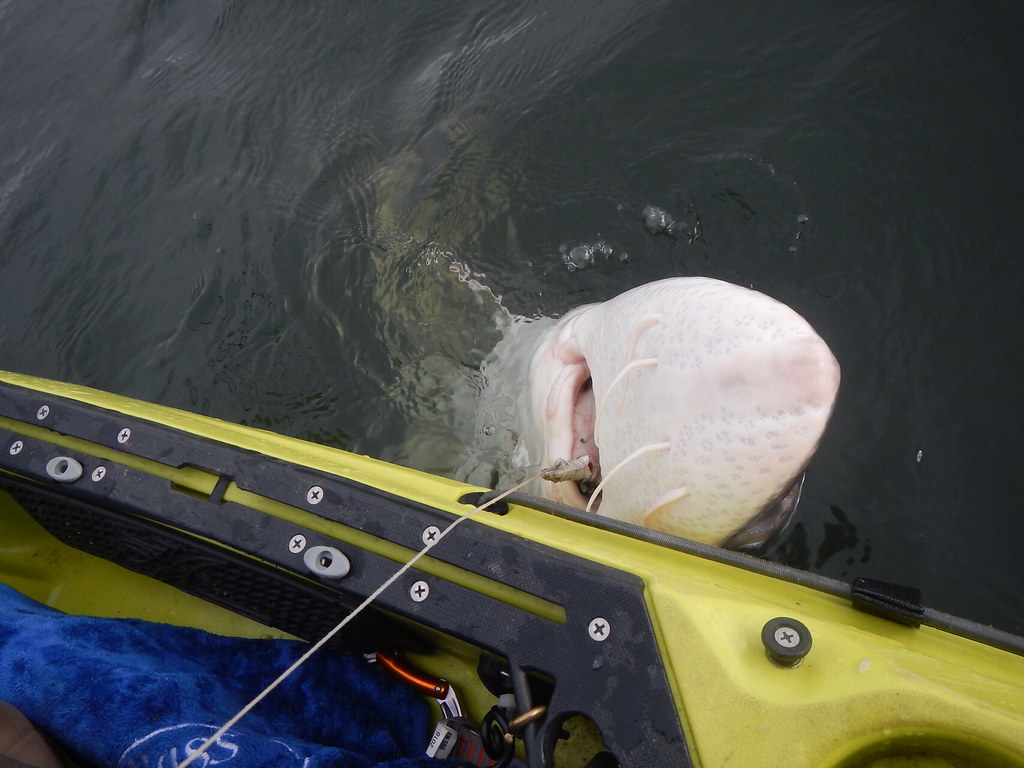 By now you must be wondering what is up with the title. Well, during the course of the day I had 3 sturgeon leap completely out of the water in crazy twisting jumps. I got a good video of only the last and smallest. The others are just off camera but you can see and hear the splashes.

Here is a frame grab from the video: 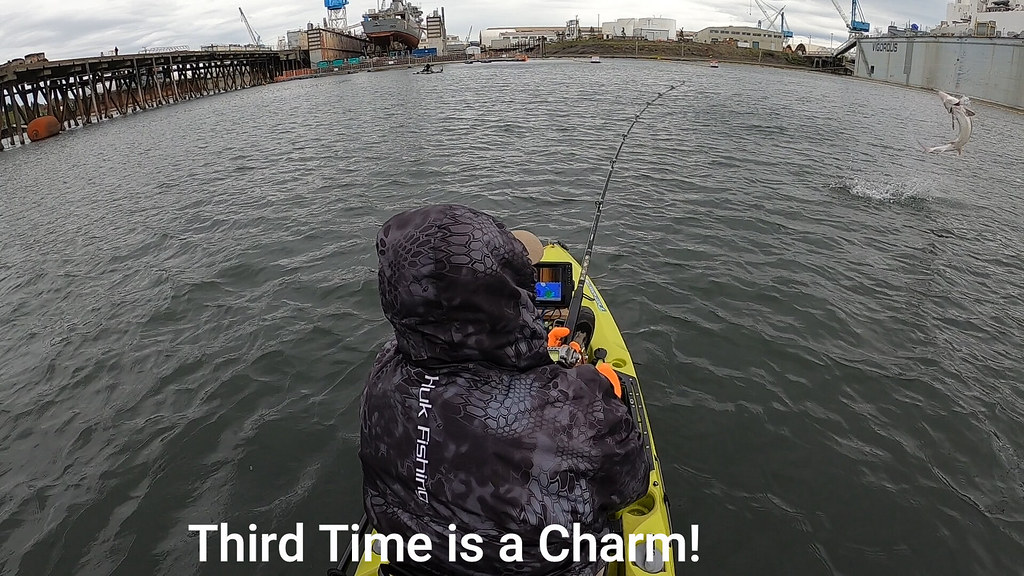 Here is some video from the day (including good footage of the jumper I caught on film). Overall if you want to fish tight to the dry docks the bite is really hot. If you'd rather fish out a bit the bite is still good. I ended up with a dozen for the day (full day) which was enough for me.

Last edited by a moderator: Nov 1, 2020
G
Gulfstream
Great report as usual! I am ready!
You must log in or register to reply here.