Fishing out of Newberg, a Father's Day story

bass
For Father's day my family suggested, no begged, well actually demanded that I go fishing. In retrospect that seems a little off, but hey fishing

I got to Newberg around 5:20am and I was on the water by 5:45am (I am a terribly slow launcher since I do bring most of the Bass Pro Shops catalog with me each time out). I got on the water and started tossing a whopper plopper knockoff. It was serene and calming listening to the plop,, plop plop and watching the lure makes it way back. After ten minutes of that I remembered I was there to catch fish and not feel alone in the universe.

I don't know this area very well, I have fished it a handful of times for sturgeon in the winter and early spring, and I have only explored and/or fished for bass around some sturgeon spots. So, I was throwing a lure that might be unproductive or just be fishing an unproductive spot. I am sure every fisherman has felt that angst. It really looked like topwater morning but so be it.

As I moved downstream I came upon a big rock shelf. I never realized how bit it was. I threw a few active baits (crankbait, spinnerbait, swimbait) over the top of it without a sniff. I was trying to decide what to do when I was visited from beings from above: 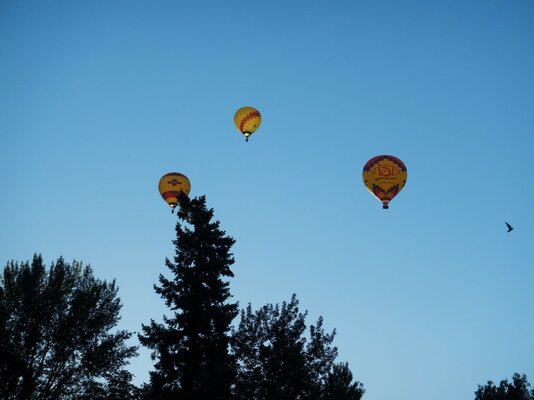 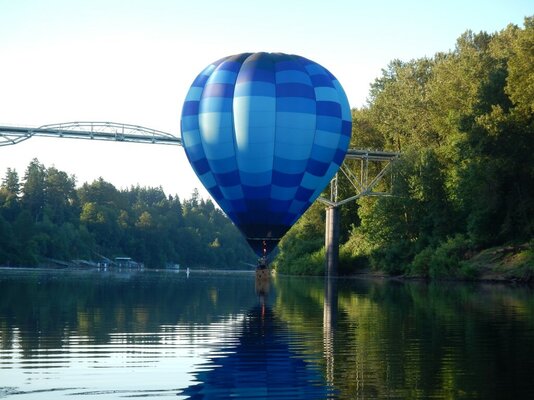 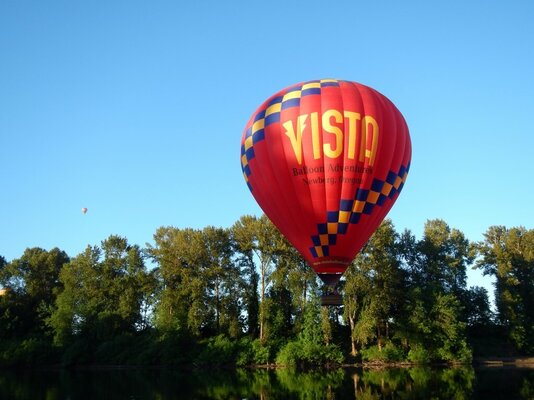 That was amazingly cool. When they came down the roar from their fires was impressive. Apparently they were there to wake up the fish. After they left I moved to the downstream side of the shelf where it dropped from about 5' into about 30' almost straight down. I decided this called for a Ned rig. I missed fish on my first couple of casts when BAM, success. 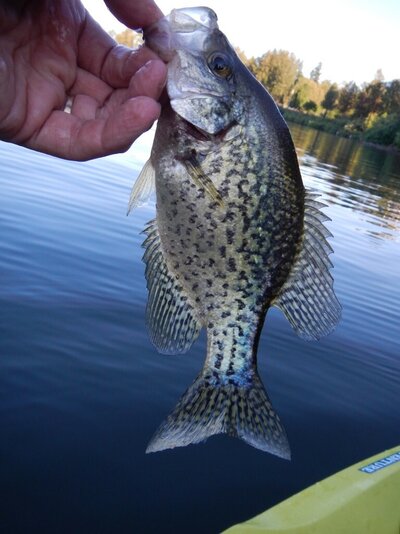 Not exactly what I was looking for, but it was still pretty cool. I picked up another 1/2 dozen or so of about the same size when I decided that was not was I looking for -especially with the sun getting close to rising over the hill tops.

I kept moving downstream away from the crappie looking for smallmouth. Near the bridge the water was running pretty swiftly and it looked pretty bassy to me. I tossed out a swimbait and on the second cast I had a huge hit! Oh yeah baby it is on!! 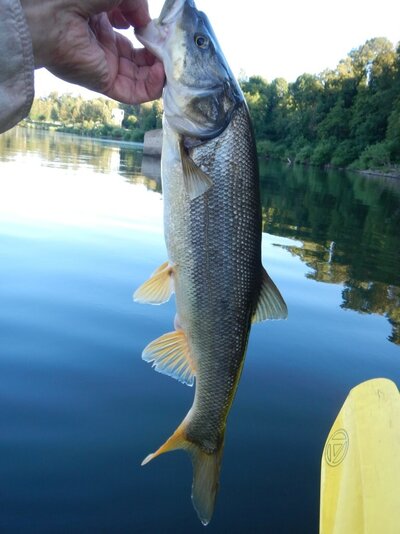 I plan on making an appointment with the optometrist soon because clearly my ability to see bass water is being screwed up by my glasses I said to myself, not whatI was looking for but a lot bigger than a crappie. I missed a few more hits on the swimbait so I decided to switch to a squarebill crankbait. On my first cast, BAM, another hard hit and this thing was really pulling in the current. 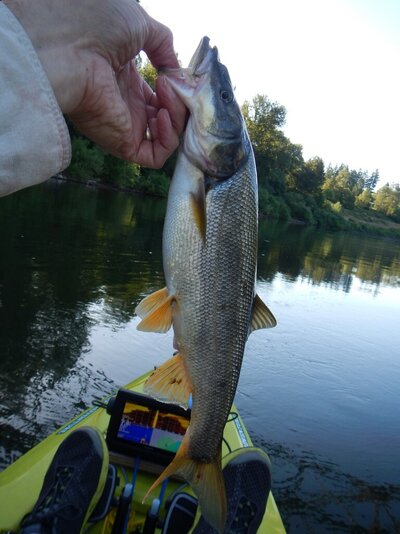 You have go to be kidding me. I decided that perhaps the water at the bridge was running too fast and that I needed a little slower water for bass. So, I continued my journey downstream. Alternating a swimbait, crankbait and a spinnerbait. I just could not catch a fish on any of those 3. The sun was now over the treetops and I was bassless and a little stunned to be sure.

I decided to put away my "fun to fish with" lures and picked up my spinning rod with a Ned rig. I moved to a steep bank and tossed it out. On the first cast a fish picked it up and the frustration and tension of the morning came to a boil as I set to the hook with a little too much oomph and snapped the 8lb leader on hookset. I am not going to lie, I was not a happy camper at that point. The sky was pure blue but I felt a dark cloud looming over me.

I took a deep breath and re-tied a new leader and tied on a new Ned rig. On the third cast I set the hook, firmly but not like a maniac, and voila I finally caught what I had came for. It had taken nearly 3 hours but I felt all the tension drain from my body. 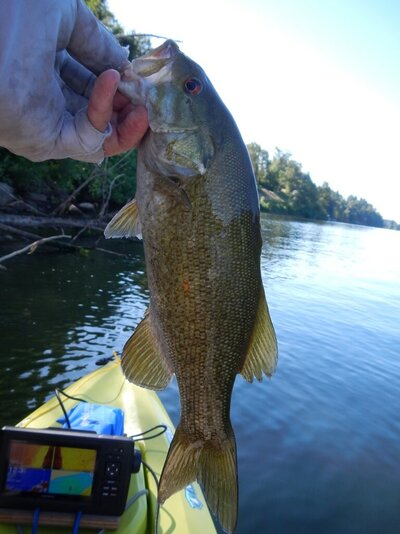 Sad to say that this fish was about as good of a bass as I caught all day. I ended up catching 16 bass (15 smallmouth and 1 largemouth) but the best of them were 1.25 to 1.5 lbs and there were others that made those look big. The Ned rig really produced well for me. This time I was throwing green pumpkin, I am not sure if color matters, but that is what I was tossing. While I was working my way down one steep bank I had a visitor. 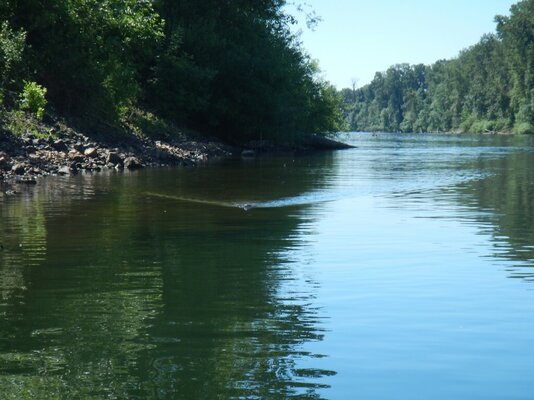 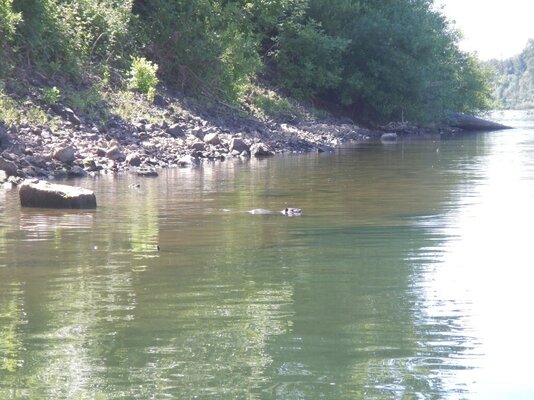 Really cool and odd to see a beaver out that late in the day. I can only assume it came to see the balloons but overslept.

I just slowly worked my way down the bank picking up fish here and there. If there was any kind of shoal, or point I would catch a fish or two. It was nice steady fishing. I was catching most of the fish in 10-20' of water. I tried fishing deeper for a while but only managed to snag up twice. By the time it was early afternoon I decided to get some exercise and pedal up around Ash Island and do some fishing up that way. By that time I had 14 bass. As I made way up the side channel along Ash I tossed a Carolina rig with a short leader around all the wood. I picked up two more bass doing this and lost a couple more. That was it for the day, but it ended on another cool nature note: 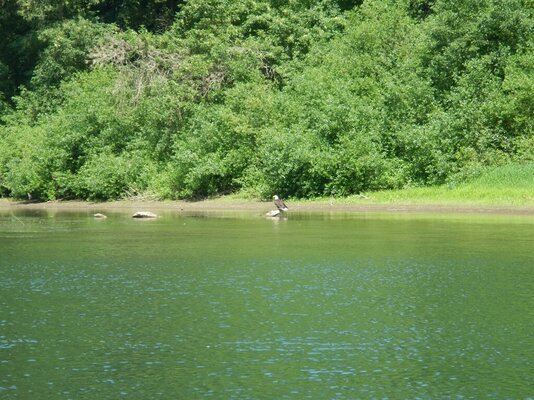 A bald eagle scavenging what was probably a carp carcass on the shore's edge.

I did not catch a ton of bass, I did not catch a big bass, but I was still light-hearted as I pedaled back to the ramp. I thought back on the day and felt good that I had stuck it out and scratched out a decent number of fish, especially given that I had completely blown the best part of the day. You have to focus on the positives and learn from the negatives. I think I understand that area better now and I know I can do better in the future. It is like making a par on your last hole of golf when you made a ten on every single one before that. You have to ride the positives!

When I got home, my son made me dinner, my daughter made me dessert and my wife poured me some wine. At the end I could not have wished for a better father's day.

Golfbum
Great report, thanks for sharing.

bass
Thanks Golfbum, I figured you could relate to the golf analogy

troutdude
Sure do enjoy reading about your escapades. Your writing style often reminds me of the musings, of Pat McManus. Sans Retch Sweeney.

bass
Thanks TD, that made me smile. I love Patrick McManus. One of the best parts of getting Outdoor Life was turning to the back page to read his story that month. I think I have all of his books and have read them to bits.
You must log in or register to reply here.