I hit the upper Willamette out of West Linn on Saturday. The forecast for the day was for gorgeous weather and for once the forecasters were telling the truth (they like to do that every now and again to throw you off).

I launched around daybreak and the water temp was 47.5F and visibility was about 1-2'. I did not have high expectations since the cold rain earlier in the week had cooled the river temp down by a degree or so. I was expectiong that the slight cooling would put the bass off their feed.

Thus, my mindset was that I did not have high hopes for catching fish but instead to just focus on being out on the on a nice day. The first spot I fished produced a single hit on a crankbait. That one stupid hit kept me on that spot way too long. I figured there had to be a bunch of bass around if I got one bite, but that was not the case.

I really still had no idea at this point if the bass were in deeper water in more of a winter pattern or if they were on the flats trying to fatten up for the spawn. I went back and forth between deeper water and shallower water, making a couple of casts deep and a couple of casts shallow. Eventually I lucked into my first smallmouth of the year on a Ned rig. I say lucked into because that was the only fish I caught that way all day long.

After more fruitless searching I pulled onto a point/flat that is usually a good producer for much of the year. I fished it with a handful of baits without getting any action when I decided to try to switch out my jerkbait for a swimbait because the guy I was fishing with had caught a smallmouth and a pikieminnow on an Alabama rig populated with swimbaits. I did not want to go full A-rig but I knew I could quickly throw on a single swimbait and get to fishing.

I had never really used that little swimbait much in the early season even though it is probably my top produce of the course of the entire year. I am not sure I would have tried it at all without my friend's success, but I have to say that I am really glad that he showed me the light. Within a few casts I caught a 1lb 11oz smallmouth on the point that already fished with numerous baits. Not a monster but definitely a respectable fish for the Willamette. The other part that was sweet is that I caught it on a new rod and reel! Always nice to get that first fish on a new rod and reel and remove any curse that may have been picked up in shipping

When I went to take a picture of that fish my camera gave me an "out of memory" error. It took me a moment to realize that my SD card was at home safe and secure inside my laptop. Doh! Fortunately I had my gopro with me and so I spent the day holding fish up to it to try and get some still shots.

Now the action was never fast and furious but I was able to scratch out a total of 9 smallmouth and 5 pikieminnows. The cool thing is that the smallmouth were all between 1lb 7oz and 2lb 15oz. No dinks all day long. I don't think the small fish have moved up yet (certainly not complaining). The crazy thing was the size of the pikieminnows. I caught a 3lb 10oz, a 4lb and a 4lb 3oz pikieminnow. Those are the 3 biggest pikieminnows I have every caught from that stretch. I know a lot folks hate on pikieminnows but I still think they are a pretty cool native fish and they fought really hard in that cool water. I could not tell if I had a bass or a pikieminnow on until I could see them.

Every fish (bass or pikieminnow) I caught was in 6-10' of water. I caught 1 on the Ned rig, 10 on the swimbait and 3 on a Rapala DT6 (in Disco shad). The biggest bass and the biggest pikieminnow both came on the DT6. Now, to be fair, I did not not spend much time outside of the 6-10' range so it makes sense that is where I caught my fish.

An interesting point is that most of the fish (all but the first two) came from one of 2 smallish areas. I am not sure if that is because I fished them so hard after catching a fish at each one or if they fish were just bunched up on those spots.

The one good spot was just a small part of a huge flat that did not seem any different than anywhere else around it. I am not sure why that particular section seemed to be so loaded up. The other spot was a small, isolated hump. I did spend time on other parts of that big flat, on a couple of other big flats and on several other small, isolated humps but all of those other similar looking spots seemed devoid of fish.

Here is a picture of my 2lb 15oz bass and of my 4lb 3oz pikieminnow. Sorry you have to click on these to see them. Flickr used to embed the photos. I will need to figure out a better way to post pics in the future. 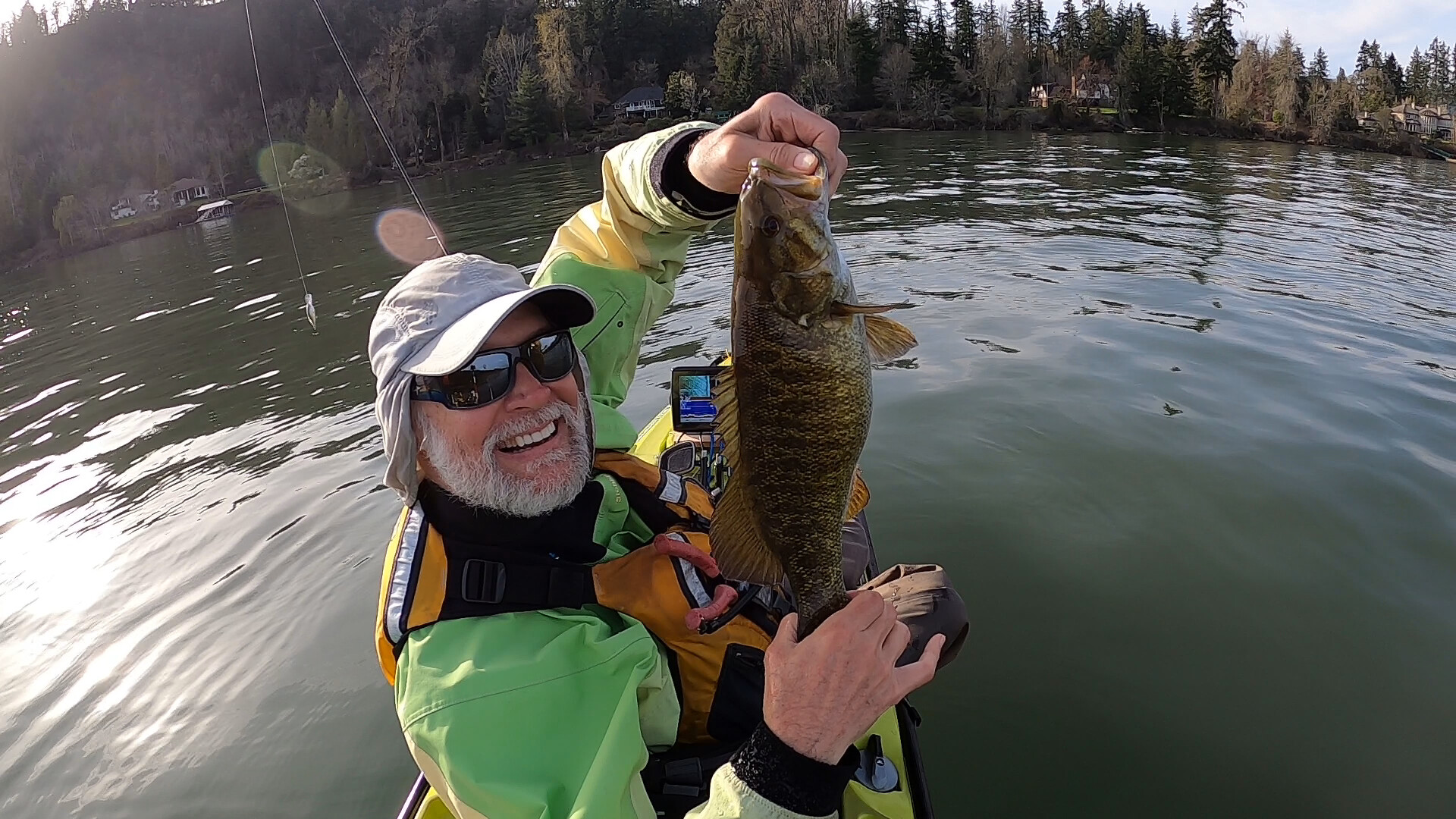 jstonick has shared 1 photo with you! 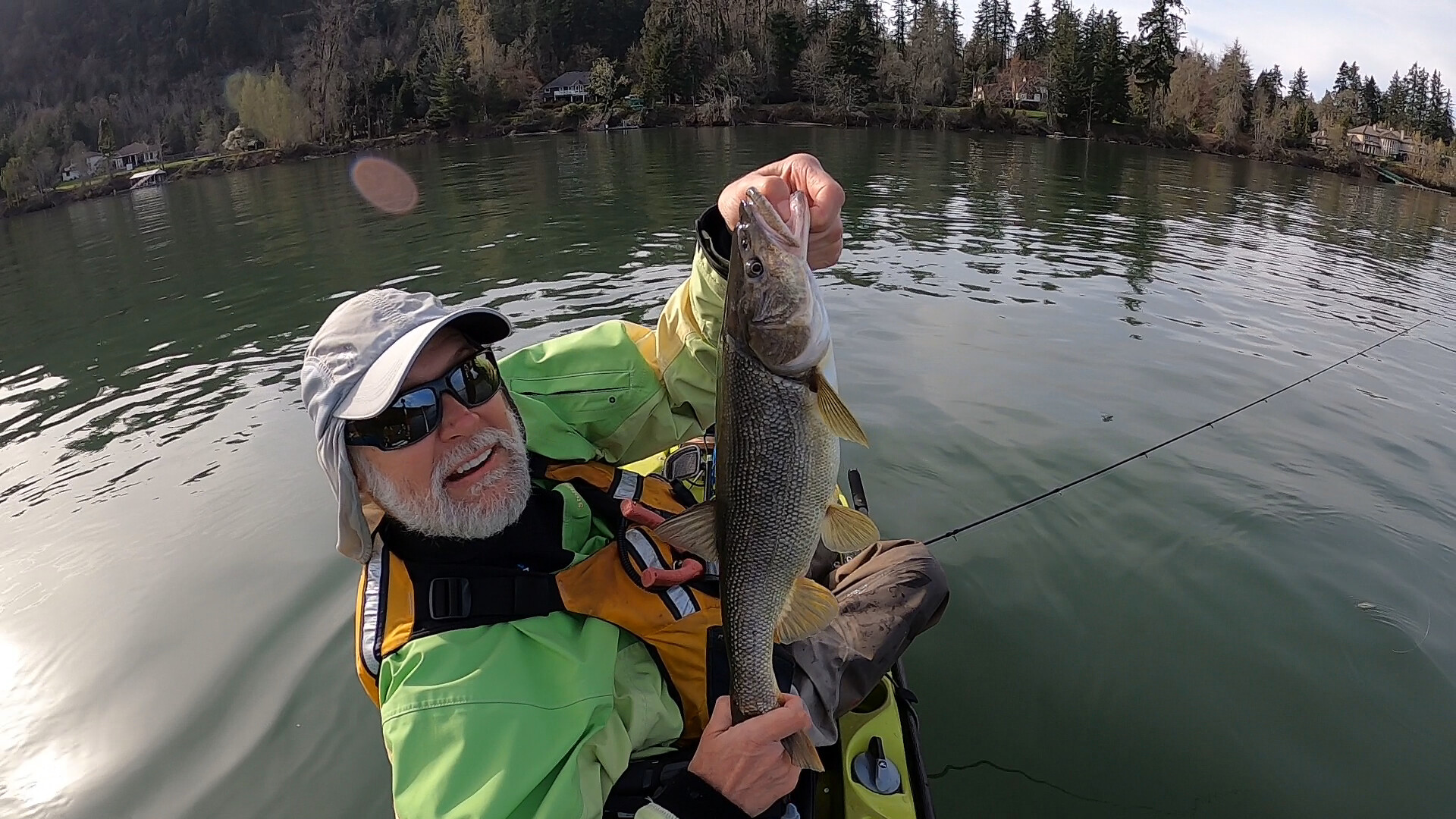 jstonick has shared 1 photo with you!

Here is some video from the day.


So, in summary, I went out with low expectations but came back with a decent day of catching and even got a little sunburn on my face and hands (even though I wore my sun gaiter for much of the day). Hard to do better than that in March in Oregon!

Dang brother! That pikeminnow is so big I thought it was a walleye!

Fun day in the water, good catch with the swimbait.

I won't throw an a-rig here, but a single 3" keitech can do some serious damage

Or an original storm wildeye shad, the hair-jig of the 21st century

Thanks @NKlamerus ! That biggest pikieminnow took off crazy hard and fast when it hit. I thought for sure that was a monster smallmouth.

I know that Keitech are the golden standard of swimbaits but I use the Bass Pro Shops Speed Shad. The are much cheaper, very tough (similar to Zman Elaztech) and work well. The swimbait I was fishing was still on the jighead from last year, I caught 9 fish on it on Saturday, and it is still in good enough shape for my next trip. I usually catch somewhere between 5 and 20 fish before I have to replace one.

I like the durability from a cost perspective and from a not wasting time re-rigging perspective. Plus, I can get the Speed Shad at the Cabela's in Tualatin. I think they are even on sale right now.
You must log in or register to reply here.