B
BaldTexan
I moved to Oregon this year from the south and set a goal for the year to catch a Chinook, a Coho, a Steelhead, and a sturgeon. I spent the summer exploring the state, rivers, and lakes. Did a lot of trout fishing this summer and then spent August up until now fishing for salmon. Chinook and Coho scratched off the list. Steelhead and sturgeon still to go.

With the weather forecast for Tillamook Bay looking uninviting this weekend I decided it was time to try catch a sturgeon. Read some forum info and did a little research and decided the easiest and clsest place would be the dock at West Linn. So I go fishing for sturgeon for the first time Saturday. Wasn’t in the water 5 minutes and hooked a behemoth! Wow! Cool! Fought it for 20 minutes then the fish decided it was tired of me pulling on him and it took off like it was on a mission and started smoking the drag and then popped off. Reeled in my rigging and it had straightened out a 7/0 hook! Geez. Hooked another. Same thing. Hooked another. This time my line popped. Dang. This is harder than I thought.

A guy just down the dock hooks a large fish. After about a 30 minute tug of war he gets it to the dock. 9 footer! WOW!

I was determined to get one all the way to the dock. I only have one hook left. Hook into another large sturgeon. Fight for about 10 minutes and it wraps my line around a snag. Dang! My last hook. I mess with it, shake it, give it slack, tug and shake. No luck. Break it off. Dig out one of the straightened out hook and plier it back into shape. Gonna hafta do. Cast out and about the time I get my line tight and think I’m gonna have a sit, fish on. This time it’s a shaker. Finally. Got one to the dock and get to keep my hook!

Caught a couple more in the “keeper slot” size and then hook another good size fish. Here we go again. Fight it for a few minutes and it wraps the line around a snag. Same drill. Shake it, tug it, give it slack. Nothing. Still hung up. It’s my last hook so I’m a little more patience. Work it tight, slack, tight slack. I could still feel the fish tugging every now and then. Work it some more and then finally and swims back upstream against the pressure and frees the snag! Sweet! The biggest one I managed to get to the dock. I’m guessing it was between 5’ to 6’ foot. Leader in one hand and couldn’t reach the tail with the other hand to get a pic of the whole fish.

What a blast. Fun and very exhausting. I will definitely do that again!...as soon as I rebuild the drag. Those beasts are hard on equipment! Cooked the drag on my Ambassadeur 7000! I'm REALLY loving all the fishing opportunities and varieties of great fish in the Northwest! Sturgeon scratched off the list. 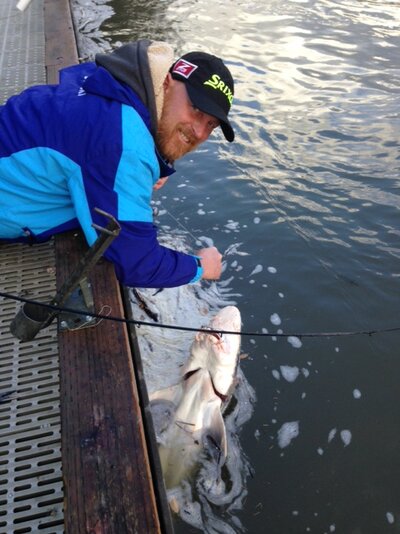 Raincatcher
Great report! My arms are tired, felt like I was right there with you! :thumb: Thanks for sharing your adventure with us.
E
eugene1
Cool!

Congrats on the sturgeon.
B
billfisher
First time sturgeon fishing! WOW! We're going to be hearing a lot from you. Good Job!
B
BaldTexan
Thanks. I was shocked when I hooked the first one. Felt like I snagged a school bus!
Can't imagine any other fish more fun to catch than that sitting on a dock. Those big guys are stacked below Willamette Falls like cord wood! The dock at West Linn even has rod holders. Pretty cool.

I was pretty pooped when I went home....but I'll do it again soon with a lot stronger gear and stronger hooks for sure! I want to get one of those beasts to the dock!

I fished out of Swan Island on Saturday and the fishing was kind of luke warm. I will write up a report later, but it was not as good as what you had going on for sure.

By the way, do you see any fur bags up there? One thing I like about fishing at Swan island is that there are never many sea lions around even when the salmon are running. I hate fishing around those things in my kayak.
B
BaldTexan

By the way, do you see any fur bags up there?
Click to expand...

haha. I can imagine! I didn't see any fur-bags Saturday but one of the fellows I was chatting with said he sees them there occasionally....and when I say the fish are stacked in there, they are literally stacked in there. If you're there more than 5 minutes you'll see one breach and you'll see an oversize or two breach the water pretty regularly.

I caught some on squid and also on herring, however with the herring, you also have to put up with the pike minnows (I assume) tearing up your bait. They didn't seem to bother the squid and the squid is tough enough to survive the shakers. I caught a shaker and a couple of 4 footers on the same squid before it was too mangled. Just kept tieing it back together! LOL. It was my last squid. Once the squid was gone I used some very old brined herring that i had thawed and re-frozen at least a dozen times since the first of August. Stinky stuff.
M
montym
Someone is sure having a great time in Oregon. Great post, really enjoyed it.

What kind of gear were you using?
B
BaldTexan

montym said:
Someone is sure having a great time in Oregon. Great post, really enjoyed it.

What kind of gear were you using?
Click to expand...

Lol. Yes I am! Been all over like a kid in a candy store!

i had broken the rod about a foot from the tip right after I had bought it. I spliced it back together and showed it to a custom rod builder. He told me it would break on the first chinook I set the hook on. Pppffftt! Since then I've caught a couple dozen large salmon on it, trolled in the ocean with it, caught AND landed a sea gull, and now hooked and briefly fought a few big ol' Dino fishes. I think it's a good repair! Lol

BaldTexan said:
haha. I can imagine! I didn't see any fur-bags Saturday but one of the fellows I was chatting with said he sees them there occasionally....and when I say the fish are stacked in there, they are literally stacked in there. If you're there more than 5 minutes you'll see one breach and you'll see an oversize or two breach the water pretty regularly.
Click to expand...

Thanks for the information. When I fish up that way I sometimes see them. Always makes for a bit of a nervous day. Some years seem worse than others, hopefully this year will not be too bad.
B
BaldTexan

bass said:
Thanks for the information. When I fish up that way I sometimes see them. Always makes for a bit of a nervous day. Some years seem worse than others, hopefully this year will not be too bad.
Click to expand...

Well I'm not much of a source having just gone and caught my first Dino fishes but I'll probably give it another go sometime this coming weekend. You have a lot bigger cajones than I to be out there floating in a kayak with those beast breaching out there! Then if some big fur bags show up? Not for me! Lol.

I'd take the boat out there but I have absolutely zero River boating experience having spent my years fishing on lakes in the south and that looks like pretty strong current!
You must log in or register to reply here.

D
Heading to Detroit lake, first time from the dam!