Close, but not quite close enough...

C
ChezJfrey
Well, well...I actually lured a steelhead out of its holding spot yesterday; this was the first time I've actually seen one that was interested in what I had to offer.

Was reeling in a brass spinner and about 4 feet from me, saw a steelhead chasing it, but when it got within about 3 feet of the bank, did an about-face and retreated. Had a pretty good idea where it was hiding out, so I tried a couple more casts, switched to a drift rig, then a different spinner entirely, but I guess it spooked or moved on.

I'll credit Damon for getting me to actually look in the kind of spot I found this one...before, I would have likely passed by the type of water as being way too fast/choppy, but those big fish can find all kinds of cover in there.

And of course, obligatory trout...I'll credit Damon for that too...I went from 0 to now having caught literally dozens of stream trout (only lake stockers before) after going out with that guy...perhaps I learned the wrong lessons? LOL! 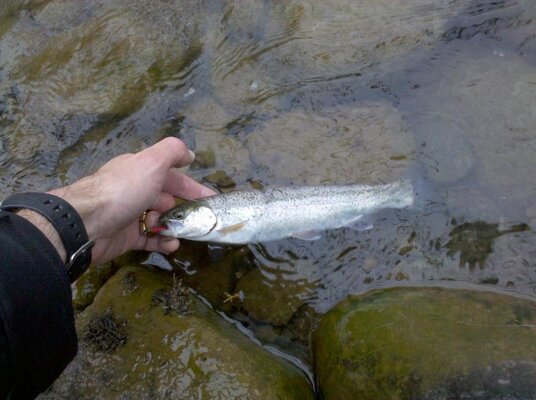 P.S. That bottom one was really stout for its length and apparently quite agressive; thing struck the spinner the second it hit the water, like it had ESP or something and just 'knew' something was gonna drop from the sky to chomp!
Last edited: May 22, 2011
K
Kevinb5688
i fished 3 days with spinners and didn't get one fish, then a very experienced guy came down to my spot and caught 3 fish in 30 minutes on the same type of lure. i asked what i was doing wrong and he told me his trick. i then caught one or two the next 5 outings. casting straight up stream in 1-3 foot of water barely reeling and letting a size 4 or 5 blue fox clink on the rocks. works amazing!!! heres some of my fish 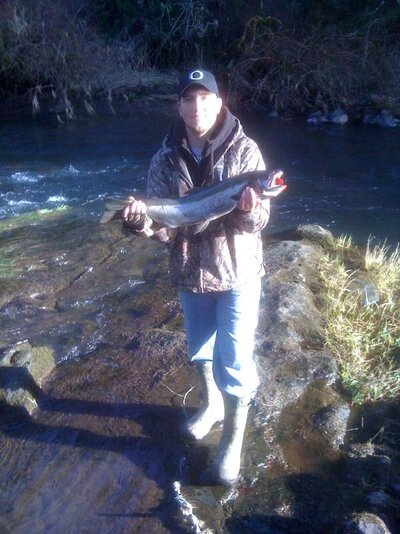 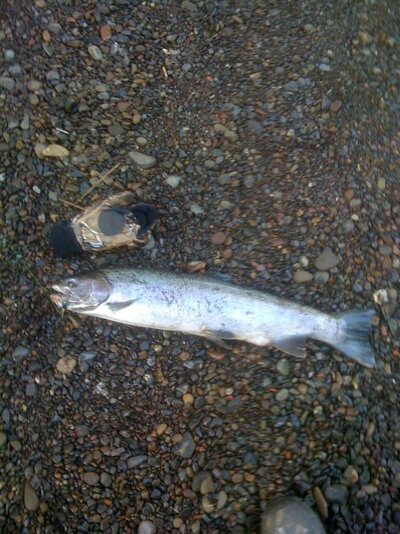 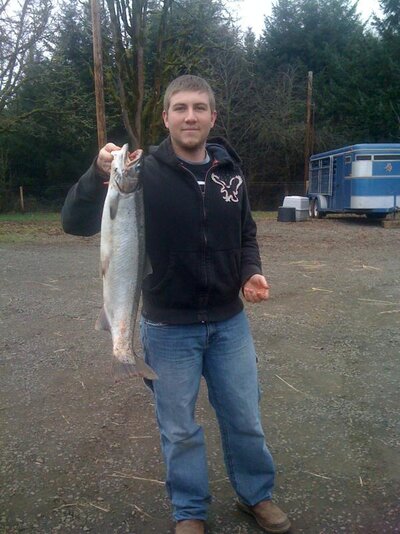 Kevinb5688 said:
casting straight up stream in 1-3 foot of water barely reeling and letting a size 4 or 5 blue fox clink on the rocks. works amazing!!! heres some of my fish
Click to expand...

I was using a different spinner than a Blue Fox, but what you describe is the exact method that got this fish moving toward my lure.

The funny thing is, that most of the trout I catch are when it gets downstream during this method and they hit it on the swing.
Last edited: May 22, 2011
K
Kevinb5688
I use size 5 so a trout wont hit it.
C
ChezJfrey


Yeah, I've been debating this size thing. I've been trying to stick with the Jed Davis size suggestions based on water temp/clarity/sunlight, so have found myself using size 3/4 in lighter/warmer conditions.
B
beaverfan

ChezJfrey said:
Yeah, I've been debating this size thing. I've been trying to stick with the Jed Davis size suggestions based on water temp/clarity/sunlight, so have found myself using size 3/4 in lighter/warmer conditions.
Click to expand...


I have been fishing spinners quite a while and I've found that size 4 is by far the best all around size spinner for the way I fish them, sometimes I will drop down to 3 in the summer when the water is super clear but 90% of the time it's a size 4. I do change colors depending on conditions though, in high water with a lot of color I will through on something chartreuse, if the waters low and clear I've found black/pink to go very well together.
You must log in or register to reply here.