F
FishFinger
Got the opportunity to join Osmosis for a summer steelhead run on the Columbia yesterday. With 8,000+ summers going over Bonneville daily, who could pass on an offer like that?

We got on the water at around 8:00 am and opted to try a little side drifting to begin the adventure, as Osmo marked large pods of fish below us. The east wind hampered the SD action, but thankfully, as the day wore on; the wind became our air conditioning....

Over all it was a fantastic day. The bites came with fair regularity and often in the forms of quite violent hits. When on anchor I was given the choice of what gear to swim. My initial choice was a sharp looking clamshell I was sure would draw blood. Osmo went with a spin & glow dressed with a beautifully cured cooner. The first fish went to Osmo in the form of a super bright native weighing in around 12 lbs. Playin’ my Gilligan role I did not fail to correctly net the brute...

After the fight, the fish was exhausted and I got to witness Osmo's skill and patience in the revival process. I was amazed to listen and learn his understanding of the effects the stress of the fight to the fish and the visual cues when you know what to look for. The eye position is a "dead" give away of the potential "brain damage" I watched in utter amazement as it recovered while closely observing it eyes return to their functional positions prior to it bolting off. For The balance of the day, I felt more aware of trying to limit the damage I would do during the fight; as we were hooking natives 2 to 1.

After changing up my gear to that of Osmos.. The action on both rods improved. Almost as scripted, the hits alternatated from one rod to the next.

The third fish as our first hatchery fin clip @ about 8 lbs.

The next hit was so out of control it was hard to believe what we were seeing. The strike buried the rod tip to the water and instantly the reel was spooled of over 100 yards of line. After the second of shock Osmo proclaimed, "you got a pig on..." Yeah it was either a pig, or sturgeon of even a log.. Or something unusual.

Osmo and I reached the rod holder at the same time. As I took it in hand he managed to pull enough slack to allow the spool to grab and take up the line. As fast as the reel emptied, I found myself screaming to take up the line as this "creature" turned and headed back towards us. My heart was racing at the notion of attempting to land a Hog on fairly light gear for the task. I even though about handing off before things got out of control. Almost as suddenly as it stated the action became that of a "standard" native steelhead fight. Sure enough, the monster had been merely a 12 lb summer hell bent on returning to the ocean. No the drag was not loose in case anyone was thinkin'... It was just another first for me. Seeing a steelhead spool a reel in nothing flat.

It really didn’t mater what spin & glow we used, the Ted Bundy, the Jeffery Dalhmer, the Diane Downs, the John Wayne Gacey with hemorrhoids, it made no difference… they all felling to one group; Uni bomber… Cause at some point they all exploded…

Thank you Osmosis for a day, it was a blast, and it was great to shake the bad juju that had followed me on your boat all spring.

I am proud to announce.. Smell my finger… It again smells like fish.. Not skunk…. 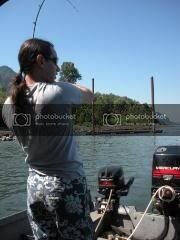 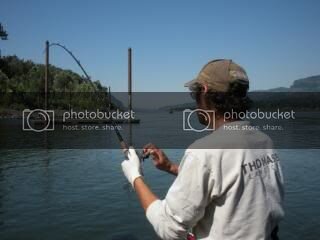 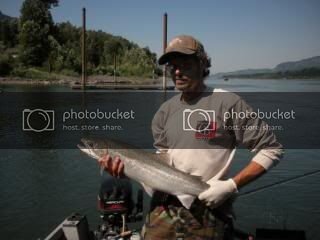 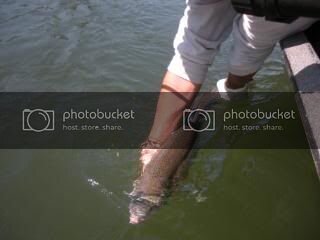 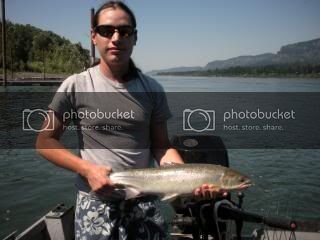 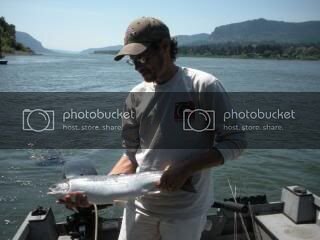 Last edited: Jul 28, 2009
K
Kodiak
Congrats guys! sounds like a nice way to beat the heat!
M
meluvtrout
Yeeee-haaw!!!!
Y
youngbuck307
Hell yea guys way to go get them hope me and sam will be out on the big C to try to draw some blood. We will be on the bank but hope we can atleast get into 1 or 2.
M
metalmania

youngbuck307 said:
Hell yea guys way to go get them hope me and sam will be out on the big C to try to draw some blood. We will be on the bank but hope we can atleast get into 1 or 2.
Click to expand...

Fishfinger, your one lucky SOB. Alan and I hit that same spot today and wen't 0-3. Water was just to dang hot and to much water was spillin. Congrats man, those fish are gorgeous.
O
osmosis
Oh yeah, today was a rough one. Wind was heading the opposite direction and we couldnt stay straight enough on anchor to fish with both the sea anchor out and the kicker in reverse! Also didn't help having yachts going through the locks every 5 minutes!

FF was there on the right day though.
Lucky I grabbed that tuf-line on the one fish as FF was one headshake away from that arbor knot popping!! It was just as shocking as him almost getting spooled when we saw that it wasn't even the big fish of the day .
As always good fishin with ya, We'll get out there again soon.

I got a seat on my brother's buddy's boat for this Saturday, hitting the C for summers (for the first time!). Hoping to get half the action you guys did!
B
bir48die
where did you launch?
O
osmosis
The fish are all over the big river, pick the launch you know the bast.

Hope saturday goes well for you guys, expect a lot of company out there on the weekend though.
M
mgdguy

osmosis said:
Hope saturday goes well for you guys, expect a lot of company out there on the weekend though.
Click to expand...

Thanks. Yea, I'm sure it will be busy. We are starting out bright and early.

Any rigging advice for a CR boater newbie? :think:
O
osmosis
first off make sure you are being safe with anchoring. Get it set and make sure you use 6 times the depth where you anchor of scope. Meaning if you anchor in 10' of water let out atleast 60' of anchor rope. You probably already know all that but it doesn't hurt for me to remind ya.
also a sea anchor is nice.

Fish in 18' of water and less. Most of FF and my fish that day were in about 8'. Yeah sounds odd since its such a huge river but you really do better more often than not if you fish shallow for steelhead out there.

We used a 3' dropper with just enough lead to keep ya down there, and a leader the same length as your dropper. We did best with spin glos' with 3 6mm beads below it, above 2 1/0 owners with a coon shrimp on the upper hook. We caught fish with every single color we put out there.
Plugs, spinners, wobblers, there are all kinds of things that work out there if you prefer them.

If the wind and bonneville play nice you guys will find fish out there.
M
mgdguy
Thanks for the tips! I'll report back after the trip.
M
mgdguy
Well sh*t, the boat's motor is having trouble. Tomorrow's CR trip is OFF That's the third time

We're heading to the Gorge bright and early. I'm pessimistic at best now
O
osmosis
I have a couple seats open next week, I'm waiting to hear back from a few folks but if I dont I will shoot you a PM. see if we can get you out there.
M
mgdguy
Dude that's awesome, I appreciate that. I work during the week BUT I have some flexibility and with a little notice and (hopefully) a quiet week I might be able to swing it if it works out! ray:
Y
youngbuck307
Think this is the first time I have looked forword for the weekend to end lol..
O
osmosis
If monday is anything like today up there, it's gonna SUCK. There is about 15knot winds making anchoring impossible. The phone report I got an hour ago is that the boats were upstream of their anchors the wind was so relentless! Nearly impossible to fish. Cross your fingers for the weather to behave monday.
Y
youngbuck307
O man it better behave!!! i been looking forword to hitten the water with u for a while so stuff really needs to work out ill have to prey for it, it looks like. but when it comes to a wind problem who do you pray to the fish gods or the normal god
S
steelhead_stalkers
Iv never had much luck with the fish gods so I would stick with the regular God! :lol: Hopefully it works out for you guys, I know I had a blast on the big river when I had the chance.
O
osmosis
I think it falls under the category of begging mother nature

I hope the conditions play nice.
You must log in or register to reply here.