Bass in the hundreds

S
steelhead1
Just got back from a four day float down the Umpqua,yellow creek down to elkton.The fishing was epic,almost too easy!between the three of us we guessed forty-fifty fish a day.Most were caught droppin a plastic worm right under the boat and just driftin along,pulling up fish after fish.the water was so nice,the weather was perfect and not a single blood sucking insect!(did see some leaches).Had to walk the drift boat through grant creek rapid,but we ran the big one at smith ferry and got totally inverted sideways, and took some water over the rail.By far the most exiting part of the trip!Average size maybe a pound with some bigger fish mixed in.Hooked a monster on the first cast one morning, thought I was snagged and started to jerk it free when the fish went airborn and snapped me off(I swear,there were witnesses!).This is a trip I would highly recommend to the bass fisherman,pontoons would be ideal,just keep the afternoon wind in mind.We had Wayne from Arlenes in elkton shuttle us around for a very reasonable fee,I have his number if anyone is interested.
F
fletchall5
Out flippen ragious:clap:I also floated the Umpqua several times, a fish every 5 min. Gotta be the best smally fishin around,hope to go back soon. Sounds like a real good tripp you'll never forget....BOOYAH....Ken
S
Scarecro
Ya i caught this one on the umpqua out tyee yest. caught around 20 ina cpl hours. 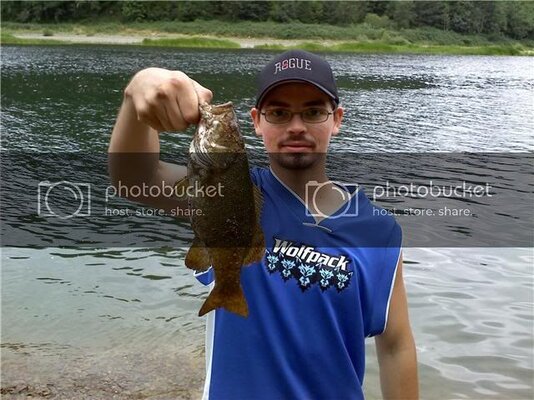 Last edited: Jul 12, 2009
J
JTLunker
Nice fish!
H
Hawk
Reel Beauty Bro Cro........................
F
FishTastic
I had no idea such critters live there. From the sounds of things the resident population all have whiplash!
S
Scarecro
thanks guys. i l.ive about 10 min from this secret hole of mine so if anyone is ever free in the area i would love to show you OFFers.
You must log in or register to reply here.