Moderator
This site has been awfully quiet; for quite some time. So...

My dad's ol' man, gave me my first rod & reel circa 1966. A fiberglass Eagle Claw, with a D.A.M. Quick 330 spinning reel. Sadly that set lies at the bottom, of Blue Lake. The one, next to Suttle (now private, I believe). But that's a WHOLE 'nuther thread! LOL

Ever since; I've bought / sold / traded / and used many Quick spinning reels. Maybe a fly reel, or 2. But I had never seen a baitcaster, until recently. A year, or two, ago--while returning from Hagg down 99--I found a sweet deal @ an antique shop. A 6' Tubular Fiberglass, Browning Silafelx casting rod w/ trigger for Bassin'. Sweet in itself. However, it had an even sweeter reel: a Red Man DS200L low profile casting reel; made by D.A.M. Quick in Germany.

I'll post a link, for the reel, in a reply to this thread. For some reason I can't seem to add/insert more than just one link, at a time.

What this guy has done with some of his old school Quicks; is amazing. They look like works of art, to me. With the exception, of the green n' yellow paint job on one. LOL

What about some of you, out there in OFFland? Have you used Quicks? What others, have you used--and enjoyed--the longest? Mitchell? Abu Garcia? Daiwa?

Moderator
The hotlink below, will take you to the aforementioned Red Man reel:
Last edited: Oct 1, 2016

Moderator
Here's a Daiwa Supersport No. 1 spinning reel that, was a recent garage sale find. Just figuring out which rod, to pair it to. Or if I want to sell it; as mine even still has a sticker / decal on the knob of the handle! But that'll be posted, perhaps, under the buy/sell/trade section.
P

troutdude said:
This site has been awfully quiet; for quite some time. So...

What about some of you, out there in OFFland? Have you used Quicks?
Click to expand... 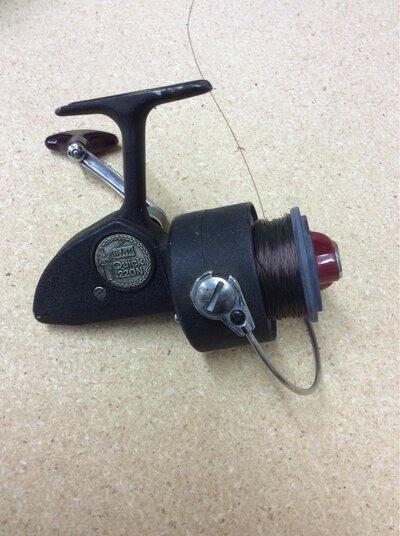 One of my favorites. This reel served me well. Sadly it just sits waiting to be re-spooled with some fresh line and attached to a medium action rod. M-m-m....maybe I should do that!
S

I can’t even begin to tell you how many searun Cutties I’ve caught on a Dam Quick 110. Great little reel that went by the wayside many moons ago.

Picked up 330n with an 8.5 ft Eagle Claw graphite in xlt shape for 10 bucks in LaPine thrift store.

Spoons with a D.A.M. Quick Reel