F
FishFinger
Hello all, as some of you may have noticed; I've been AWOL from the forum here for a good 6 weeks or so. Summer wasn't supposed to be as busy it has been thus far... Part of my distraction was the completion of the Double Lu.

Finally after much hate, discontent, and damage to the pocket book; she was rendered "sea worthy".

After Meluvtrout and I ran a shake down cruse at North fork the week before, we got the itch to put her in the Big C and take our shot at the up river B fish below Bonneville before the season came to a close.

All things considered we had no problems getting out to our spot, setting anchor and slipping in to the slot on our first attempt. Damn near poetry in motion, w/ current.

Oddly enough right next to us was my good buddy Andy and Captn' Mike. I understood why Andy hadn't called me for 2 weeks as his life had become fish / working. Simply told him, if I can find you on land, I'll find you on the water.

Because of the tidal influence MLT and I figured our best window for success and got a seat for the show early. With our gear out we relaxed until we both couldn't take it any more.

Staying consistent twice in two seasons I have fallen asleep while hunting June Hogz. Long after all the surrounding boats left, as I lay there on my belly, I hear this click, click,, zzzizzz click, click, click. Assuming MLT is up and checking the gear I resumed my slumber. Quite rudely I was awakened by MLT yelling.. "Fish On, Fish On", from the bow of the boat. In my stupor I look up to see my pole tip darting towards the water with great fury... Just as I reached my rod.. it fell silent.

OMG not again.. shades of regret swept over me, no one to blame but me once again: for a trip home empty handed. Trying to disguise my personal contempt, I regained my composure and returned my gear to the bottom, vowing to not sleep again for the rest of the year....

I had confidence in the "special blend" Alvin I had rigged, I watched my rod with hawk like intent for the next sign of fishy interest.

What follows is epic.. The stuff of legends.... lol


Almost like something from 'Old man and the sea" this brutette and I were locked in a dance to the death. She bolted I gave, she charged I retreated, her head shakes were absolutely violent, ripping, tugging, peeling line causing the penn 209 to scream with glee....

She found the seam and planed hard against the current stripping line yards at a time. As she paused I steadily pumped the rod to apply more tension for control of her head. Ever so slowly she came in closer. 20 mins and we still hadn't seen her... Once she neared the surface, it was clear to see this was a big fish. And as she saw us it was back to the depths once again, and the battle repeated it self once again.

Another 10 minutes and she was drawing near. Out behind us perhaps 30 yards she breaks the surface and head shakes to throw the hook, no luck the owner hook is buried deep in her jaw and I begin to sense her panic.

5 mins later she 6' down, 10' off the stern and holding. With the net out the drama unfolds. inch by inch she draws closer but still too far away to net.
Each time she nears the boat she turns and runs.. Again and again she bolted only to be guided back off the stern. slowly she creeps nearer, with the net positioned against the boat we draw her in for the tail scoop. Each time she see it and swims out before it's lifted. 5 or 6 times this happens.

With each miss the odds seem to stack against me. Just as she lines up I bark "up.. up.." and again she moves quickly out of the net. MLT and I are beside our selves, it's so close but not yet caught.... I draw her into position once again and in a monumental effort MLT commits her to the net. We both grab it and draw our bounty into the Double Lu.

Can fishing be better than sex? That day I think is was..lol

And funnier too......... This pict cracks me up.. Perhaps the biggest fish MLT has ever held upside down.. 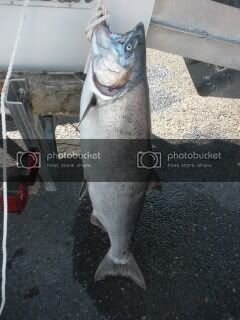 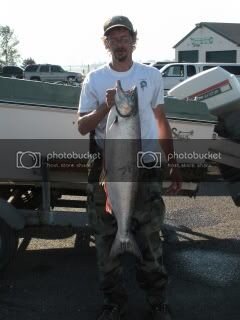 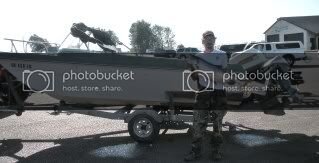 The Double Lu... Not the most beautiful girl on the water but looks aren't everything.... 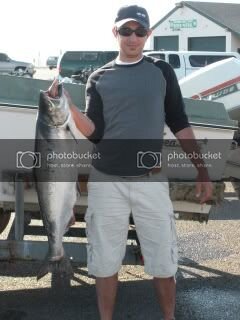 Bonneville huh? Gosh I can't wait till October.
O
osmosis
Very cool story, and very glad to hear one of the most epic skunks in Oregon has been lifted!! Way to go guys!

In the future remember to Never net tail first. Always head first!! think about it, fish can't swim backwards. I am very glad to hear after a fantastic battle like that it didn't get knocked off. tons and tons of fish every year are lost by guys netting tail first.

the two of you really deserved that fish for all of your persistance!

Raincatcher
Hats OFF to you both

Hats OFF to you both

Fantastic report! :clap: Beautiful fish! :dance: Whatta great way to spend checking out the Double Lu. Sounds like she did right by you guys. Thumbs up to Meluvtrout too. I am a nice shade of emerald green right now.
Be safe.
Barb
J
just1nook
Way to go Dan! Was wonderin where you were. Congrats on the first fish bonked on the new vessel. Glad you had your lines in the water before the bite was on.
M
metalmania
Nice fish guys, congrats:clap:.
K
Kodiak
Very nice!!!!! you portland guys and silvery lookin fish...probably poisionous.:lol:
N
ninja2010
awesome report and pix!!! way to go you guys.
P
PDXKush
Yee Haw Dan. Nice lunker. So are we still allowed to retain Adults on the Columbia? If so I need to get back out there. Once Im well that is.
F
Fishtopher
Kinda looks like he's dancing with the fish...

PDXKush said:
Yee Haw Dan. Nice lunker. So are we still allowed to retain Adults on the Columbia? If so I need to get back out there. Once Im well that is.
Click to expand...

it's closed below Bonneville.This fish was from July 1...

Irishrover
Great story and fish. Glad to see you back.
H
Hawk
That's a Reel Beauty Brothers & a Great Story...