bass
Last trip out was a shaker fest for me. I had a need to catch a decent sturgeon, a deep burning, inconsolable need that burned my soul to its very core..... I was not in the mood to be denied.

I launched out of Swan Island with a friend of mine. He headed straight for the happy hunting grounds while I spent a bit of time searching for some crappie, but to no avail. By the time I made it out of the harbor Brian was anchored up a fair distance downstream from the mouth. I looked at him as I sat sweating and grumbling and decided to stop on the way down to meeting back up with him. Apparently the sturgeon gods felt I had served whatever penance was necessary for whatever crimes I had committed.

The current was so light (incoming) that I only needed 2oz (and that was a bit of overkill). I hooked up a chunk of anchovy and sent it down to the watery depths. I was actually kind of tense since it has been a while since I had caught a nice fish and I NEEDED to.

Come on man, just a taste, I can quit anytime, come on just give me something...

All of a sudden I think that I feel the daintiest of taps. Was that a really a bite? The question was answered when the fish just started to swim away. I took the reel out of free spool and started reeling to bury that circle hook. THUNK, oh yeah, that feels solid - then peeling drag - this is what I need!!

I drop off anchor and let that fish have her way with me, like it was my first time 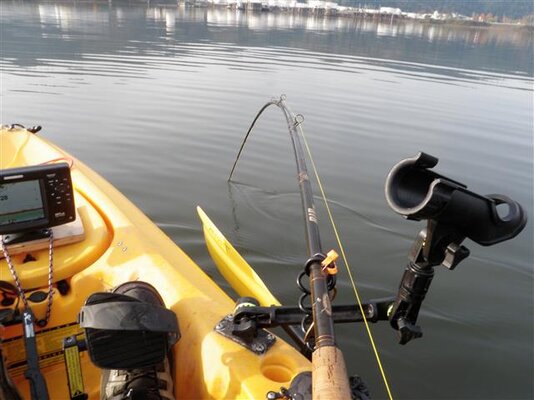 She pulled me in circles generally heading upstream and after an amazing fight (these fish are like on steroids right now) I land a beautiful 43" sturgeon with the longest, sharpest flukes I have seen. (I should have taken a close up picture.) 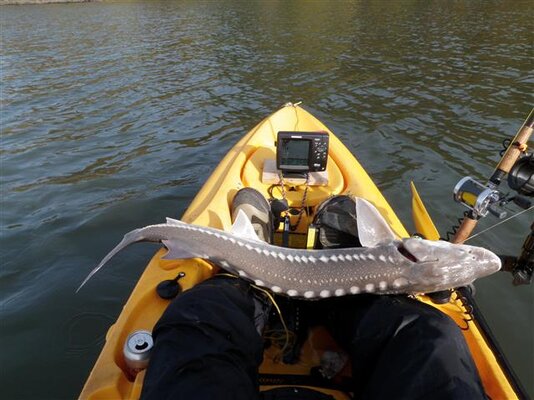 I am pumped. That is the first nice fish I have caught in a while! Knowing that the sturgeon gods are viewing me with pleasure I race back to my anchor and with shaking hands I managed to bait up with another chunk of anchovy. I toss it down to the murky depths and after about a few minutes wait. I feel a very light tap, tap, tap. I throw the reel into gear and bam! 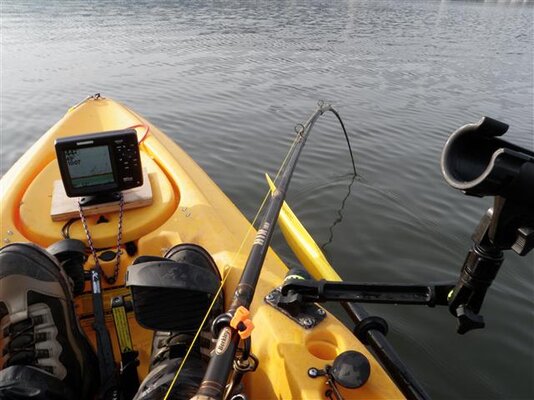 Another good fish takes my on a sleigh ride. Man, these fish are fighting like demons right now. I was sure this was an oversized, but no, it was a 45" fish that once again had really long, sharp, dagger-like scutes. These fish were brutalizing my salmon rod!

Well, you get the picture of what kind of day this is. I throw out a third time, expecting a good fish now Well, you know what they say - it ain't being cocky if you can back it up: 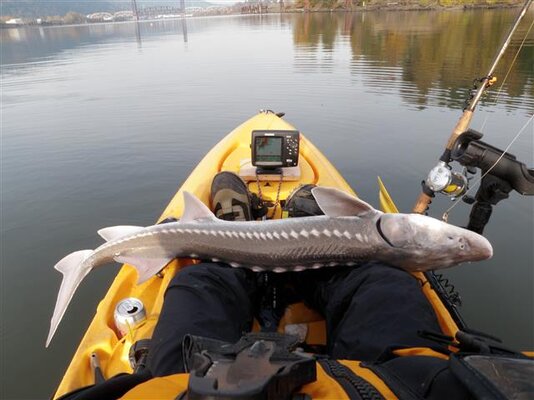 Of course, when you are on a roll you let it ride (kayak sleigh ride that is). Next fish is a 41" keeper. 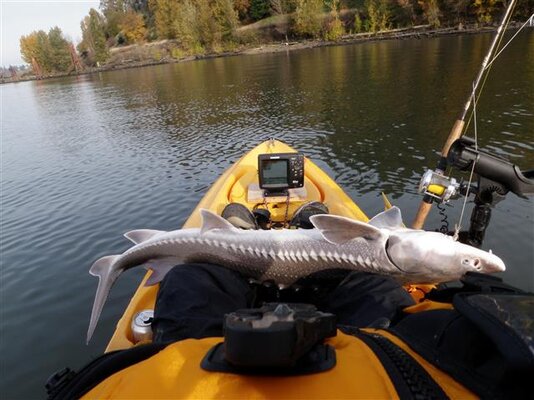 About this time Brian paddles back up saying he has caught a few shakers and a 38" fish. I let him know that there is a quality bite going on and he anchors up next to me. After the 4 keepers I catch a couple of small shakers and then Brian hooks a nice keeper.

Amongst a handful of shakers and a few just shore of keeper sized I manage one more mid-40s keeper. 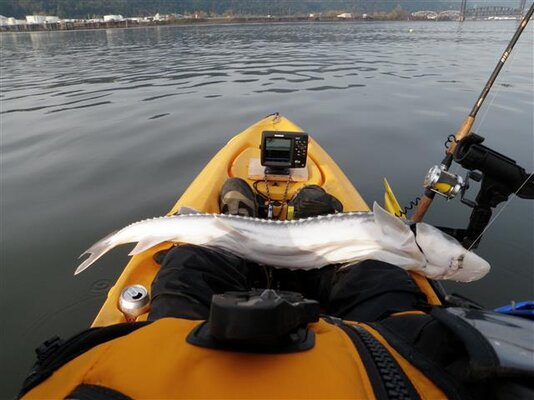 Brian ends up catching about 5 or 6 keepers before the bite finally slows for both of us. I am tired and happy, Brian is tired and happy. We hit a few more spots with sporadic luck and as the tide hits high slack the bite really dies down for us. Brian catches a few more decent fish, nothing but shakers for me.

I ended up with 5 keepers in the 40s, 2 just short (36 and 37) and a bunch of shakers below that size (maybe 7 other fish). In all it was a great day to share with a friend on the water. We had several doubles during the course of the day and got to watch each other fight some quality fish. Just a great day on the water.

I really needed a day like that. Now that I have had a keeper-fest I am ready for the oversize-fest

rogerdodger
sweet.
M
Moe
Damn it bass now I know why I couldn't get any any keepers yesterday, they were attacking your anchovies! My squid and smelt haven't gotten me a keeper since the open day. Do you run fresh anchovies or you buy em pickled?
R
Rain
Sounds like fun :O

Moe said:
Damn it bass now I know why I couldn't get any any keepers yesterday, they were attacking your anchovies! My squid and smelt haven't gotten me a keeper since the open day. Do you run fresh anchovies or you buy em pickled?
Click to expand...

I just buy the frozen packs and cut them into chunks (I used to use whole anchovies, but not I cut into 2 or 3 pieces to make the bait last longer). My friend was using chunks of herring and doing just as well. I really don't think bait matters as long as it is reasonable. There are certainly days where I get nothing but shakers. In the kayak I move around quite a bit in looking for quality fish. They are rarely in the exactly same location as the previous trip. If I am getting shakers I will move once I have caught enough to feel that I am not going to get a quality fish. From the bank that is not as easy to do.


Thanks everyone else for your kind words. It was a really special day out on the water.
E
eugene1
Sounds like an epic trip minus an oversize! Good to hear.

eugene1 said:
Sounds like an epic trip minus an oversize! Good to hear.

Yep, we kept saying we need a six footer to make this into the best day ever
You must log in or register to reply here.