Snuck in a little fishin' yesterday

M
Mad dog
a lot going on for me right now but I had to get out 1 more time!

Got 1 on my sons 7wt., kicked my butt!!! Never felt totally in control of that fight! Thinking about it, it has been since july 2007 since I have even picked up a flyrod!!! :shock: DAMN!!! 2 years. I managed to get it working well enough to rollcast some line out and get it mended and pretty quick my indicator jerked under with a pretty serious takedown! After that there was a little bit of hollering....About 10 minutes worth! My son got me lined out on the finer points of fighting a large fish on the flyrod, by the time I landed it my forearm was tired! Been awhile since any fish has made my arm tired during a fight! 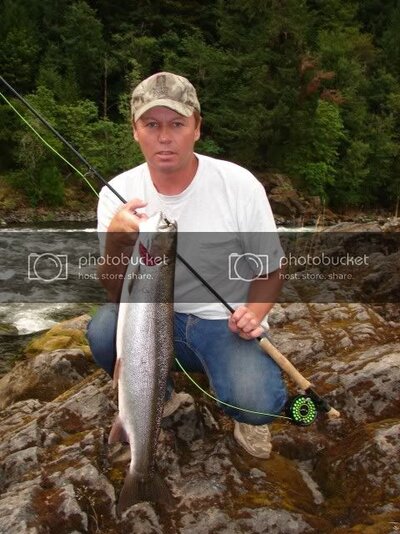 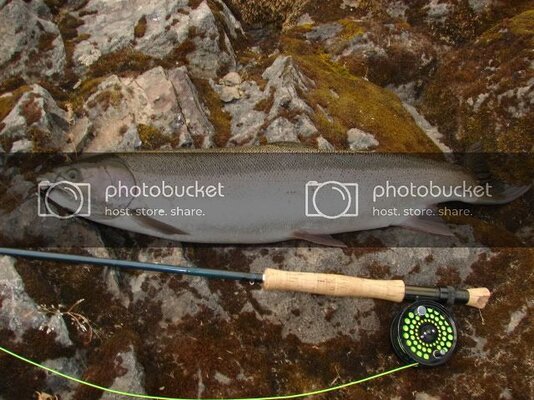 After that I switched to spin gear and a float/fly combo and managed another small hatchery hen. Earlier that morning I had caught 4 jacks on regular drift fishing gear, not a bad morning! 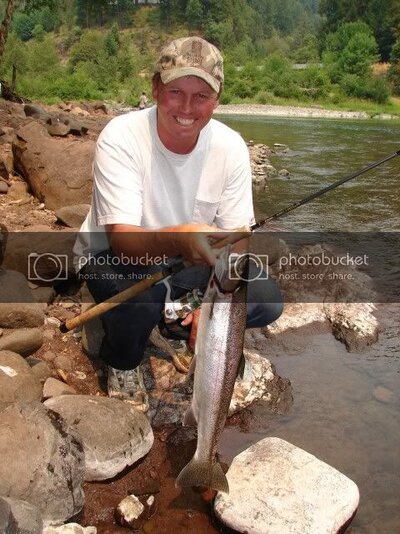 Excellent way to spend the day! And good for you for being willing to listen to your son and take his advice. Fishing with family members on a sunny,productive day...doesn't get any better. Congratulations! :clap::clap:

Be safe.
Barb
B
Bohemian
Nice fish! Great pictures!...your making me want to get my fly rod out of the closet

Troutier Bassier said:
What is that?
A Black Bugger?
Click to expand...

I don't know what it's called, I just found it on the bank and tied it on my line to give it a try....seems to work!
T
Troutier Bassier
:lol:
M
Mad dog
Actually, I don't know the official name of the fly....we have always called them ugly bugs or rubberlegs. They work great for large trout of steelhead.
F
FishFinger
Wonderful report, Steelhead on the fly is as you experienced is quite the rush. Giving me the itch to break out the 8wt myself as it been hold up in it's case for far too long...

I believe the original name for the rubber legged unit is Bitch Creek. It's a vintage pattern that usually sports white rubber legs. With Black ones it could well be the name has been modified as well.

Once again congrats on your fine fish....
T
Troutier Bassier
But,
It dosent look like a Nymph
F
FishFinger
Re-read the OP and notice the key words "strike indicator" suggesting that it was indeed a nymph.
T
Troutier Bassier
Oh Sorry,
I was looking at the Picture.
You must log in or register to reply here.