Passing on a story

C
colbypearson
So recently, a group of friends by the name of Bass Brigade on facebook, youtube etc.. held a contest to who had the most inspiring fishing story, i won that contest and won the grand prize of over 575$ :shock: in various big bass gear... i feel i needed to share with you guys at OFF hope you all enjoy my short summary of my fishing so far i know i did


It all started in the mid 1990's i was born December, 26th 1993, not necessarily born into a fishing associated family. I never had any real direct contact with angling other that a yearly trip or two at the ages of months - to about 2-3 years old. I am not sure when it all started but around 1996-1997 when i was around, 4 my grand parents moved out to the woods into the "pond house", We are pretty tightly knit with our family locally here and we have always been in close contact with each other so most of my oldest memories had taken place there.The pond itself is fairly small but back then it kicked out some good bass up to 4lbs. I dont remember anyone guiding me what to do or how to do it i just cherish that someone introduced me to my element, i would spend countless hours on the banks of that pond practicing and catching bluegill and bass. My favorite lure back then was a fire-tiger flat fish, i truly think that the days spent there solidified my journey into bass fishing and where i am today. As well as the pond i was always a creek rat little kid playing and catching crawdads and fish in local creeks and irrigation ditches. Every day after school i would hit the creeks and see what i could catch and watch, i lived in a city but i always found water. After that i moved to a place called central point, Oregon. i originally thought it was a tiny little town i had hated since day one but eventually this place has grown on me, my local waters at the time were the lakes surrounding our valley..... and these urban ponds full of litter, algae and some wierd people as well they were called the expo ponds and at that time i avoided them. When i turned 12 i accomplished my biggest feat so far and caught my biggest bass to date in Oregon waters it wasn't just my personal best either ; ) -- I was featured on ESPN.com and the local newspaper numerous times for the biggest large mouth bass ever recorded in Oregon waters. I kept on fishing hard trying to make the best approach to various situations and make the most out of my time spent on the water. I started fishing my first adult tournaments when i was 11 years old and have been dedicated to competitive bass fishing and trophy hunting Oregon style ever since. I am now nearing 17 years old and have a long list of personal accomplishments to my name, every day spent on the water i try to be the best and most effective i can be. And those trashy and over pressured ponds i mentioned, i have now realized they are a great gift delivering me some of the toughest and most over fished water i have ever seen but sometimes they pay off big, they give me a chance to strengthen my game everyday and adapt to every situation imaginable without them i would be far from where i am today. So that's a brief summary of my passion of the sport thus far. One day i plan on touring the country with the best of the best and competing head to head with the people i admire on the bass tour's now.......watch out i will be preparing until that day


still unedited like the day i wrote it i hope you enjoyed. 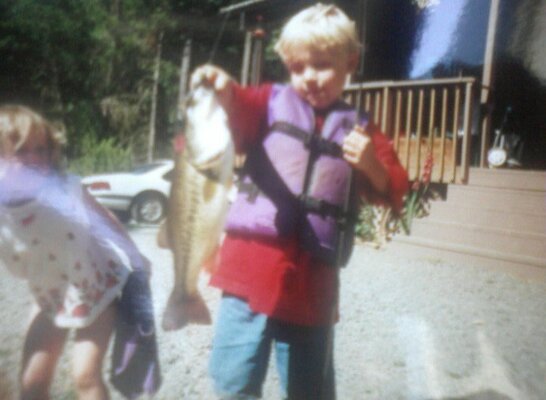 im still in shock this took place an hour ago!!!! thanks for the read and support, Colby Pearson
T
TTFishon
Nice story dude! That was awesome! Hopefully one day I can say "Hey that guy on TV is a bass guy on a fishing forum I belong to" You've accomplished more than I have on my bass fishing adventures and I'm 42. Thanks for sharing.
T
todd
good story.well writen
O
OnTheFly
Good write up Colby. There is no doubt in my mind that you will catch many more trophy bass. Perhaps another record.
B
bigsteel
yes,great story colby.no doubt you are a great young fisherman
R
ryan808
Keep up the good work
C
Coastaldweller
Congrats bud! Great story!
F
Finneus Polebender
I never second guessed the fact that some day we would see you fishin against the best of the best! Great story and an inspiration to all us bass anglers young and old ! Sure have appreciated all your help and all your great posts . Congatulations to the most deserving angler out there , Go get em Colby!

Troutski
Very cool story, thanks for sharing. See the fish have no idea how old the angler is...

Troutski said:
Very cool story, thanks for sharing. See the fish have no idea how old the angler is...

i was about 4
F
Finneus Polebender


My grandson Dominic is 5 and this Grandpa and Grandma just moved to the pond house he is quite the fisherman himself and can see your story coming to life here with him kinda choked my wife up a little when I had her read your post . He will probably be emulating you and continuing to sharpen his skills out back here will be a joy to witness . Once again congrats on your hard work and sucsess. Gonna get there and fish with you and Shane soon !
C
colbypearson

Finneus Polebender said:
My grandson Dominic is 5 and this Grandpa and Grandma just moved to the pond house he is quite the fisherman himself and can see your story coming to life here with him kinda choked my wife up a little when I had her read your post . He will probably be emulating you and continuing to sharpen his skills out back here will be a joy to witness . Once again congrats on your hard work and sucsess. Gonna get there and fish with you and Shane soon !
Click to expand...


For Sure im glad my story inspired you guys, i hope your grandson can one day be one of the best of the best maybe we can fish against eachother someday, keep the dream alive in him hes lucky to have such a dedicated grandpa to teach him, im odd i had a nack for it since day one and no one got me into it i always thought of that as odd that one day i just picked bass fishing up and never stopped, i fish with my grandpa a lot now he picked up a boat last year and now im teaching him, hes a good learner and we have spent a lot of great days on the water
H
Hawk
ConGratulations, & mighty nice story Bro

One of these days you will be competing with Skeet Reese.

T
Throbbit _Shane
Congrats buddy. Awesome story! I look forward to fishing with u more.
You must log in or register to reply here.