F
FishFinger
The last few weekends I’ve been on a quest…….. To nail some early fall nookies, coho, and the occasional steelhead. I usually wait till the runs are further up the Columbia. But, having heard the stories and seen the pictures……. I had to get a piece of this fishery hot out of the salt. Well, technically were fishing the marine band just inland from buoy 10. It is still salt water. 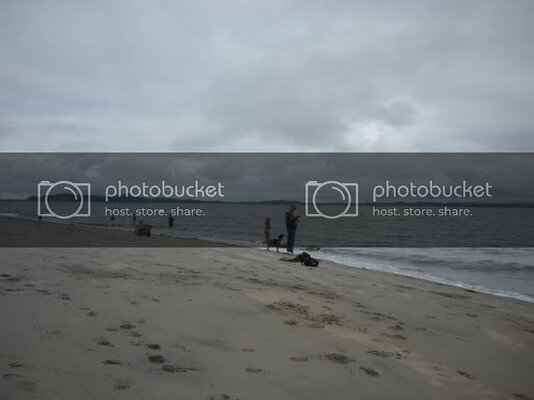 2 weeks ago, my alarm goes off an hour late. I fly to seaside grab Andy & Andy and head for the beach. Two other friends expecting to meet us early… get to fishing….
6:15 am Low slack and a 35 lb Chinook chases a #6 blue fox over the shelf and into the shallow surf……. Kabooom… Or so I am told, as I was friggin tardy to the show.


We get to fishing as the tide began to turn. Soon, every cast becomes snared in sea weed / grass. It was a flood tide, no definable seams and junk drifted everywhere. 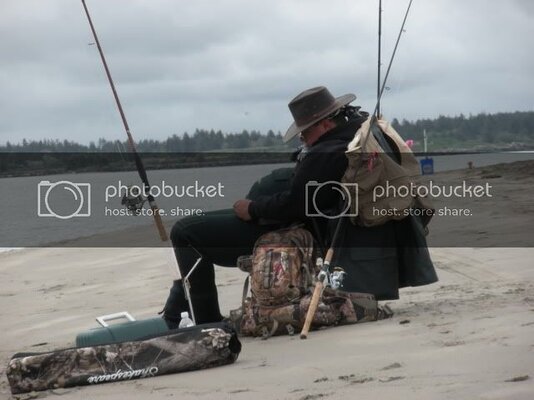 A lot of folks hung out to fish the incoming tide as well. To no avail, nothing happened for hours on end. 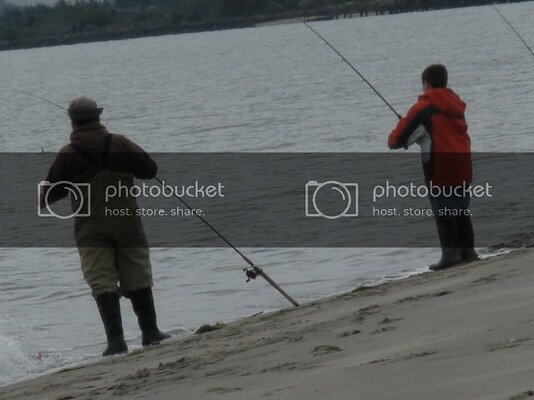 Little Andy was running out of patience. I figured there was only one thing that was gonna save the day.

A huge hole in the sand. 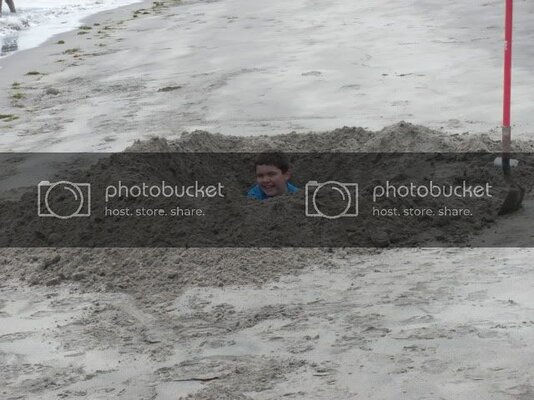 For 6 hours we dug at the high tide line. We finally breached the wall 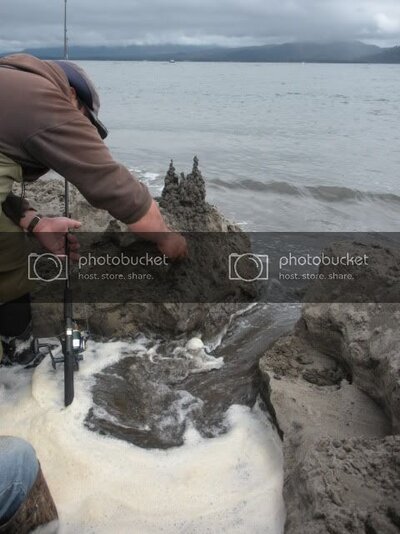 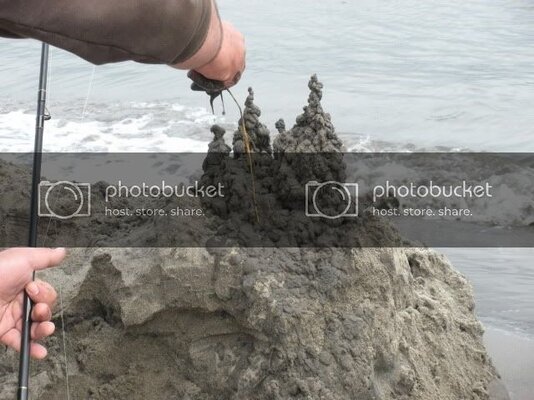 Slack high tide, 10th cast, Dave is under attack. Just like earlier it followed his spinner up over the ledge on the tail out of his drift, and wham!

Except Dave can’t move that fast. Had he stepped back he could have had the surf beach the fish straight away. But that’s not what happened at all….. It turned tail and booted. Were guessing it was perhaps a 20 lb silver or big steelhead. It was chrome bright when it broke water, did a head shake and broke his leader.

Andy was right, he hooked one. A violent attack in 3 feet of water.


We did find two eels in the crab traps.
Creepy. Thought OH NO….. Snakeheads…… 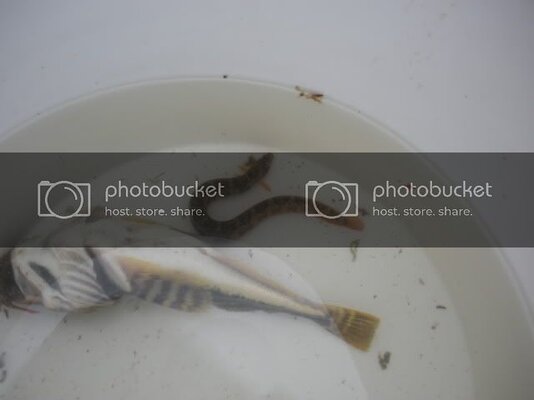 I……. Am ready, been twisting 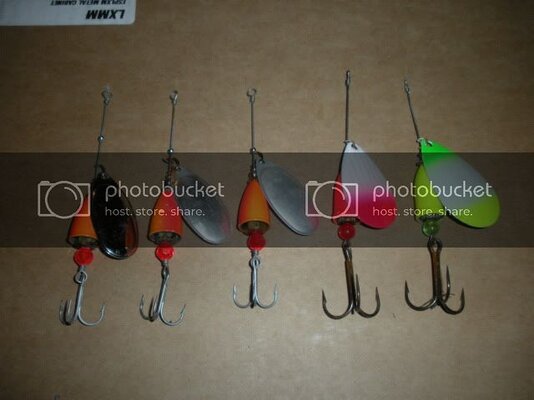 All #6 some with liberated blue fox parts. 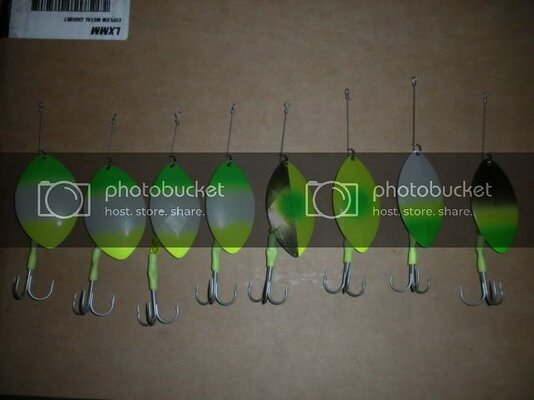 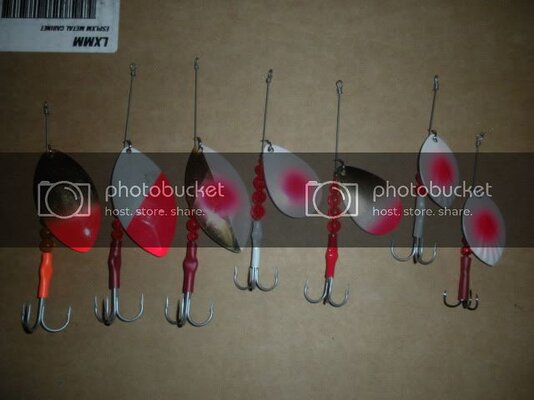 Beach is packed….. Not shoulder to shoulder but, folks have gotten “their” spots….

We picked a fair location, considering….. Casting away, finding the ledge, no weeds, just waiting for the slammmmmmmmm. Nada…

Andy moves down the beach and slip in between two squatters. Of course they say something, “ your not gonna fish here are you”. Yes… I am. 2nd cast bangs a modest steelhead and I mean right at the guys feet. ( He dose that all the time, especially at Dodge park) 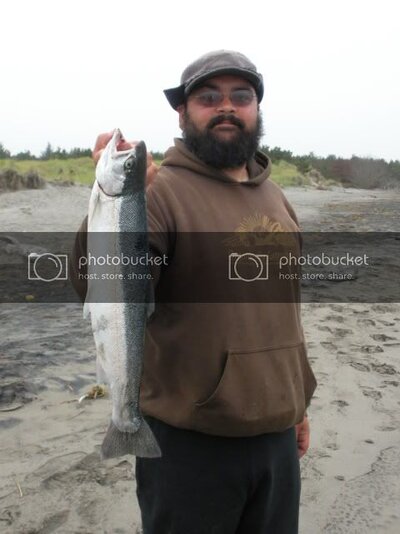 Two more rods down the beach go off and then nothing……. 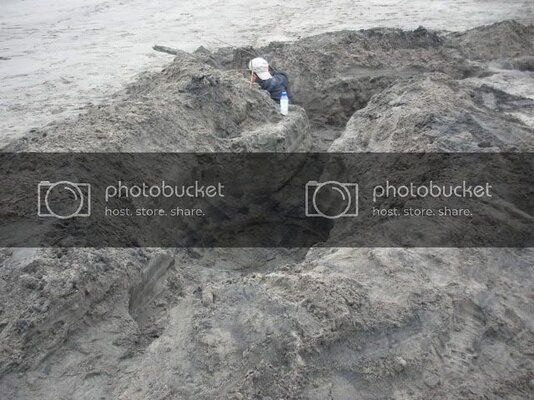 With a bigger hole. 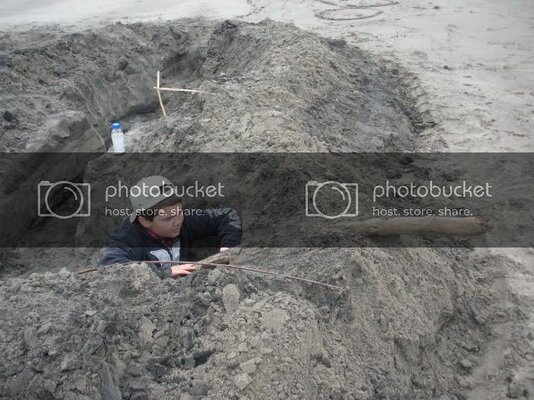 One worthy of bunker status.


I’m getting tired of digging holes… Time for these fish to start moving….
Last edited: Aug 17, 2010
C
cwsmith
great post! had fun reading about all your adventures. nice fish, hope you catch some of his friends!

Raincatcher
You guys are my heroes... lol! Love the fish and the trench!
B
beaverfan
That sounds like a lot of fun, I might have to try that out. I've got just the spinnners for that, big 1 oz bodies. I think I have some 1.5oz ones too.
F
fishnquest
Fun story, man. Thanks. I keep hearing they are coming.
H
Hawk
Great Story Bro & Beautiful pics.

Did ya find any sand crabs in the hole??

J
JeannaJigs
Possibly one of the most impressive trench's i've seen on a riverside combat zone
I
imfishing
Greetings All,

You did not even get my good side.

Anyhow its all for a good cause, No Harm. Nice fish BTW.

I aim to voutch for the no fish there....Dead Pools All Around. We have pulled two Nookes from there so far.

Hope they won't be much later. Course I have to work the weekends so it makes it that much more tiresome with no fish.

You did not even get my good side.
Click to expand...


No crabs in the first hole tho we did have a rising water table issue.

Yes it is a very small world, Spinning quickly.

I remember the hole diggers, I remember thinking how awesome it would be to simply slow down and make sand castles with my son. In between his video games of course.

I get off work at 11:00p.m. and then drive down to the "SPOT" I mean "SPIT". I get there and I'm very rummy, so I fish a little then I sleep A little [Please Don't Wake Me Up - BTW], Then I fish a little then I have to race back to Portland and go to work making his airplane parts again. I wish I could just have a day off, But hey...It all builds character. And I'm A Character.

Those spinners look divine. To tap into the creative and use it to produce food, Is to be full circle with nature and humanity.
Whom ever made those spinners has potential to be a master adventurer - IMHO. Their grasp of color and mechanics is exquisite.

The week after I last posted I returned again to the "beach". Prior to the right tides on Sunday, we sat around configuring the "right" spinner combo. I liberated more #6 blue foxes and we opted to add some hootchies. After twisting up a few new patterns, we headed out after em.

Rigging up my leader, grabbed a spool of 20 lb mono. It seemed be a smaller dia line than I felt it "should have been", rechecked the spool, yep 20 lb maxima, so OFF I go.

The first 7 casts came back with my gear covered in jelly fish, I had just commented to Andy that I was currently 7 for 7 on jellies when my gear got slammed............. Fish on, and a huge one at that.

I managed to fight it for about 30 secs, enough time to see it break the surface and whale tail back to the depths... I was letting it run out when my line suddenly snapped. I discovered my leader snapped at the mid way point. It wasn't a knot failure , it simply snapper in half........ Turns out in my haste to get out of town I had grabbed some leader from my steelhead back. some time ago I loaded a empty 20 spool w/ 10 lb leader. Having forgotten I'd done that and relying on " 20 lb label" the line was out classed by the huge nookie. When I got home later that night I confirmed, it was 10lb test on the 20 lb spool.......... Doah.

So last weekend I again headed to the coast determined to seek some redemption. This time I had the Double Lu in tow, fixin to get off the beach and onto the fish.

Of course I'd been warned time and time again "don't take a 16'er out on the lower Columbia" too dangerous....... Ptttttffff . Conditions were perfect

We launched on the Skipanon and headed out to do the green can run. The double Lu preformed perfectly. Granted we incurred several huge freighter wakes and the pull of the tides, all in all the DL working great.

On our second pass running with the incoming tide.... Boom fish on. 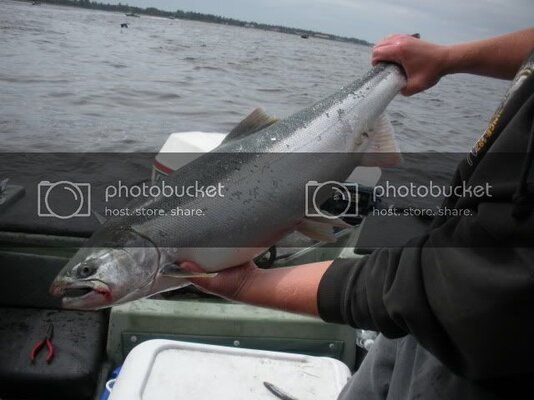 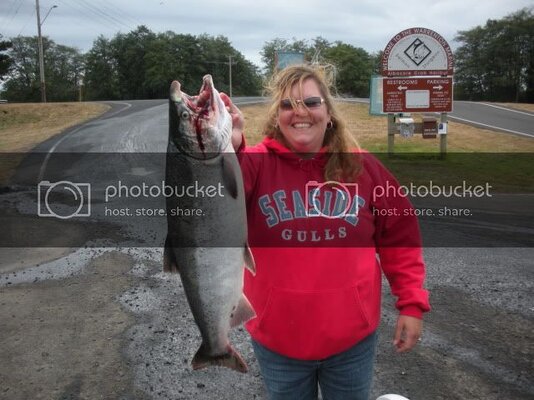 I'm leaving in 30 mins to spend the long weekend getting more blood in the boat. This is prob the last time I'll head so far west (until I get word fall fish have moved into a local coastal river I can't mention just yet)
M
Markcanby
Thats Great FF I glad you getting some fish. I know you had a slow time last year but it looks like you are making up for it now.
C
Coho Kid
I like your spinner collection. I make spinners myself and like to have "the color" when headed down to the river. The best part about spinners is the reaction they entice from these large predatory fish. That instinctive slamming strike that starts the fight is always pleasing when fishing spinners.
G
GraphiteZen

You did not even get my good side.

Anyhow its all for a good cause, No Harm. Nice fish BTW.

I aim to voutch for the no fish there....Dead Pools All Around. We have pulled two Nookes from there so far.

Hope they won't be much later. Course I have to work the weekends so it makes it that much more tiresome with no fish.

haha Very nice.
You must log in or register to reply here.