P
psguardian
We were going to target Fairview Lake, or the upper slough, but the canoe launch at the public park didn't really seem to be a good spot to set up 3 camp chairs & 2 restless youngsters. I ended up going further up Marine Dr to Chinook Landing. (If you're just going to the picnic area & beach do you need a pass? I paid the $5 just to cover my butt from the potential fines) We thought about walking the field to fish the beginnings of the slough, but decided to go for the Columbia side of the park instead.

We had been feeding the weed beds for about an hour & a half, I knew power bait wasn't the greatest choice for the area, but I wasn't about to put flies on a 3yr old & 6yr olds lines (the only other 'bait' I had with me). Then I realized I had brought a free gift with me... Last time I was on the Sandy I did some clean up work on my hike out. One thing I found at waters edge was a half gone bucket of 'super smelly catfish bait', why this was on the Sandy I'm not sure... I figured it would come in handy for slough or Sauvies Island fishing & I was on a cleaning spree after all so in the bag it went. I put a fresh ball of rainbow ribbon PB on her hook & dipped it in the catfish bait (man that stuff STINKS!!!). Next few minutes I noticed the tip of her hand-me-down Cars 24" button caster was wiggling out of beat to the waves lapping the shore line! I suggested she reel in her line, she did about half way & set it back down, the 6yr old was distracting her with rocky sand castle building a few feet away... I ushered her back & helped her finish reeling it in (I can cast a long way with 3/16oz lead & a 2ft stick). As I showed her she had caught something she jumped & squealed & laughed, the prev two fishing trips we had taken this year (skunk fests) were suddenly worth the hassle & disappointment & boredom! I held it up for the pic & she wrapped her wet hand around it, "I got a fish!" she says lol. My son then screams to the other few fisherman down the shore line at the day use area "we got a fish, we got a fish!" 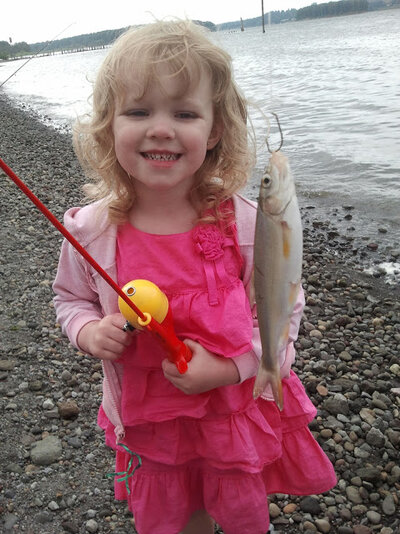 I'm not entirely sure what it is (I.D. it anyone?), but to her it was the entire reason we went to a river she couldn't throw rocks into.

It was about 5-6" long, & had orange/red fins. Got it right in the center of the upper lip, released in short order & it darted off back to the relative safety of the weed beds. The remainder of our 2.5hrs on the water were totally uneventful, but they are both hooked & want to go out again tomorrow! (I'm looking for a better place to take them, thinking maybe a trip to the mountain or the island... any suggestions)

Good job by you Dad.....:clap:
T
TTFishon
Nice job Dad!!! From this angle it looks like a pike minnow to me.
D
DYJ
Cute

and I'm gonna go with Pike Minnow also
Last edited: Sep 1, 2011
F
Fish-N-Chips
2 Cute I say that is a whitefish ore pike minnow:think: A smile that tells the story our little gifts from GOD are so precious. I remember my daughters first fish was a perch or trout and the fascination from her little mind was phenomenal. Good job:clap:
P
psguardian
Thanks everyone! We haven't gotten out of the house today, but I'm still trying. No $ left for parking passes so looking for something I can park & walk into with the kids. I'm thinking pike-minnow also after looking a few up.

I told them we would try to go fishing before picking mommy up from work & they lit up! Now to deliver... Anyone know an easy access spot in Fairview/Troutdale area?

~psguardian
S
sportsmanlio
That is most definitely a Peamouth; whitefish don't have the yellowish fins and the Northern Pikeminnow doesn't have such a deep fork in its tail.

If you can catch pikeminnow, though, it can be worth your while! Depending on where you catch them, you can make money for each pikeminnow you retain. The state subsidizes fisherman for removing these fish, which eat a tremendous ammount of salmon smolts. Catch a few of these, and you will pay for gas and the parking pass!
Last edited: Sep 1, 2011
P
psguardian
Hmmm There was a very distinct line of color boundary between the white belly & the silvery side/back. May well have been a Peamouth. I'll have to think about the pikeminnow hunting, would be nice to come back less poor then I went out lol.

~psguardian
U
usmc-recon
Memories that's what its about! To me looks like pike minnow. Just my. 02 I've caught bazillion of them if theirs only on in lake/river leave it to me to catch it lol.
D
Drew9870
Lio is spot on, Peamouth Chub, many people (not pointing fingers, I personally know many people) think just because it is silver and not a Trout, it is a Pikeminnow, we have around 100 (ok, closer to 60) species of fish in the Columbia and Willamette, some of which would almost require a biologist to tell the difference. Pikeminnow have a distinct 'V' shaped mouth from the side.

psguardian, bait the little ones up with whole kernel yellow corn, it catches a wide variety of species, also, imagine the look on their faces if one of them landed a 20lb Carp :shock:, priceless :lol:.
Last edited: Sep 1, 2011
U
usmc-recon
More than likely I'm wrong never fished Columbia so I'm just base my opinion off of Dexter lol guess I shouldn't comment if I don't know what I'm talking about. That's why you guys are here correct my ass lol
N
ninja2010

usmc-recon said:
More than likely I'm wrong never fished Columbia so I'm just base my opinion off of Dexter lol guess I shouldn't comment if I don't know what I'm talking about. That's why you guys are here correct my ass lol
Click to expand...


recon, drew knows his fish id... he's not calling you out.

personally, i think it's more admirable to comment - even though you might be wrong, and be willing to be corrected - than to never say anything while thinking you already know you're right no matter what anyone says...
D
Drew9870
Recon didn't mean any wrong, we are actually on good terms now.
P
psguardian

Drew9870 said:
...psguardian, bait the little ones up with whole kernel yellow corn, it catches a wide variety of species, also, imagine the look on their faces if one of them landed a 20lb Carp :shock:, priceless :lol:.
Click to expand...


OMG I missed this earlier lol. I don't think a carp taking their poorly attended pole into the river would do well for their mood. It is a great idea though. I will have to convince them to sit still a bit when we do corn. Hopefully next trip.

~psguardian
J
JB WI
I believe you have to sign up at a specific pikeminnow station on the day you plan to fish prior to fishing to get the bounty.
That being said, my kids love catching anything no matter what it is, so I imagine that fish was pretty much like striking gold...AWESOMEness!
P
psguardian
You're right, it's per site per day, sign up prior to fishing. I saw the sign up by the gate & skipped it, figured I wouldn't get much if anything lol.

We did get out for an hour today, bybee shore is muddy & weed ridden. They didn't want to play in the mud, so it was over quickly.

~psguardian
You must log in or register to reply here.