Went out to the Miami river today with amnis from this forum and a friend. We were targeting chum salmon mainly, but we knew there were some chinook in the river and the river was open for steelhead also. We got to the river about 6:45 AM, the sun was not visible but a little bit of light was creeping from the edge of the sky. We got out of the car, tied on our flies, and got into this beautiful, fast-flowing river and waded in. I had a nice pink woolly bugger on my tippet. I found a nice riffle and after a couple casts I heard some shouting and amnis has a fish. Amnis hooked a couple more in a short period of time then, but wasn't able to land any of them. (But he had one fish in his hands before it snapped OFF his fly . ) My friend Jered then hooked up with a nice chum and released it quickly. After a few more casts into the riffle, my line takes off and it is flying OFF of my reel. The fish jumps and does acrobatics in the air and I realized it was not a chum salmon or a chinook. A few more minutes passed and I was able to land the beauty of a steelhead. We weren't able to get a good shot of the fish because we wanted to release it as quick as possible, so I won't be posting a picture of this fish, sadly. (I did catch it, though, not lying, haha). After the surprising steelhead, we moved upriver and Jered hooked into a monster of a chum in this river. After a ten minute fight (not joking!) he landed a chum on his 6 wt that was probably 15-20 lbs with some big shoulders. We fished a little more and hooked up with about fifteen more chums. Overall, it was a great day on the Miami river, with a steelhead and tons of chum salmon. BTW-ALL FISH WERE RELEASED UNHARMED! Here's a pic of Jered's fish: 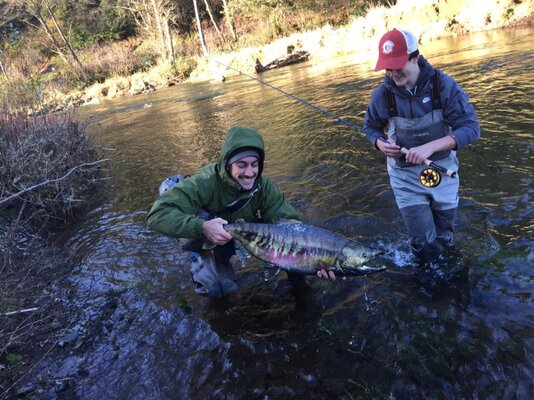 Jered and amnis in this photo (Jered holding the fish). Some of the fish in the Miami were pretty spawned out, and I can see why the season closes in a few days. Overall, great day out on the water!
B

Always love the colors and markings on Chum. Next time I get out and catch some I plan to start getting pictures and collecting them and checking out the different patterning.
T

Moderator
What a great trip!

I always liked the look and life history strategy of Chums.

Nice report. I've never fished the miami, but I do love the kilchis, so maybe I should give the miami a try too!
S

Nice work. Those big buck chums can abuse both you and your gear.

Most Featured
Great report. Sounds like a fantastic day.

S
Is steelhead fishing all about knowing where they are?