From the Marion County Sheriff's Office...

In the days following the fires that led to evacuation of the Santiam Canyon, as a community, we began to take inventory of the many challenges that lay ahead. While fire operations, road crews, tree clearing operations, and utility work was underway, Marine Patrol Deputy Garrett Olson had visual confirmation that both Detroit Lake Marina and Kane’s Marina were destroyed. He knew that a plan to get boats out of the water was another major task among a growing list of high priority needs due to water levels in Detroit Lake. “The reservoir generally drops around 12” per day this time of year”, Deputy Olson said. He worked with the U.S. Army Corps of Engineers and county leaders to withhold the flow rate of the reservoir to keep the water levels as high as possible. This was done to afford extra time to get the boats out and to mitigate environmental impacts.

Deputy Olson started formulating a plan to get all the boats out of Detroit Lake as soon as it was safe to do so. This involved a massive communication effort to almost 250 owners who still had boats on the water. With the help of Deputy Kayla Thompson, with Search and Rescue, Deputy Olson read through hundreds of emails and created spreadsheets to track slip owners in the marina.

While the plan was being developed, Deputy Olson went around to every boat and lifted their outboard motors in case water levels dropped to unsafe levels in hopes of minimizing damage. Deputy Olson reached out to the owners of Kane’s Marina, Detroit Lake Marina, STR Towing, Ryan Valentine from MV Detail, Dave Power from Dave Power Automotive and Marine, Dennis’ Boat Shop, and Vince Castronovo to arrange extra trailers, storage and boat mechanics to assist in the removal operation.

On September 12th, Deputy Olson moved over 30 boats across the water from the Detroit Lake Marina to Kane’s Marina to help afford extra time for boat removal. There is a number of safety and environmental reasons to get the boats out of the water before levels drop down so low that they sit on the lake bed. First and foremost, boats can and do breakaway and could be carried down to the Detroit Dam causing blockage issues. There are a number of different fluids within a boat, oil, gas, and battery acid that could potentially be leaked into the waterway if the boat sat all winter long.

As the days went on, fire, weather, and water levels were closely monitored for the right window to make this removal possible. Finally, on September 20, 2020 conditions were right for the safe removal of boats from Kane’s Marina. Mongold Day Use Area Boat Ramp and Detroit Lake State Park Boat Ramp were utilized due to easy access for groups of owners and conditions. Boat owners were instructed to stage in groups of 15 at Hwy 22 @ Gates Hill Rd. From here, an O.D.O.T. pilot car, several Sheriffs’ Office vehicles along with Marion County Search and Rescue Jeep Patrol, and the U.S. Forest Service Law Enforcement escorted owners up Hwy 22 to their assigned boat ramps.

All boat owners were required to sign a waiver due to them entering a Level 3 evacuation area that is still prone to falling rocks and trees. The owners would board one of the pontoon boats from the marina and be given a ride over to Kane’s Marina to retrieve their vessel.

Did they get all of them out?

Gulfstream said:
Did they get all of them out?
Click to expand...

Only those involved in the effort to get them out would know the answer.

Gulfstream said:
Did they get all of them out?
Click to expand...

Weird that they give a report but don't say how many were removed or where they stand in the effort.
Last edited: Sep 22, 2020
G

I have never been there, but it sounds like an environmental nightmare waiting to happen if they don't

Found this video. It says "Most if not all the bots were removed".

Statesman Journal was there and reports that 250 boats were removed...here's a link to some pics: 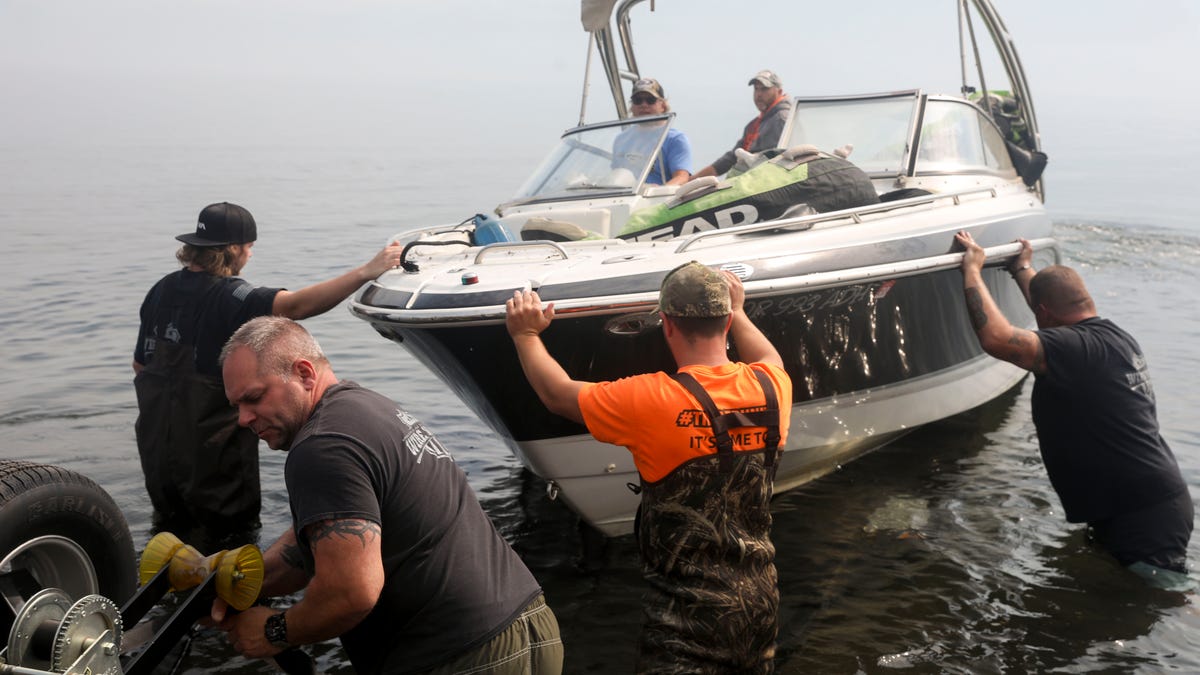 With Detroit still under an evacuation order, volunteers and Marion County Sheriff's deputies work to remove 250 boats from Detroit Lake.

Gulfstream said:
I have never been there, but it sounds like an environmental nightmare waiting to happen if they don't
Click to expand...

That's what I gathered as well. NOT a good scenario!
You must log in or register to reply here.