M
mlw
Took my driftboat that I have been building from scratch out for it's maiden voyage Saturday, drifting the Mckenzie from Armitage down to the Willamette. It is based on the Trapper from Roger Fletcher's book "Drift boats and River Dories, stretched 6" (12' long overall). The original was built in the 30's for Prince Helfrich to run trap lines in the off season from guiding (nov-mar), from Vida to Peoria on the Willamette.
The seats, flydeck, etc are of my own devising.
Michael 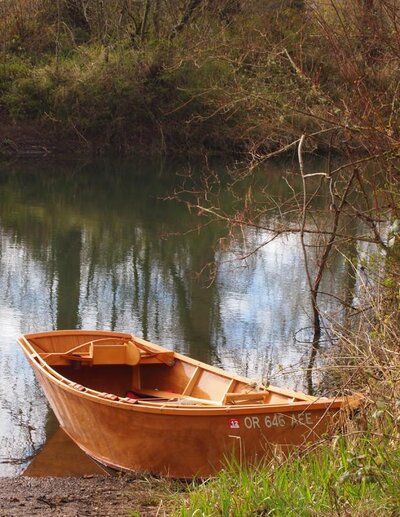 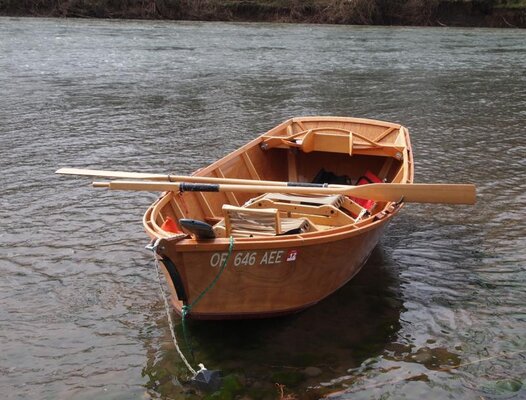 Building a driftboat is something I would love to do, but don't have the time, space, and most importantly, the "skills"

Irishrover
Michael you are an artist! Nice boat. I like that anchor set up.
H
Hawk
You did a very Beautiful job, Bro.:clap::clap::clap:

One time i made a breakfast nook in mill & cabinet shop, that looked like it had the same wood grain. It was made of Birch, lumber core 3/4" ply.:lol::lol:
N
nwkiller
wow, that is beauty!!!!!!
T
TTFishon
Sweet!!! How was the float?
G
GungasUncle
Just curious - is this boat meant for running with the transom pointed downstream? I ask because it looks like the leg braces, and passenger seats face rearward, and you've got the anchor run off the bow - which is a little unusual for a drifter. Gorgeous boat. I love wooden boats. How'd she handle?
E
eggs
Damn that is a beautiful boat.. well done!
M
mlw
re float: nice most of the time (caught some rain/hail). River was a bit high, keep an eye out for trees/debris in the river. Quite a few march browns out, but the trout weren't looking up. My friend got a nice fish on a posse bugger, we each had a few ldr's. Ramp at crossroads (Christensen Landing) has quite a bit of debris at the entrance - lower water or deeper drafting boats may be better off at Hayes lane across the river.

GungasUncle - Yes, for drifting it runs transom downstream. I added a removable transom piece to accommodate an electric motor for stillwater/tidewater use, in which case it will run bow forward (haven't tried that yet- have to save my pennies for a while). The seat backs are reversable, removable or stow inverted The anchor system worked fine - never quite sure until you try it. Drifting it handled well - didn't push water, rowed easy.

Michael
G
GungasUncle
Sweet I kind of figured it was something along those lines. I've been looking at boat building websites for a couple years (I want to build myself a drifter or a scaled down pacific power dory if I ever get the funds at the same time I have the time). I've noticed that a few drift boat builders have started putting out white water skiffs - that have a wider "bow" and a narrow "transom" (would totally work as a standard boat if you put the motor on the wide end and called that the transom) - so I thought that's something similar to how you were setup. Neat idea with the reversible seats.

Really cool boat, Michael
A
Amberjack
Nice job, must be some pride in the build/actually float... Beautiful boat.
G
gonagin
Does your wife know you've been tossing her fine furniture in the river to go fishing? I'm getting ready to build a heavy "sharpie" and you've given me inspiration and a lot of good ideas. One of the nicest boats I've ever seen. Kudos to you sir!!! Well done.
Last edited: Jul 12, 2011
G
GDBrown
You have done a remarkable job with the boat you have built! I love the look of wood that has a natural finish to it. I rebuilt a fiberglass drifter by replacing all the bright work on it and know the satisfaction it brings. I was so disappointed after I sold it I bought another drift boat. Both are in the 12 ft class.