bass
I hit the lower Willamette River this past Saturday (day before Cinco de Mayo) with the plan being to split the day between sturgeon and bass. I was anchored up and fishing by 7:00am. I felt I had anchored up in the perfect spot where I was sitting right on the edge of an eddy. I figured the fish would be stacked up right along the current seam. After a ½ hour of no action I realized my original idea was wrong, but I decided to toss into the middle of the eddy before giving up on the spot.

That was a good decision. Within a minute of my anchovy hitting the bottom I felt that familiar tap, tap, tap. I started reeling hard to set the circle hook and I knew I had a good fish on! I was using a new Okuma rod with my Shimano Cardiff 400 reel. The drag was peeling and the rod was doing its job. 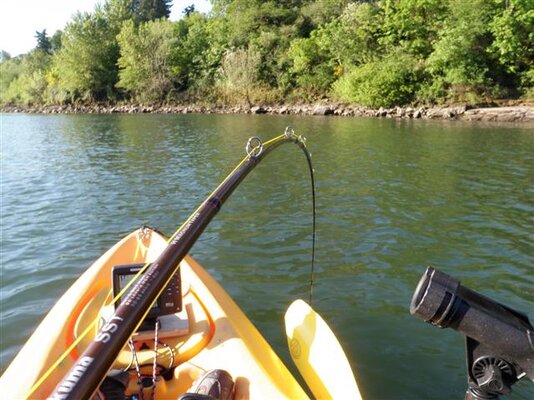 After a good battle I was able to wrestle this nice keeper sized up to the kayak. 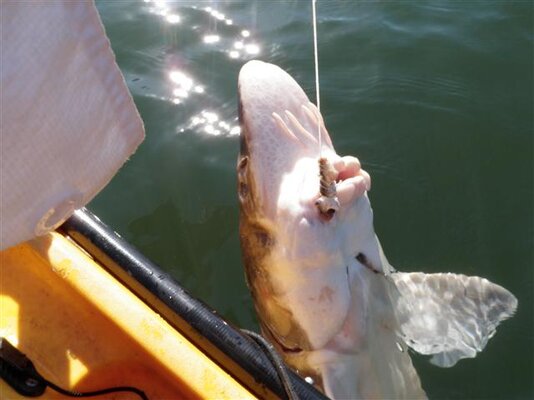 I cast back out again and in very short order I had another great fighter on. Man those fish fought like demons on Sunday! After about a 10 minute battle I was able to bring the fish alongside the kayak. This fish looked to about 5’, maybe an inch or two less. 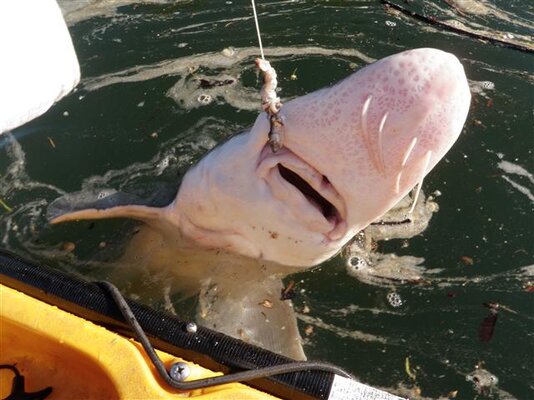 I tossed back out and wham, another big fish on! I was leaning on that rod hard, keeping as much pressure as I could on that fish. 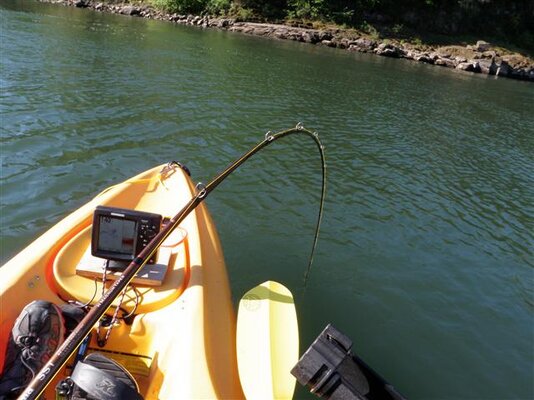 I knew this was a huge fish. After about 15 minutes I finally got the fish moving off the bottom, I see bubbles, I am feeling good when all of a sudden that fish makes a tremendous power dive, the drag is screaming as it dives for the bottom. I give everything I have got to try and stop the fish. I am pushing hard on the reel handle when disaster hits. The gears start slipping on the reel. Here is what happened: 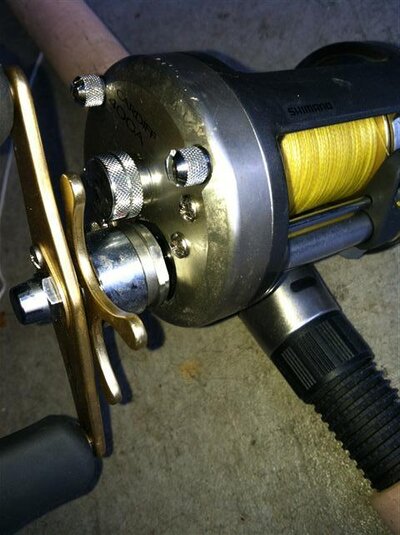 The handle assembly pulled out of the reel! I have not taken the reel apart to see what happened. I am guessing a retaining clip broke. Well, I still have the fish on. So I fight it in by using my thumb to hold the spool while I pump the fish up. On the drop I push the reel handle against the side plate to get it to catch just enough to wind in the low tension line. After what seemed like an eternity I get the fish back to the surface. It is about a 5.5’ fish. With the broken reel it is all I can do to get it unhooked.

I look at my destroyed reel and sigh. I pedal over and take my wounded warrior up to the truck. Fortunately I had brought my Tiger Stik/Saltist combo for backup. I get the big rod out and I am ready for revenge. 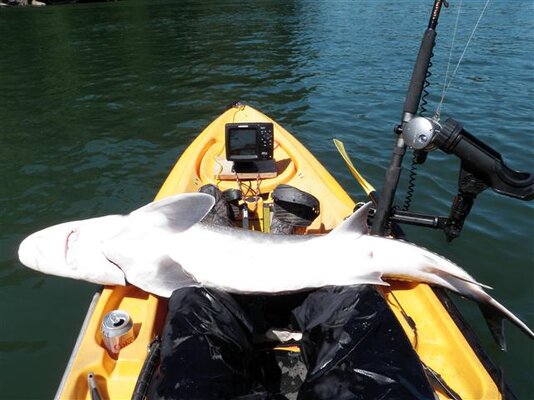 I was having a great day and I did could not imagine it getting better. I tightened up on another fish and I was immediately hammered with a series of monstrous head shakes and then that fish took off like a rocket. 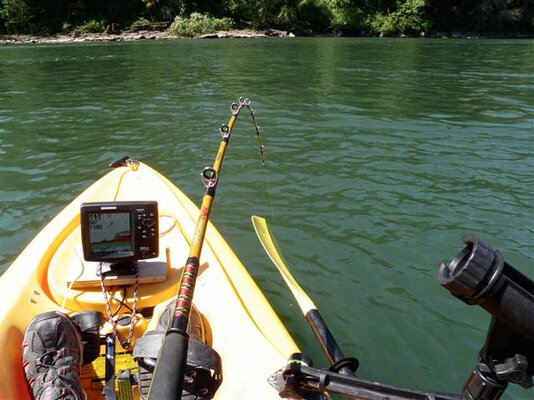 Each time I got over top of the fish and started to lift it would respond with a long sizzling run. (I know it is weird to use sizzling run for sturgeon, but this was one hot fish). Finally, after a hard 20 minute battle I was able to get the fish to the side of the kayak. Thanks to a fellow name Jeff for stopping on his jet ski to watch the battle and take a picture. He said that for a while he thought I was just hung on the bottom. This picture is deceptive, the fish looks small here due to the angle, but based upon my reach measurement it was about 6’ long and had the ugliest and most beat up lip I have seen on a sturgeon. 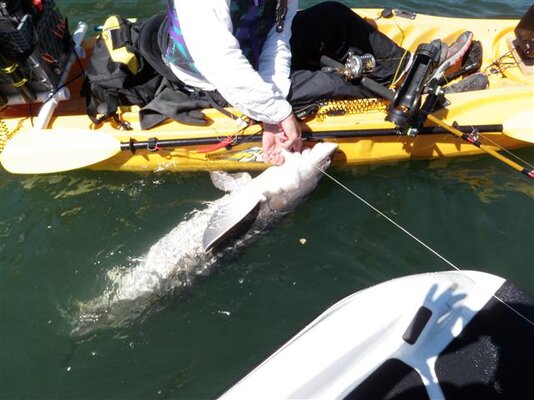 The good bite lasted until almost noon. I was really surprised since the outgoing ended around 10am. After the bite had slowed down (it never stopped completely) I got to chat with some nice guys in a boat who anchored up nearby. I lowered my last anchovy down and it soaked for a while when a fish just picked it up and swam off. No nibbling, no messing around. I tightened up on the fish and it was not happy. I felt some massive head shakes and then it took off. I clamped down and the line snapped. I had noticed the line was a little frayed after the previous fish, but I was lazy and did not re-tie since it was my last bait. I paid the price with the loss of a big fish.
So between 7am and 1pm I landed 15 sturgeon: 3 oversized, 10 in the slot and two good sized shakers. The smallest fish I caught all day was well over 30”, many of the keepers were towards the upper end of the slot. When I pulled up anchor at 1pm I was pretty tired (and was sore the next day).
I decided that since it was early I would give the smallmouth a try. The wind made the fishing tough and I fished from about 1pm-5:30pm and only caught one little one for all that effort. 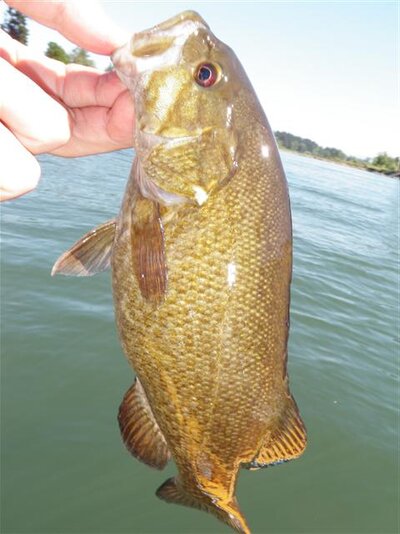 Still, I left the river completely satisfied. I did not realize how tired I was until I pulled my loaded kayak up the ramp. I was exhausted, but I just could not stop grinning like an idiot the whole drive home.
Last edited: May 7, 2013

jamisonace
What an awesome report. My boys are still begging me to get them up there for some of that action. I need to commit a weekend to sturgeon! Thanks for keeping the interest level high!!!

Casting Call
Ditto! Ditto! :clap: Did you remember how to make them change directions? CC
B
Big3d
Nice day out, Wish i had your luck! Remember to retie your lines!
W
waco
aewsome report as usual!!! thanks for sharing those great pics!!!
O
OnTheDrop

jamisonace said:
What an awesome report. My boys are still begging me to get them up there for some of that action. I need to commit a weekend to sturgeon! Thanks for keeping the interest level high!!!
Click to expand...

If you make it up that way head below the falls about a 1/4 mile ( In front of the "Wall" that people use to fish off ). Not only will you have a sturgeon messing with your bait all day, but you have an opportunity at some of the biggest the Willy has to offer. Biggest I've heard of is 14' in that area but there is plenty in the 5-10ft range. Especially with these shad coming in...Tie one of those bad boys on!
O
OnTheDrop
Woops, where are my manners.

Excellent report! Absolutely awesome day out there! Thanks for sharing..

You ever troll for springers in that thing? Would be fun!

CC, yes I did a better job of getting a head of them and keeping them in a much smaller area. When it is not crowded I love the sleigh ride, but on the busy river it is nice to have more control. Thanks!

SteelmonKiller20, no need to apologize about sharing information, that is what makes this forum great!

I only trolled for springers one time for a couple of hours. I found it pretty boring. Springer fishing has a pretty low probability of success for the best of anglers, much less a novice. I bring salmon gear in the truck, but it just sits there. My idea is that if I see fish rolling when I go to launch or I see (or hear about) a good bite I will take it out with me. Given the run this year it just sits in the truck
R
radiation
That was one of the best reports i've read in awhile. That is one fish that I have yet to fish for. After reading your report, I really need to look into this. Thanks for peeking my interest.

bass
That was a really great day. It has seemed to me that the sturgeon fishing has seemed this year than last. I am not sure if it is that the winter was milder or if I am figuring it out better. In either case, it is a good time to go out there and chase them. The fishing in the Willamette slows down some time in June and stays slow for a couple of months. Fortunately, the bass fishing is excellent during that period. Gotta love living around here!
You must log in or register to reply here.