Has anyone heard of these?

At Mt. Lassen a hatchery worker discovered a male rainbow trout with vertical stripes and golden appearance. Apparently, according to the scientists, a recessive gene became dominant in this individual and produced the golden hue.

They bred the male with hundreds of normal female rainbows hoping that one or more of the females also possessed the same recessive gene for the golden appearance.

They got lucky and found a few of these females with the gene.
Approximately 25% of their total offspring showed the golden coloration of the new trout. They were separated and selectively bred with one to the other.

After several generations of selective breeding all of the offspring are 100percent golden in color.....

The Lightning Trout is born. 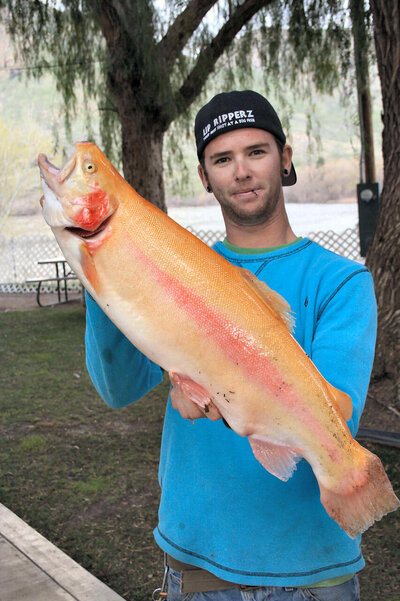 YouTube video of the 1st ever Lightning Trout stocking

Do we really need these Scientists with their crazy ideas messing with our Trout? Trying all these new hybrid/genetically created species? I say no and I just don't like it. Leave nature alone.

Yah. What God made don't mess around with it. However, that fish, in color, looks a lot like the high altitude Golden Trout, which like lakes at 6000 feet or higher. Park Lake on the upper slopes on Mt, Jefferson has Golden Trout in it. Makes you wonder, though. Osprey and Eagles might be able to see a trout of that coloration better than other fish. Unless Osprey and Eagles don't see in color. If they don't then the fish might appear as a brighter white, maybe?
T

Yeah was gonna say something about them looking a lot like golden trout. Also where to we get trucks that stock that many trout that size? are normal pellt heads are 8-12" and then we get 14" and then i think the trophy trout the stock ar 16" then you get the brooders they stock but never do you see trucks stocking trout that size tose looked to be 2-3 lbers average with some even bigger. I guess this could actually randomly happen in nature jsut the odds are very rare.
M

The correct terminology for the "lightning trout" would be leucistic. http://en.wikipedia.org/wiki/Leucism What a stupid name. "Lightning trout".

They occur in the wild much more often than you'd think, but most don't make it to breeding age due to being a bit more visible than normal to say the least.

AtmosphericWrath said:
Has anyone heard of these?
Click to expand...

These are not GMO. They are bred for characteristics NOT Genetically Altered!
You must log in or register to reply here.