S
Spydeyrch
Sorry buys about this late report. Especially sorry to Brandon because I imagine that he has been waiting for this to get posted. I have had just a TON of things going on since we went fishing and I have had hardly any time to even eat!! Ok, that is a little of an exaggeration, but it gets the point across. But here it (finally) is. This is our report from our 07/02/2011 fishing trip.

I met up with Brandon and picked him up quite early, probably around 5:30am, if I remember correctly. We hoped in to my van and shot off to our fishing spot. We were going to hike in this day. We parked my van, secured everything up and started off on the hike. Interestingly though, as we were gathering up our gear, I spotted this HUGE great blue heron flying overhead. It looked like it was carrying something in it's mouth and it was going extremely fast! It seemed unusual to me. But then a second bird came flying up behind it. It turned out that the second bird was actually a bald eagle!! Beautiful bird!! What a way to start the day! Sweet!!!

So, we started hiking up the road to where we were going to start fishing. As we were hiking brandon spotted something in the water swimming along. It was a beaver!! No joke!! It wasn't a nutria or a muskrat. It was an adult beaver. Flat tail and everything!! It was brandon's first time seeing a beaver in the wild. It and was my first time seeing one in a creek such as the one that we were going to fish. It was pretty sweet though.

After about two miles of hiking, we hiked down off the road and to the stream. It was beautiful!! The sun was out the birds were singing, and holy cow batman, there were midges EVERYWHERE!!!! I mean, the water was thick with the little guys flying above the water surface!!! You could grab a handful of them!! CRAZY!!!

Anywho, we fished the stream from that point upstream. We nymphed and fished some dries too. Brandon caught one on the dry fly but all others were on the nymphs. I had just gotten a new 3wt 7' rod and I was loving it. Plus I had gotten about 70 new flies and was itching to try them out. The fish that I caught really seemed to hone in on the micro disco midge nymph that I was using. It was sweet. but they really tore that sucker up. At the end of the day, it was just a bare size 26 hook. hahahaha

Some of the highlights of the trip. We fished from 7am to 7pm, twelve hours. We covered a total of about 10 or 11 miles hiking, round-trip. We caught 27 trout, all cuts and bows. All wild. The biggest fish was brandon's It was the last fish of the day and it was a fighter!! It was soooo cool to see him catch that thing. It was 16 inches and at least 2lbs!! He caught 19 fish and I caught 8. I was soooo tired by the end of the day.

There was this one hole that was just amazing!!! It was actually our starting hole. We started there, then went up stream, then came back down to it, then went down stream, then back up to it, then home. We pulled a total of 10 or 11 different fish out of there!! And the biggest one came from there too!!! It was soooo sweet because this hole was like only maybe 6 feet across and the run was for maybe like 12 - 15 feet long. But the fish were just stacked up in there!!!

One other thing was this one hole that I hit. I cast in there, and BAM!!! Fish on. But then he got lose. But I saw him and he was big! So I cast again, and BAM!!! Fish on!!! Had to be the same fish because it was about the same size!! But he got off, again!! So I cast again, and BAM!! Fish on!! Same fish, same size, off again!!!! NOOOOOOOOO So I said a little prayer (not really)ray: and cast again. BAM!!!! FISH ON!!! Same one again!! And this time I landed him. He was a beauty and a PR for me for wild small stream trout. I think it was either 12 or 13 inches. Beautiful fish.

We also found and caught a, correct me if I am wrong brandon, Oregon orange headed racer (???). It was pretty neat that I spotted it among the bushes and that brandon caught it.

I hope I am not leaving anything out. Feel free to ad some brandon if you would like too.

Below are the pics. Enjoy!! 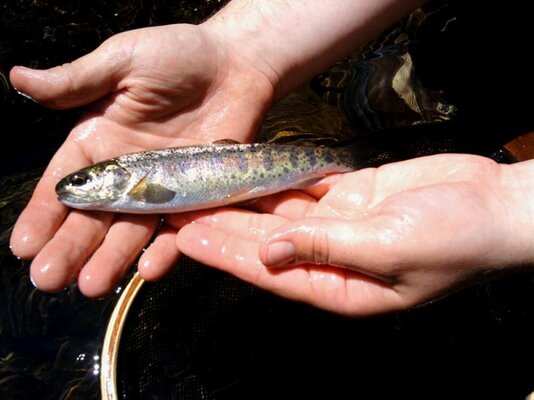 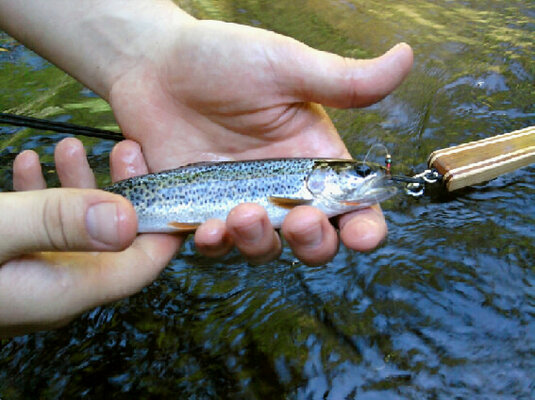 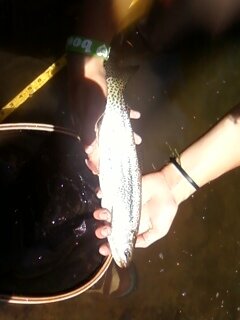 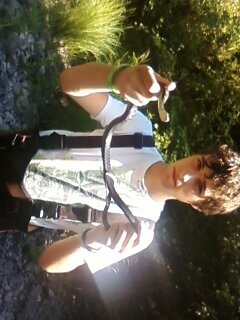 This is the Oregon Orange Headed Race that we caught. 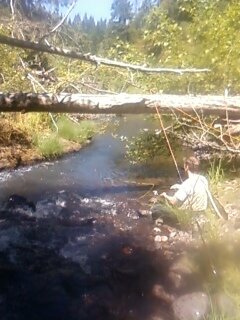 That is me sitting down. I was so tired but couldn't pass up that run. hahaha 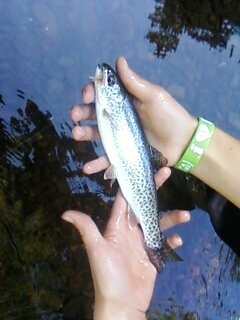 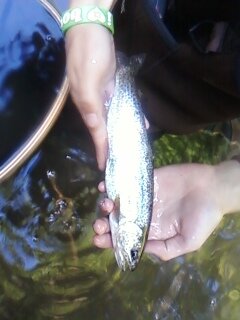 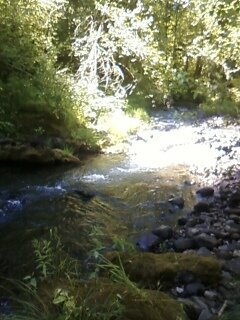 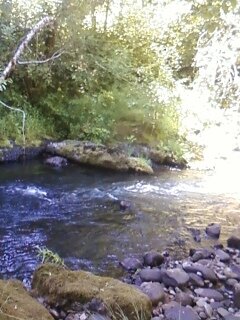 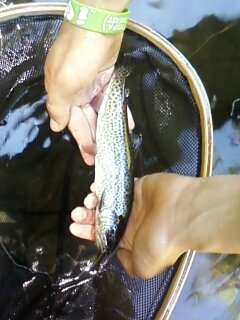 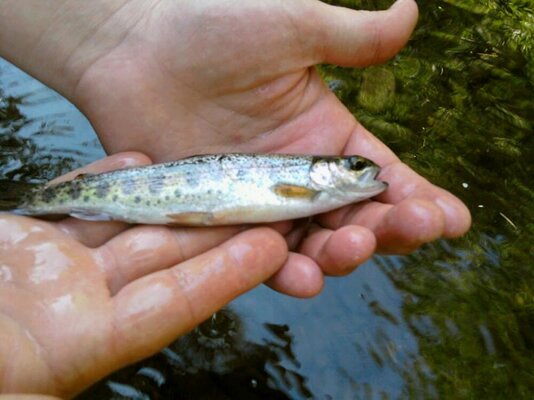 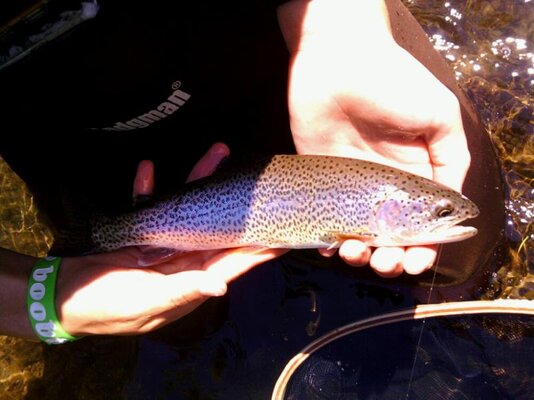 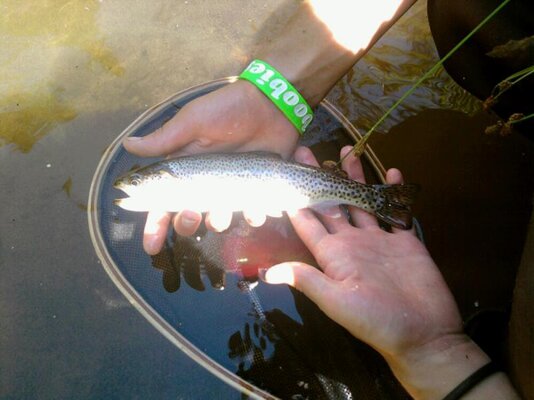 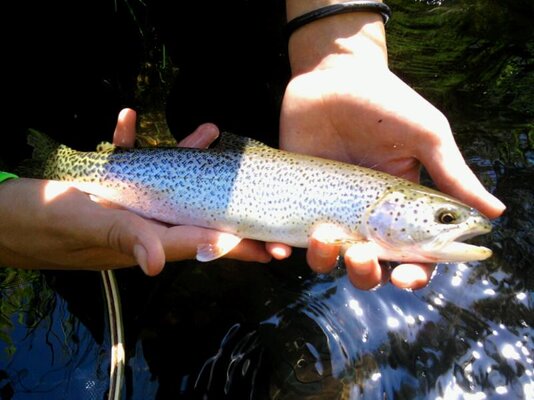 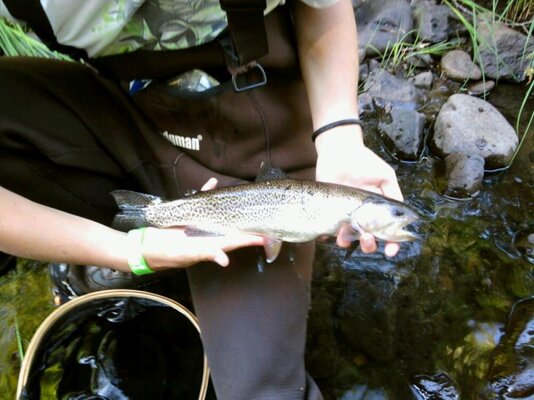 This was the last one of the day and the biggest one. It was about 2lbs and around 16 inches!!
E
eggs
Very cool man! I have been google mapping some hike in(I think) costal creeks/tribs that look remote and productive! I want to find my very own gem much like that one you guys hit!

Ohh and welcome to the awesome 3wt world... everyone else is just missing out on how much funner fly fishing can be on a 3wt.. until I got one I didn't even think it was possible!
L
lilsalmon
good job guys.....sounds like you had a full day and fish caught along with it....yay!!!!!

brandon4455
thanks again for coming out. It was an awesome trip and i look forward to doing it again. plenty of sizeable fish on that trip. good to see the trout thriving

I'm glad to see that "crick" is full of fish too.
B
bigsteel
excellent job fellas
S
Sinkline
Good story Spydey! Congrats to both of you, those are some beautiful wild fish!


Randy
M
mahmichael
I loved the way you wrote the story :lol:
I'll have a trip like that soon, I know it!

B
Excuse my ignorance but what is a steelhead?