Started catching bass in numbers about a week and a half ago and it definitely hasn't slowed down. Have been catching mostly smallies at my usual spot; The largemouth usually don't start coming in until the water drops a little more and it warms up - I have caught a few of them though! Biggest one I caught was probably the one in the blurry pic. Sorry about the long arm but it was a snapshot of a video! A big pike minnow is in the mix as well. I started using an ultralight with the plastics I have been throwing and it makes the fight 10x more fun. :lol:

Nice smallies in the mix. I need to catch some! I love those silly things all to pieces.

I always fish ultralight, except when I use topwater frogs on weed lines. Much funner than just hauling the fish out. I fished the willy on saturday and caught 2 largemouth about 1 lb each, and 4 smallmouths the smallest weighed 1.5 and the biggest was 3.7 lb. I fished that place for over 4 years and never caught largemouth only smallmouth weird. In my opinion smallmouth fight harder than largemouths. For largemouth I use topwater frogs and spinnerbaits and for smallies 3-4 inch senkos and mepps spinners.
S

Willerman said:
... I started using an ultralight with the plastics I have been throwing and it makes the fight 10x more fun. :lol:
Click to expand...

Yeah, it's all fun and games till a serious fish breaks your heart. Trust me, it happens. That's why I put that light stuff aside except for specifically targeting panfish. Not trying to persuade anyone, just telling it like it is.

Oh I feel you. That big pike minnow made me question the durability of the rod for the 2 seconds it fought before it played dead. I do try to put the plastics on the bottom for the most part but sometimes they like it fast across the top half of the water. It honestly depends on their mood sometimes it feels like lol. When I'm on the bottom with the ultra light I don't have too much to worry about in terms of snagging, I'm pretty fortunate that there is not too many logs or big boulders to snag on at my usual spot. I have my other rod that I throw the crank baits and big jigs with, though. Mainly just using tubes and grubs with the ultralight (which is what they are going after right now). When I snap it on a pig I will be sure to post so you can say "I told ya so"
S

Quick story... I was fishing at a private bass lake in Texas some years ago with a family friend who had a membership out there. I was fishing eight pound line, thinking I was cool, and really catching some bass. The guy I was with was catching a few, but I was getting a ton of them. Lots in the three to five pound class.

Then I hooked something better. It bit out on the end of a gently sloping point, and started slowly and inexorably swimming towards a laydown about thirty yards away. I was shouting "Do Something! Do something!" like a complete idiot at the guy driving the boat. I knew the outcome if that fish made it to the tree.

Long story short, I made a last-ditch effort to turn the fish. I clamped down on the spool and leaned to the side, trying to get the fish to change direction.

Do you remember the first time you were up close to a really big animal, the sense of how insanely, impossibly big the head on, say, a buffalo is? Well, I guess the change in pressure on my line was enough to get the fish to come up, because a bass came to the surface and tried to jump. It just sort of wallowed there, shaking it's massive head back and forth, looking like all the ancient ages of the forgotten dawn of man come back to terrorize me, wrapped in the flesh of a primordial fish. Way, WAY bigger than a ten pounder. Better than three quarters of the way to twenty would be my guess. I can't say exactly, because that was the only look I ever got at the thing. It sounded, pushing a surge of water in front of it like a beaver, and swam right into that tree. I could feel it moving around for a minute, then it was gone. I laid down in the bottom of the boat and just sort of... checked out. I don't remember anything about the rest of the day, I don't remember getting back to the dock or the drive back to town. I do remember the thought that I was never, ever going to make the mistake of bringing a knife to a gunfight again, though. I wouldn't even touch a spinning rod for ten years after that incident.

Great story! That almost happened to me yesterday right in town (not nearly as big, obviously).. but i managed to drag her in! 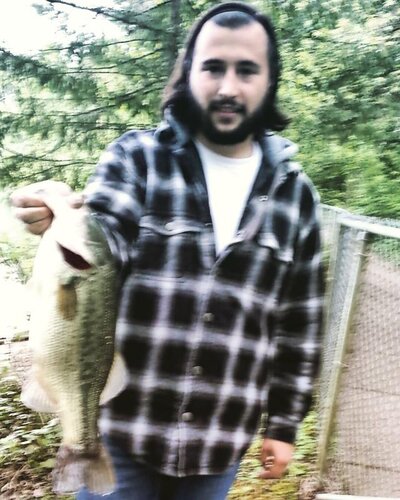 Hoo! That's a good one. Don't let those rats get you down in there!
W

Shaun Solomon said:
Hoo! That's a good one. Don't let those rats get you down in there!
Click to expand...

Are you referring to certain people at that spot? Or are you being literal in that there are actually rats there? :yikes:
S

Well, both, I guess. But I was talking about the nutria, which are not really scary unless you have a "thing" about 30 pound rodents.

Most Featured
Nice fish!
You must log in or register to reply here.