Is steelhead fishing all about knowing where they are?

S
SWriverstone
I'm a beginner flyfisherman hoping to (someday) hook into a steelhead (much less actually land one!). I've spent many hours this summer on the North Umpqua (in the fly-only section)...and am starting to wonder if steelhead fishing is really all about knowing where the holding spots are?

I ask this because from all that I've seen (e.g. watching other people in real life and in videos) the actual techniques for flyfishing for steelhead are not complicated. Down-and-across casting is pretty basic (I've been flyfishing for decades for other fish). And yes, I also know that steelhead are called "the fish of a thousand casts." It's also pretty apparent (though I know it sounds sacrilegious) that flies don't make THAT much difference (because people have landed steelhead on LOTS of different sizes, types, and colors of flies).

But increasingly, after throwing easily a thousand casts and not once hooked into a steelie (and I've been doing it at the right time of year and during early AM and evening PM hours)...I'm starting to think that the folks who catch them succeed because they know exactly where they've been caught before—and if we assume that steelhead prefer to use the same good holding spots repeatedly, it makes sense that if you hook one in a given spot once, you'll find more in the exact same spot at other times.

And it also makes sense that everyone says "hire a guide." Seems like what you're really paying for is not so much technique or fly selection, but just being told where the holding spots are.

Thanks!
Scott in Eugene

Haha thanks Tony (I think? LOL). Really my question hinges on steelhead behavior—do they ALWAYS go to the exact same holding spots? And are there really so few holding spots in a given river suitable for a steelie's picky tastes that if you don't know those few spots you'll never find one? (Seems to me like a river such as the North Umpqua must have about 800 ideal holding spots over miles of river.)

And to think of it differently, if I'm a guide and I know exactly where all the fish will be holding and I catch them there all the time...that's what I call "boring fishing." LOL I've been in that situation with smallmouth—where I knew all the primo spots and I caught 'em so often (in those identical spots) it got old. (I know—you're gonna tell me that catching steelhead NEVER gets old, LOL.)

I'd like to think that the steelhead mix it up enough that even the hardcore guides (receiving piles of well-earned cash for their time) routinely get skunked and can't put a client on a fish.

Casting Call
You are half right. Some holes stay the same with a slight difference in holding conditions. Steelhd. are creatures of habit to conditions. Learning those conditions is the key. Learning to spot them takes experience. That's what Guides have. Let's not forget the timing of the runs, if the fish aren't there, The fish aren't there. Ever see a guide advertize to take customers out when a run is not on? Tony

Chromatose
Congratulations SW in your quest to catch a Steelhead with a bug wand. You have chosen a tool that is one of the toughest to use to catch Steelhead, even before you know how to read water.

There is a learning curve here, and one that gets even larger when you add a bug wand into the equation. Tony is correct in his pointing you to a Guide. A Guide will cut the learning curve down quite a bit. Figure in the cost of trips you will take on your own only to get Skunked, which will be many by the way. Then figure in the cost of a one day excursion with a guide who will not only put you on fish, but will teach you the in and outs of Catching, not just fishing. It is a Win Win IMO.

Yes there are those times when the dreaded smell of Skunk will happen, but!? A well rounded guide will usually give you another trip at a discounted price. That is another opportunity for you to learn even more & maybe even do some Catching!

Look in this Web site as there is a well written about guide here.

If your dead set on teaching yourself, teach yourself how to read water!!!

Remember this SW,
Steelhead are opportunistic. They exert as little energy as possible.

Tight Lines and Good Luck to you.
N
newfydog
I went to a popular area last year on a really slow day. I only saw one fish caught, and by good luck, it was mine. I came home and talked to friend who knows the area well. He was able to guess exactly where I hooked it.

Aervax
I bet he guessed that you hooked it in the mouth?
S
SWriverstone
Thanks for the advice Chromatose. I'd like to think I'm already pretty good at reading water—because I've been an expert whitewater kayaker for decades and spent thousands of hours on swift-flowing rivers. Believe it or not, many of the same features fish seek in rivers are identical for whitewater kayakers–e.g. we use eddies as resting places (behind rocks and pourovers) and we enjoy places where the current is slow enough we don't have to kill ourselves paddling against it. Good whitewater paddlers also spend as much time paddling upstream as down–we use eddies, pourovers, and the like as stepping stones to hop up rapids, very much the same way that fish do.

That said, I don't claim to know exactly where steelhead like to hold, only that I can tell what's going on beneath the water's surface by looking at what it's doing on the surface.

In truth I don't mind being skunked—because it's always a joy being out on the river...and I'm learning to spey/Skagit cast, so it's great just to practice that. (And on the North Umpqua, I've caught many nice trout so don't always have a fishless day.)

But sure, I'm also not opposed to paying a guide. I just prefer to believe that it's possible to learn how to catch steelhead just by being patient and observant—and keeping at it.

Chromatose
SW, it seems you have a handle on the water with your Kayaking experience. Those are your Feeeshy areas. Hit em and move on.


Covering as much water as possible raises the chances of stumbling into a Pod. 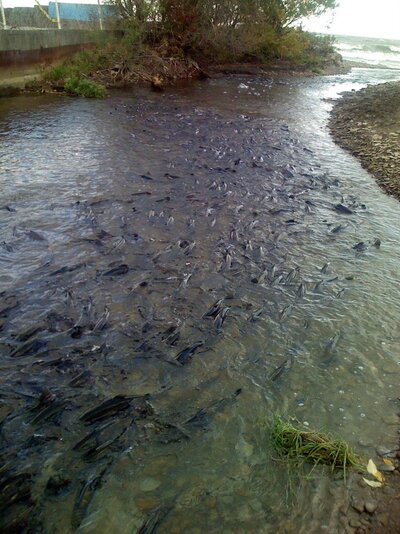 I never tire of an opportunity to post this photo.