S
Spydeyrch
Modest_Man and I hit a coastal stream that I previously fish about 2 weeks ago for the first time. So this was my second time there. The water was lower than last time. We met up and took off hiking. We hiked further than the last time. I think we hiked about 2 miles or just a little more, to get to the water. Then from there, we went down stream a smige. MM (Modest_Man) started out with a dry fly while I started with a nymphing rig. He started out catching some really small fish. I caught a few on the nymphs and he switched over to a nymph setup. He caught one or two but then switched back to a dry fly setup because all the fish were hitting his indicator instead of his nymphs. And good thing he did!! He just started nailing them with the red stimulator that he was using!! Just nailing them!!!

So I followed suit and switched to a few different dries. We were just catching them left and right. Literally!! He was on the left side and I the right!!! hahahaha :lol:

There was one point where I was trying to catch a fish out of a small little pool and run and didn't get anything too big. He cast right where I was just a few moments before him. I said to him "Watch as you pull out a (BAM!!! FISH ON!!!) 10 incher .... NO WAY MAN!!!!!" So, I called it just moments before the fish took the fly. It was pretty sweet!!!
We had a blast hiking up the stream and catching tons of fish. Tons!! We didn't keep track but I would guestimate that probably around 30 to 40 fish in total between us two. (Maybe even more if you include the small guys.)

We did have one fatality. May he rest in peace. He took the fly completely in the mouth and it hooked him in the gills and tongue. And even with our efforts to revive him and be as gentle as was possible, he didn't make it. It was sad to see such a beautiful fish pass on.

We had a nice time fishing. Tons of huckleberries and salmon berries on the side of the stream. We even came across some small beaver ponds and they had some sweet fish.

I think that the coolest fish were two that MM caught. One in like 8 inches of water, and it was a nice decent size fish!! Maybe like 9 or 10 inches. The other one was in like 6 inches of water, from under a log that sat out in the open in pure sunlight. Very cool to see the fish dart out to take the fly and then it ran down stream, which was just soo cool!!!!!:shock:

We also got some nice pics for you all to enjoy. MM did an awesome job of getting some nice action shots. As you will see, the stream isn't too big but man does it hold a lot of fish!!! And we were fishing the upper stretches, so I can't wait to get back there and fish the lower stretches. What big fish will they hold? HEHEHEHE :think:ray::dance:

The hike back was just grueling because the sun was out and was HOT!! Plus we really hadn't eaten anything all day, too much fishing to do. Who has time to eat when there are fish to catch!! hahahaha

Here are the pics:

Nice little cuttie that was caught swimming in my net catching his breathe. He was a good little fighter!! 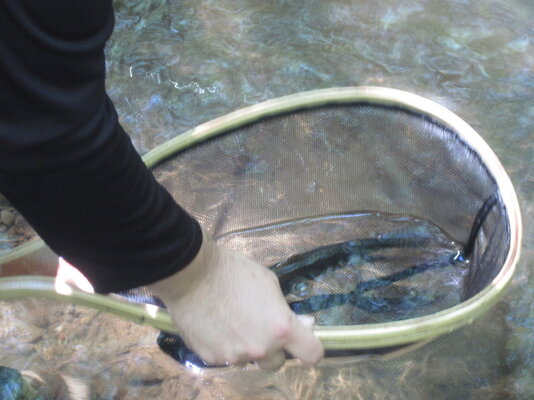 Pic of the little guy. 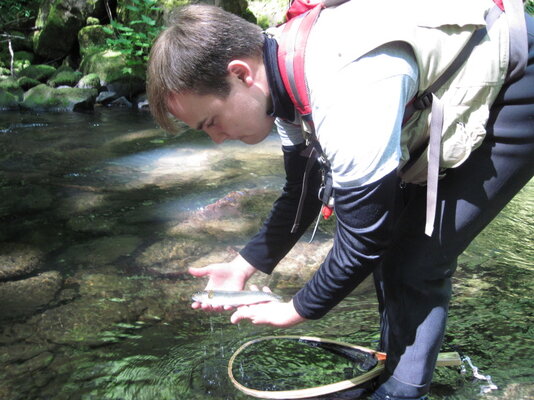 Little action shot of the fish fighting in the water. 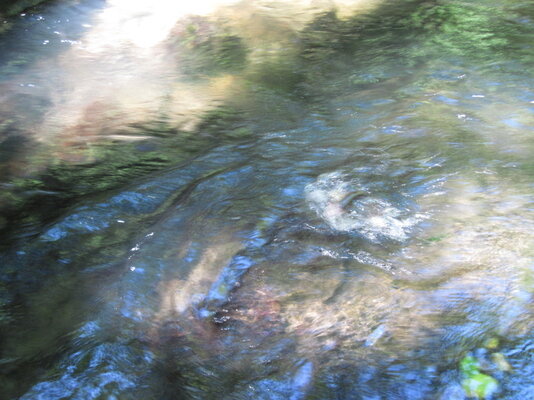 Holding up another fish. 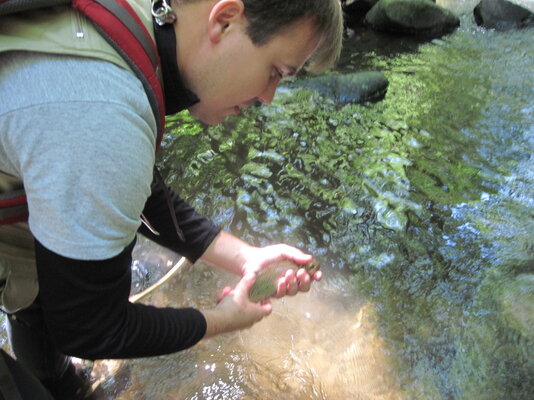 Trying to get him out of the net. 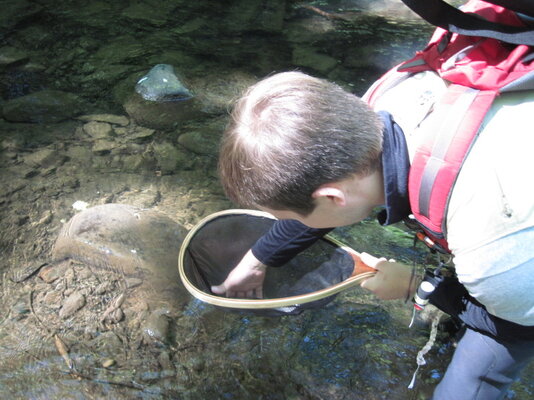 Sweet action shot of me with the fish swishing in the water. I love the little 3wt I was using!!! 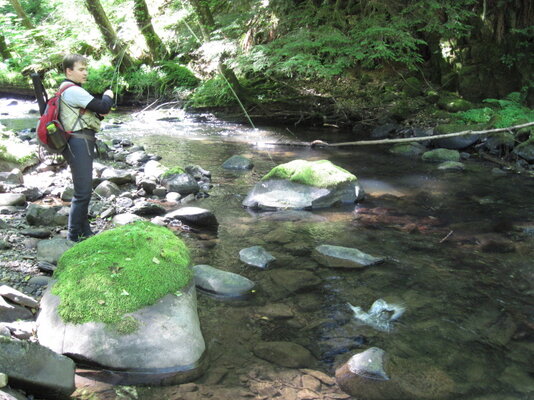 Modest_Man holding up a nice fish he caught!! 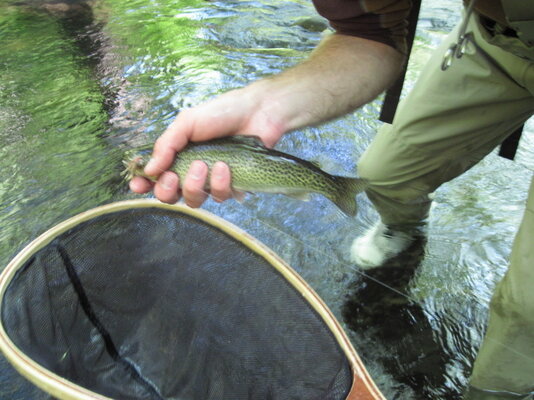 Sorry there weren't too many other pics. The batteries ran out.

I can't wait to get back up there. It is just beautiful!!!

P.S. Thanks Modest_Man for going and taking to pics. It is much appreciated.
Last edited: Jul 29, 2011
M
Modest_Man
It was a lot of fun. I started off with a dry fly probably a size 18 or 20 for the small water, but the first four fish I caught added up to about 8" of fish. Then I tried nymphing for a bit but I had a larger fish hit my red indicator 4 times in a row so I changed it up to a LARGE (size 8 or 10) red stimulator I'd found years ago on some stream and had never used and the fish were ON.

It was pretty fun fishing that large of a fly on these tiny waters, several decent fish (for the stream) were caught out of water at most 12" deep and the large fly kept off the little guys (though they did try and try and try to eat it). Several times fish were missed because they were so aggressive they'd hammer the fly as soon as it touched down and I was not yet ready to give a good hook set. Often times you could get them on the second or third cast, which was pretty forgiving with how small the stream was and the water clarity.

If you click on the photos you can see them larger. You can see on the last one (my fish) how shallow the stream was and how large the fly used was.

Good times were had, though I think we each fell once and caught several trees. I'm ready to go try my new nymphing skills on Butte Creek or the Abiqua when you're free Andrew...
Last edited: Jul 29, 2011
S
Spydeyrch

Modest_Man said:
I'm ready to go try my new nymphing skills on Butte Creek or the Abiqua when you're free Andrew...
Click to expand...

I would totally love to hit those waters soon!! I just have to make sure that I can get the time off of work and see if my wife is ok with it. I am hoping that I can get my dad to go with us. He owes me a trip and has never fly fished before. We will have to see though.

troutdude
Hmmm...I wonder just which stream that could be Brandon??? LOL

troutdude said:
Hmmm...I wonder just which stream that could be Brandon??? LOL


Oh this one isn't down by Brandon. And I doubt that it has been touched by human beings for at least a few years. There were literally hundreds and hundreds of fry and small trout. This stream is flourishing!! But it isn't one that Brandon has been on, at least not yet.

P.S. Thanks for the compliment too. It was a blast out there!!
M
Modest_Man
The lack of human trash was astounding.
S
Spydeyrch

Modest_Man said:
The lack of human trash was astounding.
Click to expand...


Yes it was!!!! Beside the logging road and the three trucks that we saw, I don't think that I saw a single piece of trash in that area. Not one!! It really was magnificent!!!

-Spydey
B
bigsteel
way to go guys,looks like a successful trip
You must log in or register to reply here.