Then it was "lights on", for about an hour or so. Quickly C & R'd several fish, and plopped a couple more onto my stringer. Lemon / Lime Power Eggs, were the main breakfast fare. But, orange power eggs also did the trick. (Gotta change up the pitch, from time to time...ha ha ha).

Here's a pic, from where I was banking it: 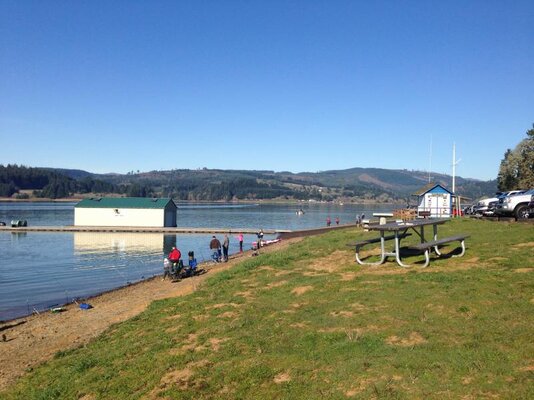 Here's some trollers, out in front of our patch: 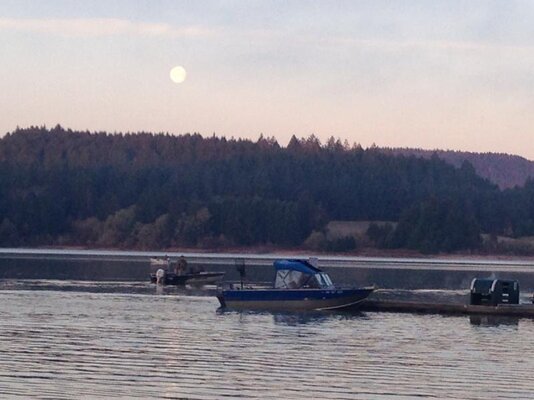 This is a pic, looking towards the dam: 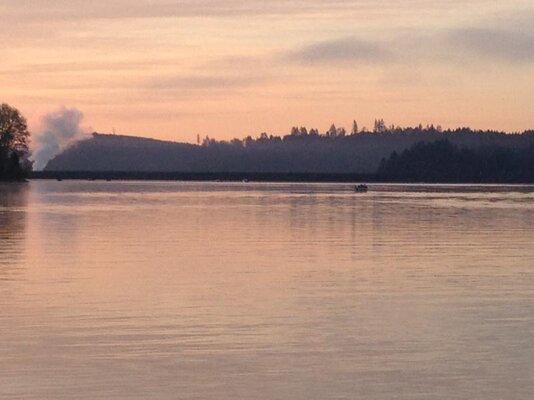 On more than once occasion, I had "doubles". One thing that I've never regretted; was getting a 2-rod license the very first year it was OFFered! Would've had my limit, in about an hour. But, I slipped about 10 back into the drink. Kept fishing, until about 9:30 or so...until I decided, to tag keeper #5.

Just as I was baggin' the last fish; a fellow to my left started up a conversation. He said that it was his first trout outing. So, I started to tell him about OFF...then one of his fishing buddy's heard me...and came bookin' over, to introduce himself. It was fellow OFFer MontyM! 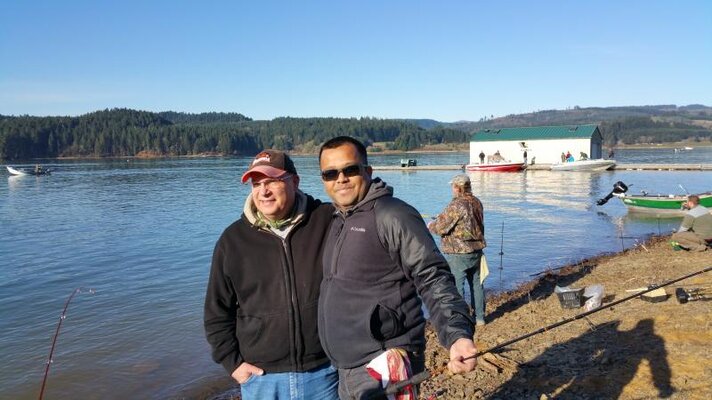 I also met a guy, to my right, that morning who was a local dude. His name was Harvey, and was a pleasant chap too. You can see Harvey, just over Monty's shoulder in the camo jacket. He lives a stones throw, from the lake, so he's a "regular". He had not heard of spoons like Little Cleo's, or Thomas Buoyant's, so I showed him--and his sidekick--a couple from my tackle box. Just doing my bit, to share some info. about great lures.

After keeping fish #5--and chatting with Monty, and his friends for a while--I packed up, and let those guys move into my chosen pocket. I believe that they caught, a couple more fish there. Also while chatting with those guys, one of my friends went by with his son. They were trolling, in a nice raft. The kid had 4, and dad zero. But I found out later that, they both got their limits.

After bidding adieu to Monty, his friends, and Harvey...I loaded up the rig...and bee-lined it for, the Lake Stop Store. It was about 10:00, and I was hungry. But, they didn't have my "signature breakfast" ready yet (fresh baked pizza). So, I opted for a sausage dog, with sauerkraut. It was a GREAT choice!!!

From the store, I set about on a recon mission. My primary goal, was to find a nice spot for tubing. Found it; where Sain Creek flows into the lake. Here's a couple of pics: 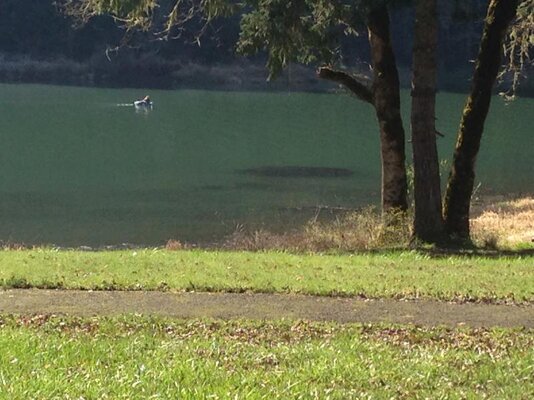 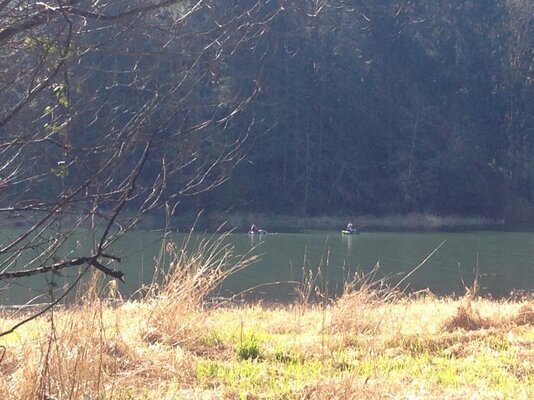 Here's some shots, looking out into the Sain Creek arm...towards where it drops, into the lake proper: 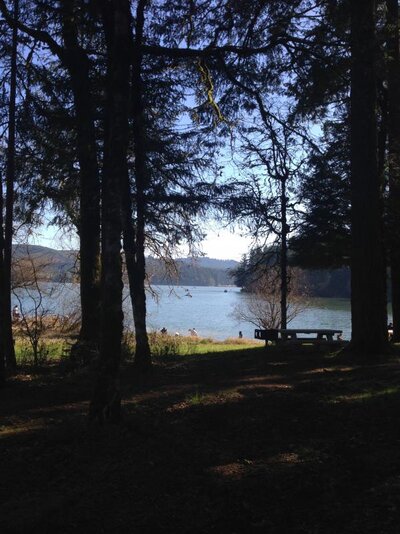 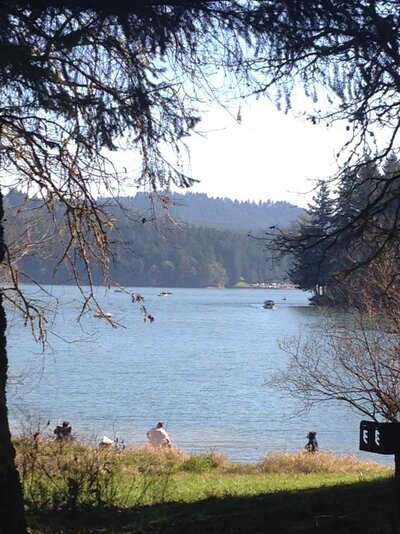 Then the lens gathered, a shot, on my next stop: Scoggins Creek (looking downstream, towards the lake). 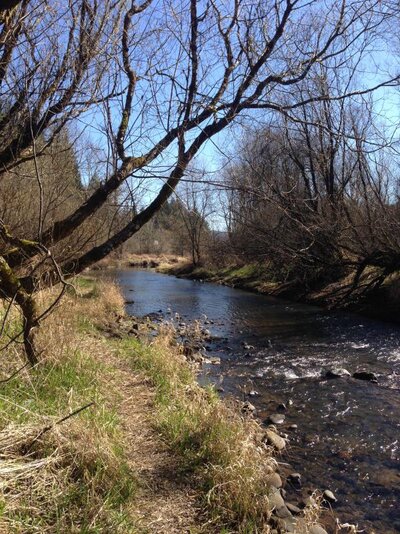 One more pic, from the southern corner (looking back towards C Ramp): 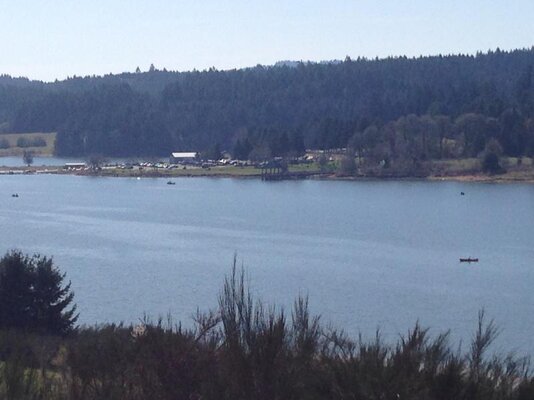 All in all; it was a much needed day OFF. It was 69 degrees, when I finally left the park. On the way home, I bought some MINT condition vinyl at the store in Yamhill (old recordings, for the youngsters), and some bubble gum ice cream AND a new (to me) 7' fiberglass Fenwick spin rod--with a very nice, and balanced--Mitchell rear & trigger drag reel. Discovered the Fenny at an antiques store in Amity. Oh...and I gave my fish, to my mom's neighbor.
Last edited: Mar 10, 2015

bass
Great report and pics! Sounds like a wonderful day at the lake. You have me motivated to get the kayak out there in the near future.
B
BaldTexan
Great report and pics! It was a great weather day out there Saturday and my first time fishing Hagg. Super warm and sunny and it appeared most folks were catching. We trolled the opposite side from the ramps and caught them on worms as well as different colors of power bait. A lot of C&R or we would of had a short day. I assumed there would be a lot of OFFers out but didn't recognize anyone....but my remembery gland isn't what it used to be. Glad you had a good day!

troutdude
Thanks everyone. I forgot to mention that, everywhere I went...everyone was catching fish!

P.S. Clean up the original post, so it's easier to read. Am hoping to return, this weekend, and do a tube float.
Last edited: Mar 10, 2015
S
sapo
Excellent report...Wow, Scoggins is really low, I fly fished it last summer after a nice day at Hagg to see if I could hook up with some trout, and it was a lot higher than that..Worries me for the upcoming summer, considering the snow on the mountains is 10% of normal and the GFS, GEM, and ECMWF are all predicting the same warm and dry pattern for awhile now.

troutdude
Thanks for the "cred" Bass!

PK Yi
how was the boat ramp? was it like a zoo?

troutdude
I didn't really pay attention, to the ramp action. But, the parking lot was full.

The water level, was down a little. But not bad.
M
montym
I don't know Jay, I was at ramp C on Sunday and the water level seemed like what it was in May last year. I had not been to ramp A till summer last year so I could not tell you, but at ramp C it is definitely much lower.

Cheers
Monty
You must log in or register to reply here.