Got called into work today...

R
rippin fish lips
Turns out i was scheduled to be out on the water by 5 am. Made that happen... fished hard with nothing to show but a little trout for the first fish. Moved up river to an area where squach is "posted" up at, got to a tailout only to see about 10 steelies stacked up in it. Fished it hard at every angle, every speed you could possibly real in a lure, they didn't want to bite... so i switch over to a #2 blue fox and once again, fish it hard at every angle, every speen with no bites. So finally i figure hmmm.... maybe if i cast it a foot infront of there nose and let the spinner just free fall right to their faces, well i did that and it went "fluttering" down, i watch for a bright flash in the water and i see one, now i feel for the pull then the headshakes, yep hes there! Fish on!! put up a good 10 minute arial battle and landed her with no net. Put her on the tag and got back to fishing the same hole with nothing to show after. I move down to the next hole and on the 4th cast, Fish on! was a 12ilb hen that put up a good 15 minute battle with 1 jump, then she diceded to play with me and the current. Got help from someone who had a net. was a super good day!! 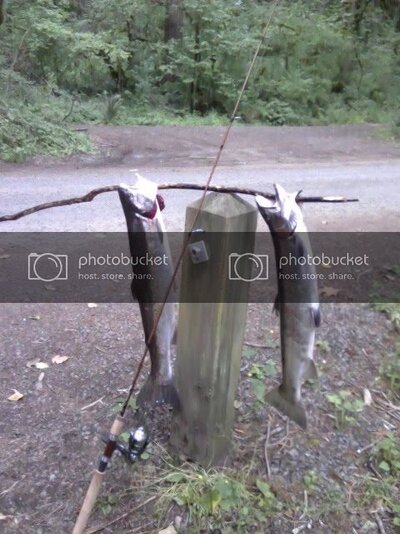 R
RunWithSasquatch
doesn't get much better than that... nice work, nice fish!

Gunga
Me so jealous!
B
beaverfan

rippin fish lips said:
Moved up river to an area where squach is "posted" up at,
Click to expand...

:lol::lol::lol:
:clap::clap::clap:
T
TTFishon
Nice fish dude!
B
bigcat1967
love the pic dude...
P
plumb2fish
Wow, I hadn't even noticed that some tweaker had stolen the aluminum cable up there til now....guess I haven't bank fished much up there since early june....BTW

I'm gonna have to start hitting then banks of the Rogue in search of my first summer run of the year !
R
rippin fish lips

plumb2fish said:
Oh yeah, Squatch's Name is most likely Barry and is a really nice guy...
Click to expand...


yes yes!! he is nice! he is the one that netted it for me im pretty sure!! He has camo brethable chest waiters?
You must log in or register to reply here.