C
catphish
Known formally as a golden, albino, or palameto trout. Was looking round the web and came upon this pic. Anyone ever caught, seen, or heard of one around here.
Last edited by a moderator: Feb 25, 2018
P
PDXKush
Wow that's an interesting looking fish. I think Ive seen some glowing orange ones @ Trojan Ponds ... Do those count? jk
D
dude young

catphish said:
Known formally as a golden, albino, or palameto trout. Was looking round the web and came upon this pic. Anyone ever caught, seen, or heard of one around here.
Click to expand...

Never around here, but we used to sight fish for them in PA. They stock them out there. It was pretty cool to look down into a stream and see them just sitting there, glowing.

Never kept/ate one though. They swear they are just a rainbow variant, but I don't trust it. Kush - I thought the same thing about them when I first saw them. Three mile island and all.
P
PDXKush
3 mile island lmfao... I used to visit family in PA. Never got to 3 mile island but heard some interesting stories. Good stuff

Well said.:clap:
H
hendrixfan
I have heard/read rumors of golden trout residing in some of the high lakes/creeks in the Eagle Cap area...First I have ever seen of the albino, golden rainbow hybrid.

Someone needs to invent some fishing glasses that make all fish turn that color, even I might be able to find a steelhead then.

Words of wisdom for sure.
W
watchout trout
Every couple of years my family travels to Utah to visit my brother. East of Salt Lake there is a little reservior that they stock with tiger trout, rainbows and these albino rainbows. They are a blast to catch. We would walk the banks looking for them, then cast a woolie bugger near them. They are super aggressive and bigger than the normal rainbows. Oh, and they taste just like a normal hatchery fish.:shock:
T
TTFishon

catphish said:
Known formally as a golden, albino, or palameto trout. Was looking round the web and came upon this pic. Anyone ever caught, seen, or heard of one around here.
Click to expand...

The only place I've seen them is at the Leaburg fish hatchery on the Mckenzie R.
O
osmosis
I know of more than a couple places with Goldens in Oregon. We got several over 24" last year too. 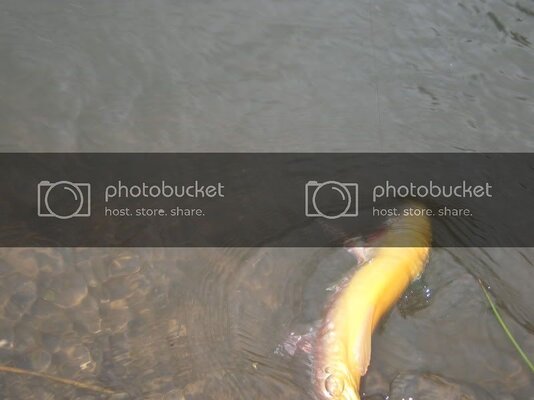 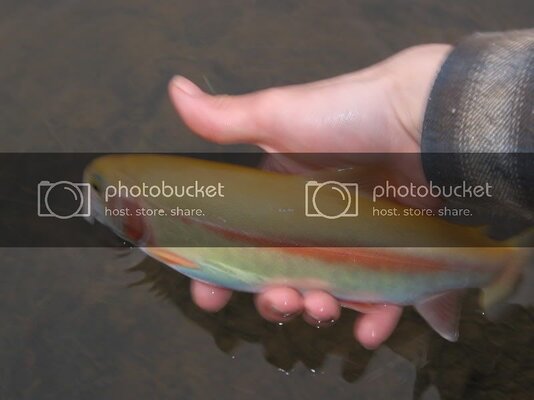 osmosis said:
I know of more than a couple places with Goldens in Oregon. We got several over 24" last year too.
Click to expand...

Those are sweet! Never heard of a golden trout before this thread. I learn something new on OFF at least once a week :clap:
C
Cake
Here's a whole page of movies on them.

osmosis said:
I know of more than a couple places with Goldens in Oregon. We got several over 24" last year too.

Pray tell, where are those places Osmo? I want to catch one.
Click to expand...

D
davep
yep....the ofc used to stock them in their still waters....they like fast moving baits...the osprey ate them like candy...they have a habit of lying in the shallows and that was their undoing...we caught them up to 24 inches....
F
Fleadog
Aguabonita

Species name Aguabonita (pretty water). Golden Trout or Kern River trout originated in the Kern river drainage of the Sierra Nevada Mountains in central California. They used to be exported through out the inland west and as far away as England before California passed legislation prohibiting the shipping of fish and eggs out of state. Golden trout commonly hybridize with rainbows and on occasion, with cutthroat. The world record Golden trout was an 11 pounder caught in Cook's Lake, Wyoming in 1948.The largest Golden trout are taken from remote waters at high altitudes of 10,000 feet or more. Goldens are now most common in lakes and streams in mountainous areas of the west.

Trout: Stream-Fishing Strategies, 1999 North American Fishing Club
H
halibuthitman
Try the eagle cap..... and also fyi.... the state record is only eleven ounces, the eleven pound oregon record was a mistaken entry by fish and game. I will be taking a stab at this record in september.

"most my money I spent on beer boats and trucks, the rest of it I wasted"
You must log in or register to reply here.

F
First salmon on the fly