F
Fishnsleep
Finally, a good ocean forecast for two days in a row, Sunday and Monday. Tides a bit large, but they did not present any issues. Went down Saturday night and early Sunday morning headed to Three Arches with Jeff and Inna. The bite was very good. We got all of our ling cod, (6), and limits of bottom fish, (15). We were back to the dock before noon, and having our fish cleaned. An eight ounce copper pipe jig, 5 ounce flutter jig, and 8 ounce bullet head jig with a grub all produced equally well. It was a great day, nice to be back on the ocean again. Tons of bait fish, the fish were gorged, and the birds were seen working schools of fish, herring, anchovies, needle fish?, I do not know the answer. Things are looking good.

On Sunday, my friend Todd and I went back down to Three Arches. The bite was good, but nowhere as good as the prior day. We got limits of lings and rockfish, but had to move around and work to find them. We had dropped three crab pots on the way out, with yesterday’s carcasses, in about 55’ south of the south jetty, and were pleasantly surprised to have 26 keeper crab out of the three pots. Two were released along with several females and sub legal size. The crab were very full of meat, and delicious.

Now, to make plans for Memorial Day weekend, although the ocean forecast is not looking very friendly. I think Friday and Saturday may be doable, but Sunday and Monday are not looking feasible as of now.

Casting Call
What a meat run!!! Nice to show that anybody can catch the same with right equipment. BTW ice bags are the ONLY way to go. Fill with catch, add sea/fresh water, part zip it up to drain or carry. Easy peasy with handle or shoulder straps Congrats Tony 10%er
Last edited: May 28, 2022

DOKF
I thought that was an old gym bag ... Didn't realize it was a special purpose "ice bag"

Casting Call
Back in the day dad always used 2 canvas army O.D. duffel bags. One for Dunge. crab the other for rock crab and surf/pier perch. Bags had side handles sewn on and body length shoulder straps. You old salts know what Iam talking about. Sholder strap to carry, handle to swing on to the bed of the truck. Tony 10%er

Casting Call
Use a diaper bag, I don't care try a recycle bag, gunny sack, a bag is a bag. Tony 10%er

jamisonace
I got out too but I don't think our conditions were as favorable out of Coos Bay. The forecast changed on us last second but we kept our plans to get out first thing in the morning. It was super bumpy going over the bar and then again in front of Simpson Reef. We found calmer water to the North of the exposed rocks but the fishing was much better to the West of them. We should waited a couple hours to launch because by the time we were done cleaning these the fish everything had calmed down just like the forecast called for it to do. The bass fishing was hot. When we found them they bit and it never took too long to find them. Unfortunately, my friend was really nervous out there in a his boat that he's only had out a couple times so he wouldn't fish when he was at the wheel. After I got my limit, I took over at the wheel and we limited him out pretty quickly with both of us fishing. I would have stuck around to get ling cod but the wind picked up pretty good as soon as we had our two limits of bass so we thought it best to head back. Definitely not worth the 3:30 am drive to Coos Bay from Roseburg for 5 bass but they'll make a nice fish fry tonight.

jamisonace said:
I got out too but I don't think our conditions were as favorable out of Coos Bay.
Click to expand...

Another nice meat run. Tony 10%er
F
Fishnsleep
Nothing worse then when the wind kicks up and you have fight it heading back to port.

I love a south wind out of Garibaldi, then it is at your back returning from Three Arches. On really nice days, with south winds 5 or less, have gone down to Pacific City, that is fun. But the wind needs to be right, only happens once or twice a year for me, if I am lucky.
F
Fishnsleep
Was at work Friday afternoon, when I got a text from Todd, want to fish Saturday was the question. In looking at the forecasts earlier in the week, I had ruled out any ocean fishing. I checked the forecast again, and texted him back, sure let’s go! We went down Friday night, and stayed in my travel trailer. We were on the way to Three Arches by 5:00 a.m.

The black sea bass bite was great, best I have seen in a long time. We got all of our bass, and 3 lings, had to work for the fourth ling, but we got it. Some of the lings had whole herring, green label size, in their mouths when caught. To match the hatch, we switched to five ounce flutter jigs. It was only about 10:00 a.m. and we headed back to Garibaldi. Let’s stop and troll for salmon, Todd said. He keeps two back up rods in the boat. We managed to find a very old can of tuna, opened it without the aid of a can opener, and mixed in some bloody tuna. We then deployed 3.0 Spinfish in about 140’ of water, a few miles south of the Tillamook Bar. Hey, Todd shouted, you just had a takedown, really? I said. A few minutes later Todd caught and released a native coho. Then my rod went off, a beautiful 11 pound chinook, weighed on a scale. I forgot how well they fight. Now to get Todd a chinook, after releasing four more coho, Todd got a chinook.

I was about 1:00 p.m. at this point, so we called it a day, and made the trip back to Portland. Now, to plan for next weekend, which is the opening of the selective coho season. I hope the weather cooperates. 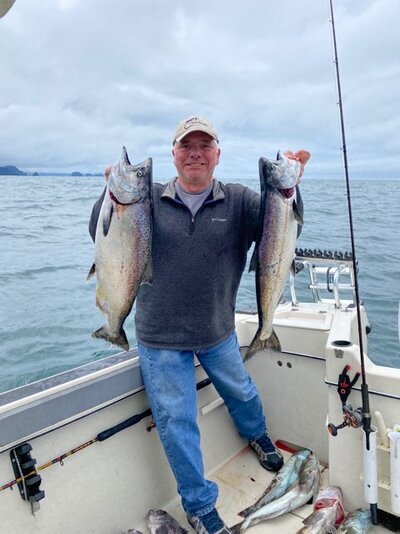 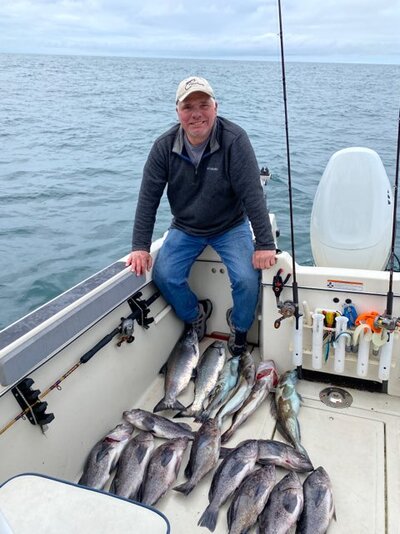 Diehard
Nice fish looks like your in for some great meals