Saw very nice ocean conditions for Sunday, and decided to go bottom fishing and crabbing with Chad and Todd. Dropped three pots on our way to Three Arches. Once there we only managed two keeper ling cod, one canary and eight sea bass. On the way back to our pots, my 2014 Suzuki 115 four stroke stopped running. No electrical at all, no warning beep, no power trim, etc. Luckily we were close to our pots, picked them up, surprised to find twenty keepers in the pots. Finished the trek back to the harbor on the Suzuki 9.9 kicker motor at about 5.5 mph.
When on the ocean I usually try and call it a day about 1 or 1:30 p.m. Part of this is I still have to drive back to Portland, clean fish, cook crab, etc. Another reason is more daylight hours if a situation does develops like it did for me. I was very thankful for a calm ocean and not very strong ebb tide.
I think part of the reason for a somewhat slow fishing day may be that there appeared to be a lot of bait in the water, this should bode well for the future.

Glad you were able to get back on the kicker. If you think about it, let us know what the problem was with the big motor. Had a 115 Mercury do that to me out of Astoria, turned out to be a fuse way up under the dash board. Did not figure it out until I was back at the dock.

" I was very thankful for a calm ocean and not very strong ebb tide." I certainly believe that!

Great report and sorry about the motor. Thank god you had the kicker.
Let use know what the problem was (fuse) ?
My buddy in Mexico just switched to Suzuki
F

I will post the problem when I get boat back from shop.
F

I love spending time in Garibaldi, been doing a lot of bottom fishing, coho fishing, crabbing, and recently harvesting mussels, which are quite tasty, you can keep 72 per day with a shellfish license. Have been catching lingcod off of Three Arches, the coho off of Twin Rocks, in about 180 feet, and the mussels off of the north jetty beach at very low tide.

Nice ocean harvest! We just hauled the boat down to Newport. Going to go after the near shore Halibut and coho. Did they ever figure out what the deal was with your main motor? I remember you had some kind of problem with it back in April. Oh those mussels your right they taste grate.

Nice haul! You're living the dream.

I going Back to Windy Bay tomorrow it has been on fire down there.
F

Drove down on Friday afternoon, went out to the dinner reef, a half mile or so off of the north jetty, for a few hours, about 12:00 p.m. to 3:00 p.m. saw some schools on the fish finder, but none that wanted to bite. Went back to port and rested up for two full days of fishing. At 6:00 a.m. Saturday Jeff and Inna , Team Schwab, arrived from Portland.

We launched my boat, and headed to Three Arches, it was not a calm day, the waves were mixed , but we finally made it. The bite was very good early, maybe 7:00 a.m. till about 9:00 a.m. for bottom fish, we all limited on bottom fish and Jeff and Inna each caught a nice ling cod. Then the bite died, could still see schools but no action. Decided to call it a day about 12:00 p.m. and head back to clean fish and relax at my travel trailer in the Garibaldi RV Park. Staying in Garibaldi rather than driving round trip back and forth to PDX in one day is awesome! For years I would dread having to load the boat up, drive home 1 hour and 40 minutes or so, then deal with fish cleaning, flushing motors, washing boat off, etc. Now it is a 30 second drive to the RV and I can begin the clean up process, significantly less stress.

On Sunday I fished with Pat, Todd, and Tony out of Pat’s new to him, 26’ Striper with twin 150’s on the stern. I have a 20’ aluminum Weldcraft, the trip to and from Three Arches was much much more comfortable in the larger fiberglass boat. I do really enjoy my boat, but the smoother ride was a welcome change. The bite was the same as Saturday, really good early, then it died off. Before it died off, Pat managed a limit of bottom fish and a nice ling cod, I got a limit of bottom fish, Todd and Tony each caught several bottom fish, but the real excitement was Todd hooking and landing a halibut. Since it was not an all depth halibut day, it was legal to keep. We headed back to clean fish around 12:00 p.m. We all had a great day and really enjoyed being in Pat’s boat, for Todd and I the first time in it. Now, to get through some “work” days until I had back next Thursday. I have still never caught a halibut, hoping that changes next weekend! 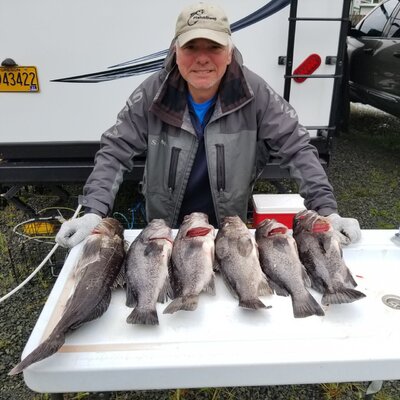 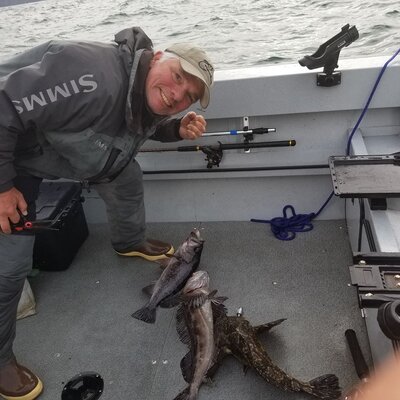 Great report! What were you fishing with? What did he catch the halibut on?
F

We were using 6 and 8 oz jig heads, with 6" black curly tail grubs on them. Seemed to be the color preferred that day, over white, motor oil, etc. A lot of the fish were caught on 2 "shrimp flies" that are above the jig. Kind of like a big trout fly.
F

Went down to Garibaldi Thursday night, did not plan on fishing Friday as the forecast was not good. Luckily the forecast was wrong, and I went to Three Arches with Captain Jim in his 19’ Arima. We got a late start, were not planning on fishing, but each managed to get a nice ling cod and a sea bass. Saturday was a wash out, rain, wind, no fishing, so went to Tillamook Sporting Goods and spent some of my allowance

Saturday evening my friend Todd came down and we headed out early Sunday morning, about 5:30 a.m. I got 2 ling cod and Todd got a limit, 5, of sea bass, then the bite died. We moved around a little bit, but no success. About 11:00 a.m. I said the heck with it, let’s go bang some lead of the bottom deep. We went out to about 200’ and using 24 oz Norwegian Cod Jigs, we managed 2 more nice ling cod and a quillback, before calling it a day. The wind had picked up more, it was rough all day, and the trip back to the Jaws was “bumpy” to say the least. After filleting and vacuum packing time to head back to PDX and prepare for the next weekend of fishing. Todd lost most of his lead jigs, and found his tackle box much easier to carry at the end of the day, that’s one way to make things easier? LOL. 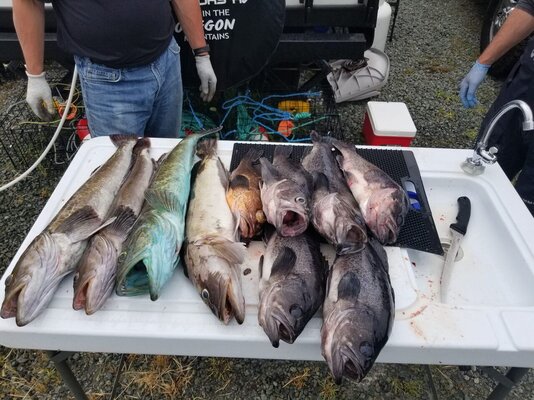 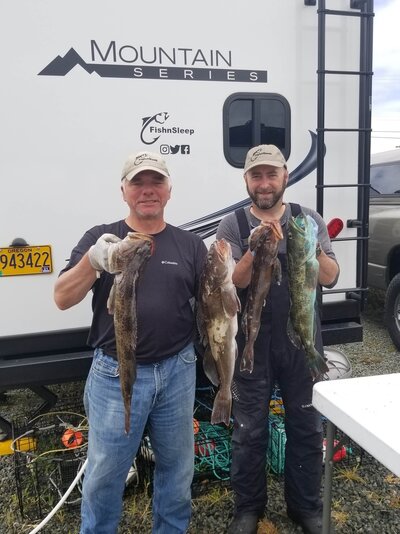 Drove to Garibaldi Wednesday night, went surf perch fishing Thursday, no luck. Tried from the beach on the North Jetty side, some other anglers there also, appears no one was having any luck, oh well, first time I have tried this, it is fun, and good exercise.

Thursday evening, my friend Todd came down and brought his 19’ Arima. I did not bring my boat since I needed to pull out my travel trailer from the Port of Garibaldi RV Park Saturday. We fished Three Arches on Friday morning, managed 3 ling cod, a couple of canaries, and a widow fish, it was slow. So, we drove north to Twin Rocks to troll for salmon, targeting coho. Had three drive bys that did not stick, fishing shallow, about 23’ on the line counter. Later, as we were trolling around the South Jetty area, my rod went off very hard! I landed a nice 14 pound, scale verified, hatchery chinook. Later, Todd landed a nice hatchery chinook also, he was fishing at about 45’ on the line counter. We were both using cut plug green label herring on about a five foot leader, behind a triangle flasher. We finally called it a day about 3:00 p.m. it was a long day as we woke up at 4:00 a.m. and were probably fishing by 5:30 a.m.

Saturday, we started again at 4:00 a.m. and made the boat ride to Cannon Beach. Started off very fast, we had a double with ling cods, and both were keepers. The bite slowed, we ended up with 3 ling cod, 3 canaries, and a tiger fish kept, as well as a huge 12 pound cabezon that Todd caught. We thought it was going to be large ling cod or a halibut until we saw it. What a ferocious, cool looking fish these are. Daily bag limit is one per day, part of the daily 5 fish limit. This started July 01, and goes until the quota is met. We were using heavy diamond jigs, 12 to 24 ounces, to catch these fish, except the cabezon which was caught on a paddle tail swimbait. Had a rough boat ride back to Tillamook, and after a little scouting, decided to call it a day. Got back to the trailer about 1:00 p.m. very tired, but happy with our 2 days of fishing. If you look closely at the last picture, you will see a large ocean sunfish, mola mola, that we saw Saturday on our way back from Cannon Beach. 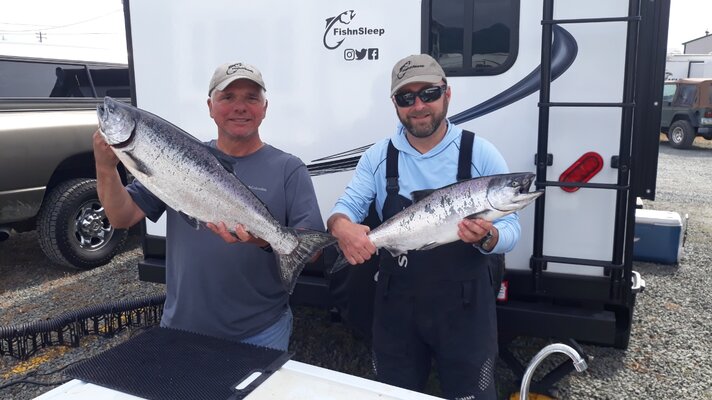 Dang that looks like a boat load of fun thanks for sharing your experience. Are those spring chinook?

I sure love reading the fishing reports from you saltwater anglers. You guys get the biggest fish to fight on rod and reel, and the best eating fish as well. Sounds like another great adventure!

Awesome! Love to see those salmon hitting the deck. I'm planning on getting out this Thursday from Bandon or Coos Bay for bottom fish and salmon. Hope the ocean forecast holds.
F

Yes, they are chinook, not sure if they qualify as springers though, good question.

Great report we got 5 salmon in two days out of Winchester last weekend.
F

Took the travel trailer down on Friday, August 14th. Did not get to fish until Sunday due to rough ocean conditions. Sunday was the last day for selective coho in this region. Was fishing with my friend Jim in his 19’ Arima. We were in search of coho, and began fishing in about 180’ of water off of Twin Rocks at about 23 to 35 feet on the line counters, with 12 oz cannonballs, triangle flashers and cut plug herring.

After an hour or so, I believe we had one hatchery coho at this point, we decided to head west and try fishing deeper. The water appeared to get a little warmer as we went west. We ended the day with three nice hatchery coho, several strikes that did not stick, and released a couple of native coho and some very small coho as well.

The non selective coho opens in this region on September 4, and continues on each Friday and Saturday until September 30, or when the quota is reached.

I love the crazy jumping fighting coho, a blast to catch, and excellent to eat. 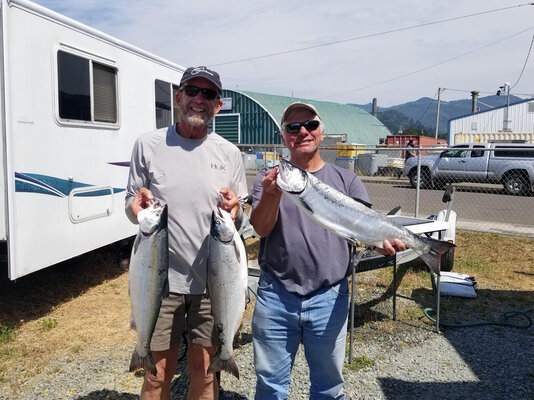 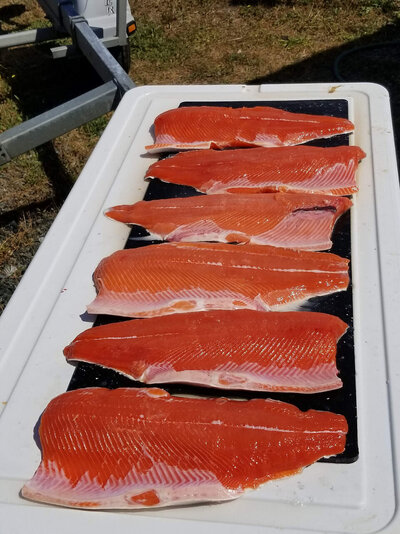