Fun on the Necanicum

N
n8r1
First OFF, is there any chance the Necanicum could be added as one of the NW Rivers? There are at least a half-dozen posts on this river alone, more than a lot of the bodies of water that are already listed.

I took a couple days off work and headed to Seaside with my wife. She said I could devote 1 day to fishing, so I chose Friday since there was college football on Saturday

Before I headed out, I sipped coffee and watched the sunrise while I sat out on the balcony of our place (it faces the Necanicum) and watched in excitement at all the Coho jumping. Everywhere I looked, the water was splashing. So I grabbed my pole and tackle box and headed down. Started fishing the tidewater just above the 12th street bridge where I saw a few splashes, but no luck. I did managed to catch a few tiny sculpins and was amazed that they were able to even get their mouths around my #5 blue fox hook. The lure was literally the same size as they were. Just as I was getting ready to switch spots, a boat 50 yards down from me brought in a nice native Coho. I only caught a glimpse of it as he held it up for a quick picture and released it.

In the early afternoon I made my way down below the 12th st bridge to where the estuary widens, and this is when the fish really started jumping. Every 30-90 seconds a Coho would surface, and they were all over. It was FRUSTRATING to say the least. I threw everything I had out there in hopes of finding the magical color, but nothing was attracting them. I walked all the way down to the sandy beach and talked to every fisherman I passed (about 12 total) and nobody was having any luck. Blue Fox spinners seemed to be the popular choice though.

Then I made my way back to the 12th street bridge, and on my first cast with a #6 blue fox, pink body/silver blade, I caught the biggest sculpin I've ever seen. I've caught dozens of these annoying little fish, all by accident, but ever single one was the size of my thumb. However, this one was 8 inches long and fat. I debated using him for crab bait, but decided to throw him back.

Around this time a game warden came up and checked my license/tags. He was the nicest guy you could ever meet. He grew up in Seaside and knew the Necanicum really well, and had some good suggestions. However, he said that some days the river was hot, and other days the Coho just aren't biting, and that day was one of the slow ones. One thing he mentioned that really surprised me is that there are a few Sturgeon in the Necanicum. Not nearly as many as the larger bays and estuaries, but they venture in and head toward downtown Seaside to get away from the seals. So maybe I'll give them a shot one of these days...

Finally toward evening I made my way back to my original spot. Still fish jumping, still not biting. After losing a couple spinners to the debris on the bottom, I decided to switch to a bright orange wiggle wart. After a couple casts, BAM! Coho on! Finally! Wait...this doesn't feel like a Coho. Maybe a jack? Or a searun cutty? To my surprise, when I reeled in, I had an 18 inch flounder on the end of my line. I caught a flounder once before when I was targeting surf perch, but he was the size of my hand. This one was huge. I debated whether to throw him back or not, but decided to keep him for crab bait. It was a good decision, because I caught 3 keeper males with him (along with about 5 million females).

As I baited my crab trap on the 12 street bridge, a local came up with a gorgeous 31 inch fin-clipped hatchery Coho, shiny and beautiful. It was a stray from another system because there's no hatchery program on the Necanicum and most of the Cohos are natives. However, he wasn't very helpful on what he was using. All the information I could get out of him was that he was "trolling a spinner."

All in all, a fun day on the river even though I couldn't bring in any of the elusive Coho. Attached are pictures of the Flounder and the trophy Sculpin

***NOTE*** For some reason I can't attach any pics. I'll try from my iPhone because for some reason my CPU keeps freezing up when I try and upload them.
N
n8r1
Here we go, now it's working! 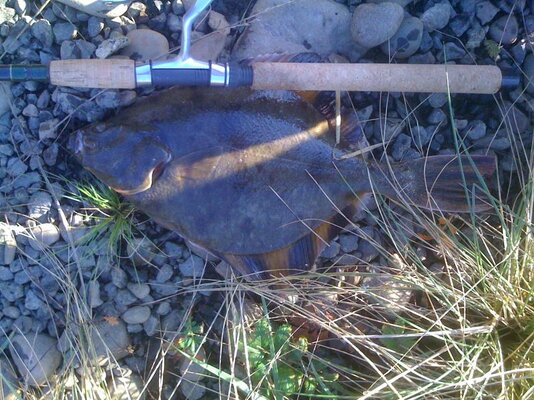 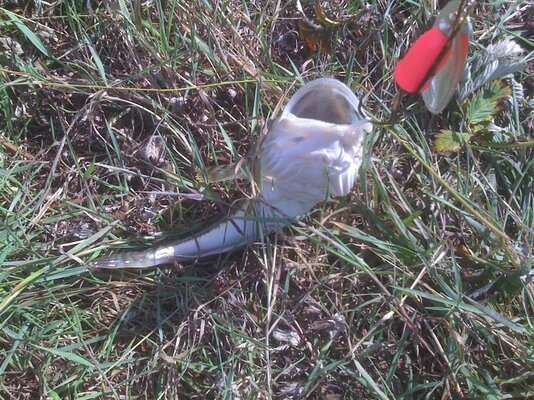 My buddy and I fished on the rainy Sunday. I was skunked, but he landed a pair of beautiful searun cutthroat at Klootchy Creek. Biggest ones we've landed so far this fall.

He caught the small one first, just as we were going to give up on the hole after working it over for a half hour. Put it in the bag and he cast again and caught the big one... first time it boiled to the surface, I couldn't tell if it was cutthroat or salmon, then it leaped and could see that it was a large cutthroat. They dressed out to 2 lbs of dinner!

I've nicknamed him "Rulebreaker" because everything about this catch broke all the rules... virtually the last cast in the pool rather than the first, 'small' fish was first, both from the same pool, etc.
Last edited: Sep 27, 2010
F
FishFinger
Thanks Great Report.! It's amazing the number of coho and Chinook that are moving in........ Finally.

I've made the Necanicum an obsession this season. I have a few friends who are Seaside locals and I've invited myself down.........for the last 7weekends.

You see my buddy has a "Wall of Death" and on it were pictures of 30+ lbs fall Chinook, all caught this time last year. I committed myself to be part of this fishery 9 months ago, like most things this year, it's a bit later than usual. And I'm not about to give up yet!

LOL a trolling spinner...... Even the locals hide what they use from each other. We make sure the secret spinner is swimming at depth when around other anglers are near by and we hang units that are not productive on our b/u rods in full view......

I will give you a hint tho, were using #7 blades and the Sculpins try inhaling those as well. I think we have caught 50+. They are super aggressive little buggers....

Crabbing off the 12 street bridge......... I'm kinda surprised you harvested 3 males, in that; that bridge is a crab pot gauntlet.

Sustainable female crabbing operation. Pots get pulled, females get pitched back, pots get re-set, fill up with females, and on and on, all summer long.

Having a boat and friend who give me Tuna Gutz ( ty BobbieDoll) we do much better setting the traps well down stream from the bridge.

If you go back before the Chinook run is over PM me and I'll share w/ a fellow offer, what the color combo of the Necanicum Killer really is.
S
ShdwmnkyX
I have actually read that Sculpin are actually pretty good. Someone pointed out that they were related to Lings and Cabezon. I'm adventurous, and wouldn't mind trying one if i caught one big enough.
T
the_intimidator03
nice starry flounder i wouldnt mind targeting flounder a time or two. guess it would help not to target everything else that bites on the coast :-D
M
Midgeman
Intimidator03 - I agree with your last statement, some pics are painful to see.
N
n8r1
I was only targeting 1 fish: Coho. The sculpins, flounder, and a small crab that got tangled on my line were just casualties

Sculpins in particular are some of the most aggressive fish I've ever seen. Little 2 inch ones would chase my #6 Blue Fox all the way to the bank. Too bad they aren't bigger; they might be fun to catch.


the_intimidator03 said:
nice starry flounder i wouldnt mind targeting flounder a time or two. guess it would help not to target everything else that bites on the coast :-D
Click to expand...