T
The Nothing
Interesting how fishing for sturgeon is very similar to salmon/steelhead. Slight differences in bait, water depth, and thats really it...

Went out along the Willi for sturgeon for my first time thursday and friday. I fish the same spot both days, and have fished this same piece of rock in the past and hooked up with some Smallmouth. I knew the water here was deep, very deep, so I figured it be good for sturgeon as well

Boy was I right. I had my line in the water for 5 minutes on thursday and got my first hit. Holy S! I fought it for 20 minutes before an oversized flashed itself at the surface and broke off the line in some rocks. Wow! I was sore and pumped! I fished the rest of the day, seeking a rematch, but it never happened. Several boats seemed to know about my spot this year. I think at one point i counted 12 Fortunately they all gave me enough room to fish from the bank.

Friday I headed back with fresh bait, and found even more boats in the area. Some down river were hooking into steelies, and everyone around me was looking for the sturgeon. On the day, I was the only one in that area.

I had been there for 3 or 4 hours and getting little action. Actually, let me rephrase that. No action. Cleaned up the area from trash that was laying around (which is funny, i've NEVER seen anyone else on the rocks i fish from, but trash accumulates). I watched a BUNCH of new boat owners have anchor pulling issue. *BOAT ON!* was the phrase of the day.

I sat and watched two guys in a boat pull up and drop anchor right where I had been casting all day. They didn't seem to care that I was there, and didn't even say anything when I hollered at them. Nice. Just as they were getting settled, my rod bent in half, and nearly jumped out of the rocks I was using as a holder. I grabbed my rod, set the hook, and yelled at them again. 10 minutes later I brought up this lil guy. Was probably barely legal, but I didn't bother measuring before I sent him back to the deep water. The guys in the boat were gone by that time 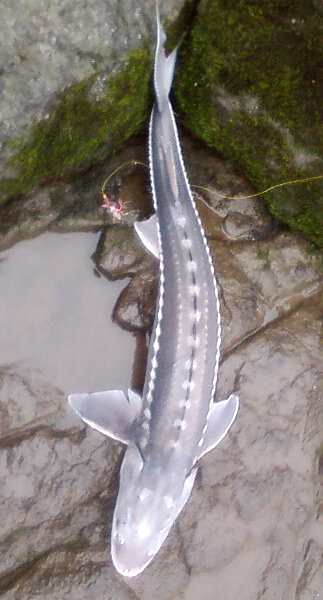