S
Spydeyrch
So I am heading up to Silver Falls this weekend (10/22 - 10/23) to do some camping with the Boy Scouts as one of their leaders. I have been there maybe a total of twice and the last time was probably around 6 years ago. I seem to remember that there is a little stream that goes through the camp grounds and then obviously there is the stream/creek below the falls. The Silver Falls Creek eventually empties into the Pudding River which empties into the Willamette. So it will most likely be Willamette River regs. for that area.

My question is, has anyone ever been fishing around there? And if so, where roughly? Were you successful at getting any hits/landing a fish? I am aiming for trout. I would imagine that there wouldn't be too many fish above the Falls but I am hoping that below the Falls I would have a higher chance of finding a hole with some nice trout in it. It would be purely c&r for all fish.

Any suggestions, personal experience, ideas? It is greatly appreciated. Thank you!!!

troutdude
It's great of you, to be a scout leader.

Here are the regs for Silver Creek:

Silver Creek upstream from Silverton
Reservoir to the confluence of the
North and South Forks of Silver Creek
(Marion Co.)
• Open for trout April 24-Oct. 31, 2 trout per day, 8-inch minimum length.
• Angling restricted to artificial flies and lures, as per Zone Regulations.

I'll defer to others, for specific advice.

Good luck.
S
Spydeyrch
Thanks trout dude for the info. I could have checked the regs but was being lazy. hehehe. :lol:So thank you for doing that. I just assumed that there probably wouldn't be anything there for such a small tributary but I am surprised that there actually is. :shock:

So then I have a question. What about after the confluence of the N. & S. Silver creek forks? I have attached a quick map to show what I am talking about.

Up closer to the camp grounds (the little "A" maker) are several streams and creeks plus a little pond/lake. And also, up past the confluence of the N. & S. Silver creek forks is a small stretch of the S. fork up to the falls and also the N. fork is quite long.

I would assume that they would just be based upon the general regs and not the special regs that apply to that specific stretch from the reservoir to the confluence. Can I make that any more confusing???? hahahaha :lol::lol::lol::shock:

Thanks for your guy's help. 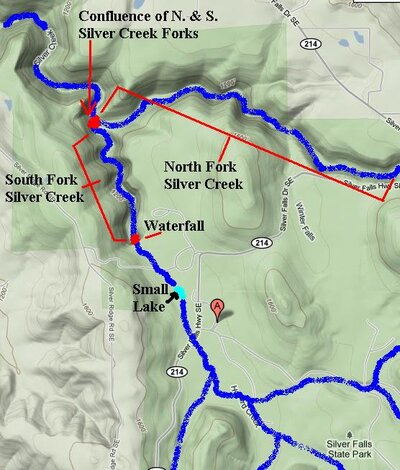 D
Drew9870
Silver Creek is a very humble Creek to fish, small black fur jigs and small flashy lures will catch fish, I haven't been there with waders, so I never got a chance to toss any flies, although I plan on getting somes flies wet around the Silver Falls Park area, that whole stretch looks like awesome fly water.

I do really good with the rainbow trout colored Blue Fox, I wouldn't go extremely small unless you are using low diameter 4lb line and an ultralight setup, usually you will get a few strikes until you hook one. Black jigs are another one of my favorites, the Trout/Steelhead jigs with a few strands of (I think it's the right word) Flashbou in the fur. So I wouldn't doubt any ant patterns or a black hares ear nymph with a gold bead for the fly rod.

I've never fished up there before, but it sounds nice. I would THINK that the Zone Reg's would apply there. But, I'd suggest that you read the regs firsthand and don't just take my word for it. I don't want to get the bill for your ticket! LOL

Glad to have helped some.
S
Spydeyrch
Awesome. Thanks guys for the responses and the suggestions. I will try a little bit of everything. Wish me luck! ray:ray:ray:

I have some hip waders so I will use those too. :dance:

-Spydey
S
Spydeyrch
Well, it has been about 3 weeks since I went fishing. I have had some major work projects to get done and took a week of vacation so I am sorry for the late report.

Got to the camp site late Friday evening, I kept looking at my watch hoping I would be able to get there with even just an hour of fishing time left but no luck.

So I asked around to figure out which boys wanted to go fishing with me and I ended up getting two of them. We woke up early Saturday morning, ate some breakfast and then took off. The waters were really really REALLY low. There is a section of the stream above the falls that is used as a swimming hole and it was maybe like 5 inches deep at the most. Pretty sad.

Well, we hiked about 1.5 miles down to the bottom of the closest falls. I went of the gear, why we might find fish at the base of the falls, and how to cast. I had a 6'6" spinner rod and reel with me with some newly wound 4lbs test line on it. I went over the different lures, flies, year, & bait that I had. It was a little over cast with the sun breaking through every once in a while. It was a nice day. A little chilly but over all a good day.

I showed the boys haw to cast and how to retrieve. Not that I am a pro or anything but I taught them what I could. They tried a little bit and kept asking about how would I know if a fish was on and etc. Eventually I took the rod from them to give them some pointers. On the third cast, fish on!! I was using a little black and yellow dotted 1/16th oz panther-martin. It was a quick little bugger. Once second I was retrieving and then there was a flash of silver and I had a fish on. It was a little 5 inch cut-throat. Beautiful!! Absolutely stunning in color and sparkle. The boys were just amazed that there was actually fish in the stream!! hahahaha lol. The hook was in pretty deep in his mouth. It got two of the three hooks stuck and I couldn't get them out so I just let him swim around for a few moments to regain it's strength and then with a few quick shakes, it spit out the hooks and was gone!!!

So the boys wanted to try again but with no luck. So I took the rod again and cast over to a different section, this time with a 1/16th oz rainbow colored rooster tail. After the second cast, bam .... bam.... bam... little nibbles/strikes ...... BBBAAAAMMMMM!! BIG STRIKE!! The line went zig-zagging through the water for about 5 seconds while I tried to get the boys attention and then nothing. I reeled in and nothing on the end. Oh well.

So I switched to a rainbow/copper colored 1/16th oz panter martin and started casting again. About the 5th cast bbbaaammm, another little 5 incher. Beautiful! This time just one hook through the side of it's mouth. Easy to get out. So I let one of the boys hold it in the water and then let it go. Neither of the boys had ever seen a fish, other than in the supermarket/pet store, let alone held a fish!!! So they thought it was pretty awesome!!

We went down the trail a little bit more to practice casting in different situations. We had a blast. We then hiked back after about 2.5 or 3 hours of practicing and fishing. When we got back, the other leaders and scouts had taken off for a hike. And instead of wanting to catch up, the boys wanted to run back down the trail to the 2.5 mile point and fish at a different set of falls!!! hahaha lol. They had a little bit of fishing fever and I soaked up every second of it. It was great to see another generation feel the thrill of fishing and want more.

Well, just as we got down to the falls, the other scouts and leaders came hiking up, so no more fishing. Oh well.

One of the 11 year olds (it was his 2nd camping trip with the older scouts) wanted to go but couldn't so I invited him and his dad to go fishing with me sometime in the next few weeks. He is excited!!

Oh, also, I was in such a rush to make sure I had my fishing gear in the truck that I forgot my tent. So I threw down my tarp under a pine with some low-lying branches, stuffed my mummy bag in my bivy sack and bivvied it the whole night. It was great ..... with the exception of a few raccoons bothering us, hahahahahaha.

All in all, a great experience for the boys as well as for me!

troutdude
That's a really great report. Good for you, for showing those kids a new hobby!

I'm glad that you all had a good time. I was a boy scout once (too long ago to remember a whole lot...LOL).
O
OnTheFly
That's priceless. If there is only one thing those boys will remember about scouts, it will be the time they had with you catching fish.
S
Spydeyrch
Thanks guys. Yup, we sure had a great time. I am excited to take the other boy, the 11 year old, and his dad up fishing. Neither of them have ever gone before so it should be lots of fun!

P.S. I am probably going to take them up to a stocked lake. There is one close by, Horning's Hideout, or to my friends private lake full of large mouth bass. That should be fun!!! I can't wait to see the boy's face the first time he hooks into a good fighting bass!!!! hahahaha.
Last edited: Nov 15, 2010
M
mahmichael
Spydey,

Thanks for the report, we are planning to go there this weekend and I love to do some fishing there. Do you think it still be good at this time? Which branch you guys went, North or south? And would you please tell me which fall where you fishing?!!

Thanks So much!
You must log in or register to reply here.

Any bass in Silver Creek Reservoir outside of Silverton ?