First Coho by team Upside Down!

M
meluvtrout
As most of you already know, I had a long term skunkage on my back, which I had to deal with by checking into a rehab and going under a painful treatment. If you're a fan of the show "the Deadliest Catch", I was featured in one of last season's episode, where crew members of 27 boats prayed the Lord to return home safe and end my terminal skunkage.
Last weekend was my graduation from the program and couldn't think of a better way to celebrate it other than going to Pacific on a Coho trip with my bud FishFinger(who was also diagnosed as Stink Finger until he ended his 16 months of skunkage last month)...
The nurse at the reception desk was so kind to book the trip for us with Dockside Charters off of Depoe Bay for today (Danke Olga!)*
I needed to spend some alone time with family and needed a change of scenary that reminded me of my skunk. I've arranged a vacation home out in Lincoln City where I could relax and be ready for my ultimate challenge! Facing the mighty old Salmonid!
Around 4am FishFinger came and picked me up from Devil's Lake(by the way Barbie rod girl scored a 15"er out of Devil's! Nothing like daddy, I tell ya!) We had a 20 minute drive to Depoe during which we were both dreaming about an early breakfast! Couple of bacon and eggs, or perhaps some Clam Chowder! Was greeted with a sleeping town of closed stores! Wondered around town trying to decide where to eat some CC on the way back.*
Around 5.30 we were at Dockside Charter's office and were assigned to boat Cha-Son with captain Bill. Around 6.00am were on the boat with 2 gentlemen from LaPine, another RV travelling gentleman from East Coast and Bob (who was a regular client of Bill's and slept in the cabin for 3/4 of the trip)
The tides were at -2. We had to get out of Depoe, and we did!
Soon after we left, about 3 miles off the coast we were fishing. 6 rods in the water, all dressed up with deepdivers, Fordfenders, hoochies, barbless hooks and herrings! Within 20 minutes first rod went off! Fish on! A 10-12lb hatchery goes to Lapine! All pumped started looking at our rods as if they were going to run away. In about an hour, second fish went to Mr RV! A nice 8 lber. Then FF had a hookup and what a fighter it was. I can still hear him yelling, it's still on! A beautiful 5" baby Coho, which had to go back in the drink.*
Into the 3rd hour of the trip I started to feel a little green! Not with envy, but with the attitude of my city tummy against the mighty Pacific. I took a dramamine which is supposed to help, right? Wrong! I started feeling quizy when FF landed another one! A native this time, and so did the RV guy. Having fulfilled his quest of fighting a fish in Pacific, FF said whichever the 2 rod goes down I was going to reel it in.*
Sweet, but Oh man! Speaking of pressure! That's when I decided I had to do something! Excuse me Mr RV, could you move to the side bit? Thanks...
Booooaaaaaarrrgh! Well, you know the story!
Wooh! What a relief! Then the captain yells, last 10 minutes of fishing! Whoever caught any fish bring your licenses in! Oh, no! Come on, comeee oooonnn!
All of a sudden! Bam, bam, bam! FF's rod goes down! I go reach for it, start reeling it in! Oh no he spits the hook! Damn you barbless hooks! My shoulders fell in front of me, with the feeling of losing a great battle when I heard, Err whose rod is this one?*
Zeus, Odysseus whoever was in charge heard my prayers! It was my rod! My rod, my rod I yelled. Left the empty rod and grabbed mine as if hugging a long lost friend! It was coming to the boat, it was, it was.... In the net! And the captain declares, it' a keeper!

Oh yeah! I'm back baby! I'm writing this from Iphone.Pictures to follow...
B
beaverfan
Congrats bro it's a great feeling to get the skunk off your shoulders. That fish is gonna taste mighty good I'm sure!
B
Bohemian
You just made my day!!!

Way to go :clap::clap::clap:
I can't wait to see the pics.
D
dude young
Dam dude! Any day now the skunk will be listed on the ESA list. (Maybe even get a gill net season for them then) It is good to hear that the Gods are still shinning on our little band of miscreants.

Now, tomorrow, go to the river and pour a shot of whiskey in it. The Gods like whiskey. The Gods will like you.
F
FishFinger
Another skunk bites the dust... Finally.

Another skunk bites the dust... Finally.

Yep.. I saw it happen with my own eyes.. today the stink, the bad ju ju, and the endless excuses of coming home empty handed; came to an end.

The OP covered the details quite well.. Except about the 5" fish.. it was 12" but maybe Ali is still wrestling with the metric conversion thing.. I don't know...

Here are some follow up pictures of the event. 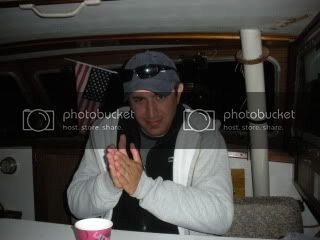 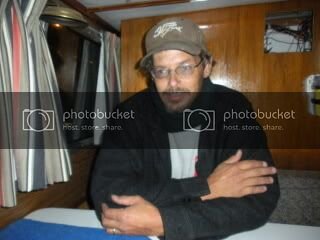 Ahh the anticipation is growing as we are the only two on the boat while the tide is quickly running out. 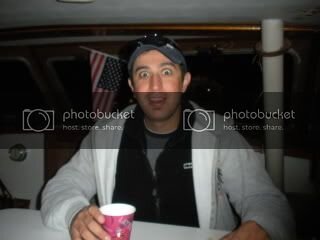 "Wadda you mean I gotta bite the head off a herring...?" 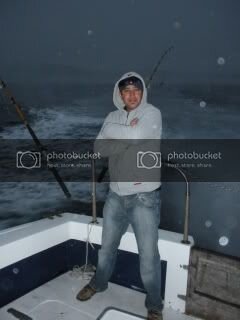 Claiming a spot at the rail. 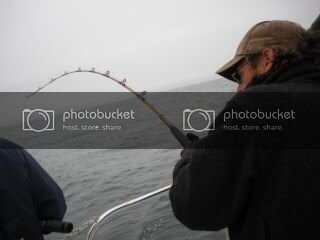 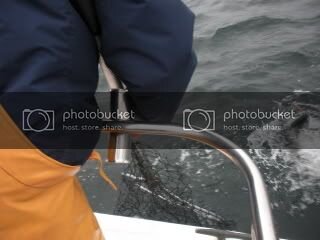 Capt' Bill on the net.. A nice non clipped returned to the sea... 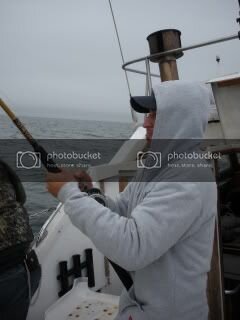 Last 10 mins and it breaks loose... FFs rod gets a take down 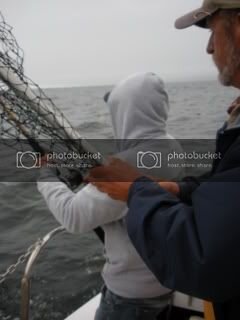 Poised to net the fish, just when it spits the hook 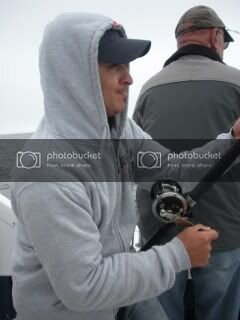 Instantly another take down, on MLTs rod.. And this time it's serous business... 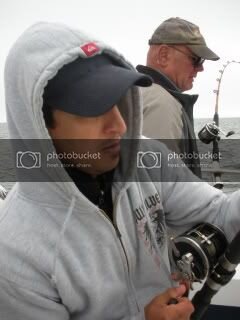 Did I mention this was serous business? 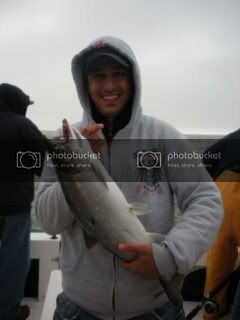 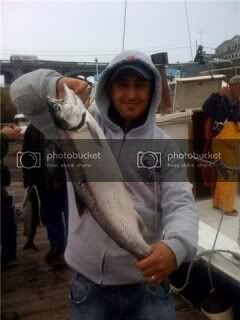 Yes, they do look a bit biger when you hold them towards the camera... 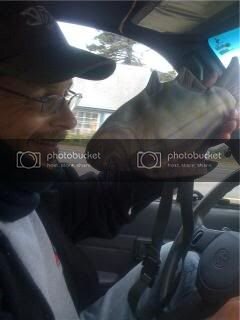 Just like JeannaJigs I never go home without a fish either. It's not on my wrist, it's under my seat...

The one thing that would have capped off the day would have been a hot bowl of clowder.. but "someone" didn't "feel" like eating anything.. lol..

Congrats buddy, your salmon cherry has been offically popped.
Last edited: Aug 20, 2009
K
Kodiak
I called helga and explained you wouldn't be checking back in. She but away the hot water bottle..you are safe for now!..Nice Work!
O
OnTheFly
All that intensive therapy finally paid OFF! Then you waved a good ridance good-bye to the skunk with the upside-down fish. :dance:
Last edited: Aug 20, 2009
M
meluvtrout
What a day it was! And FF that fish was 5" !!! Don't worry, I'll bring you some Clam Chowder from MO's on the way back!
H
here2fish
heheheeeeheheh

everytime I see the funny fish(upside down) pose it cracks me up!:lol:

Irishrover
Great story........they way you wrote it made me feel like I was out there on the boat with you. The best thing about the barbless hooks,......the are easy to pull out of your fingers! I like the dramamine portion of the story. Dramamine that's the stuff that make you feel sleepy before you loose lunch over the side. On a serious note my wife gets sea sick very quick. She went to the doctor and she prescribes a patch for her that she wears behind her ear. That took care of the proplem. Now I notice lots of folks wearing them down at Newport. It sure make the ocean fishing trip a lot more fun for her now that she doesn't have that quizzy feeling. Good job on dumping the skunk!
Last edited: Aug 21, 2009
N
ninja2010

dude young said:
Who's next? Who's next I say? Stand up and be heard!
Click to expand...

mel: good job on the nice feeeesh man. luv the money shot too... :lol:
You must log in or register to reply here.