Finicky Trout and What Is This Pattern?

C
ChezJfrey
I've recently begun fly fishing and I've got a sizeable portion of a river that has a good number of trout that I can observe. If I cast near the edge of a seam, I can often see the fish as they approach through the calmer water, so I've done some experimenting.

Going through the fly selection I have on hand, I've noticed that the trout will often come out of hiding and check out nearly every fly, but after investigating for a bit, will retreat from whence they came. I'll try the same fly again, but give a twitch, or sometimes strip the fly out of the seam, into the calmer water and let it again drift, then I switch the flies and repeat, but nothing goes for many of the patterns...those fish or more finicky than my kids, LOL!

Sometimes, what worked one day, will not work another. One day, an Olive Woolly Bugger was like crack on sale...either dead drifted or on short strip retrieves I had strikes nearly every cast, the next time out...nothing to do with it. Well, except for the one time a black one worked...on a pike minnow! Another day, a Copper John was good for a couple, but it had to be dead drifted.

I watched the fish below check out the CJ for a good 5 seconds, before a very subtle take: 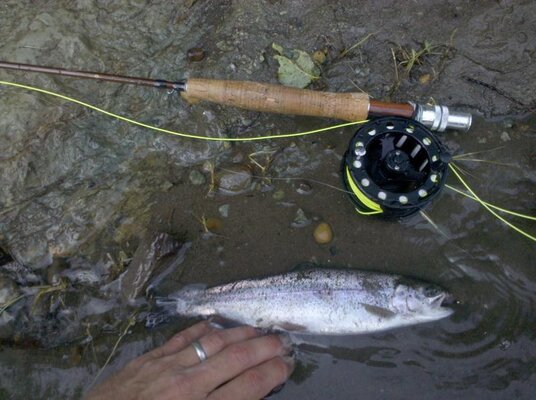 The other rainbow that took it was a small little thing that either just happened to notice at the last minute, or kept an eye on it for a good long while before shooting out of nowhere and grabbing it and setting the hook on itself just as I was preparing to recast. I didn't get a photo of that particular one as he was apparently camera shy and escaped while I was getting the camera ready

So, obviously the fish are very particular about both pattern and type of presentation, but it can vary from time to time...even among presentation style for the same fly! Kind reminds me of a marriage

The fly below is a black version of another couple that I had; the other was identical but for a yellow body. The yellow worked one day but only as the fly started to swing out of the seam...boom! The fish would hit at that moment. Unfortunately, I ended up losing a couple of these flies and will likely replace them.

Looking around on the 'net, I haven't been able to figure out what the pattern is and was wondering if someone could tell me?

All in all, this has been a fun and educational experience so far.
B
bigsteel
the fly looks like wooley worm,,,what size tippet are u using???
C
ChezJfrey
4x

With a lower, clear flow, do I need to downsize the fly, along with a lighter tippet maybe? I'm catching fish, missing a few hits, but perhaps I'd get more with something smaller.
B
bigsteel
i would definitely go with smaller tippet like 5x maybe even 7x,,,,i would try downsizing your fly,,,,,,,,tie on a size 14 dry fly with a size 18 dry fly trailered off the back of that,,then the fish will tell you what it wants!!!!!!!!!!!!!!!!!!!!!!!
S
skunk
One good method that I use, and it really works best on close fishing where you can really observe the line end, is to use a small beadhead squirel tail nymph. Stealth is the name, approach from downstream. I dead drift it, let the nymph do the sinking and watch the end of my fly line. If it does anything, set the hook. After awhile (many many casts) you'll zone in on it and have a rough idea of where the nymph should be. You'll almost sense the take, be it a flash as the fish moves, or a slight twitch of the line. I have set the hook many times on a fish that I really never observed just 'felt' it should be there after observing it move to the fly earlier. I do best with this after I've located fish, then drift the nymph by them. My other fav is a beadhead hares ear. Both have my own 'flavor' tied in them, so not truely the traditional ties.
T
the_intimidator03
i agree with the wooly worm but i think its more of a dry pattern with the way the hackles point to the eye of the hook. if ya flip the hackle around it becomes more of a wet fly.

griffiths gnat - Google Search
Last edited: Jul 12, 2011
T
Trout
The fly is definitely a Griffith Gnat variation -- which from my point of view is generic fly shape meant to represent any number of flying bugs. Its a great searching pattern in flat to moderate riffles. As many have said smaller is usually better say 16 or 18. On the Deschutes I've heard the rule that you should be fishing in one of three places:
- on the surface - dry fly - or a crippled
- within 6 inches of the surface - an emerger pattern
- within 6 inches of the bottom - a nymph

I would think those rules are somewhat universal. Another generic pattern thats worked for me is the Prince nymph 14 - 18. Non-bead head for floating just below the surface. Or a bead head to bounce along the bottom.

Good Luck
M
metalfisher76
I think it`s fly! And it`s seems to be bleeding...
H
halibuthitman
that is a traditional wooly worm before all the tweeks folks have given it over the years, my 1976 copy of flies of the west shows the photo bigsteel posted, the one in the picture in the original posting exactly resembles the wooly that comes in a blue danielson bubble pack with several blue pink white and yellow versions of soft hackles. The palmered ( reversed hackles ) was a typical way of tying all hackle dry or wet back in the 60's and 70's, it is still believed to be more vibrant and attractive by some tiers.. the fly in your photo appears to be a version of the wooly from a sweat shop in India.
C
ChezJfrey

halibuthitman said:
the fly in your photo appears to be a version of the wooly from a sweat shop in India.
Click to expand...


LOL! Probably, as it was one that was indeed purchased in a pack and given to me...just last night I found that the black version works similarly to the yellow in that fish seemed to dig it, but the hackle came unwound after two fish. Nothing but quality there!

The good news is that I've been picking up replacements for the ones lost/damaged at River City, so hopefully they should be a bit better quality moving forward
You must log in or register to reply here.

Saturday at 8:02 PM
brokencoastal
B
E
Baja mangrove fishing with a fly rod