The boy and I headed out to the Deschutes last week to try our luck at the salmonfly hatch. I had taken him several times last summer (after the '20 salmonfly hatch had receded), and we were resoundingly skunked by the big river, so we had some scores to settle. I needed to convince him of what all the hype was about. Normally I avoid crowds at all costs while fishing, so we chose midweek at the tail end of the hatch.

The day started slow; the weather was a bit cool and very blustery. A few risers and attempts during the mid-afternoon while the sun was on the water, but once the sun dropped below the canyon walls .... The boy successfully landed several nice trout, and is now a true believer!

I was equally lucky with short casts upstream towards the grass banks and trees. Lots of fight in the mostly 14", but had one large fish on that seemed ginormous. It hit just down from an alder, then quickly headed for the main current. The strike was so solid and sudden that I was caught surprised and slipped my footing in the stream. I was in the process of moving upstream a few steps, and had just cast upstream to get my line clear for re positioning. I fell into the river, and had a little bit of water to splash into my wader's bib. Luckily I was able to use my walking stick to right myself, and to continue the fight I was able to bring it back in to shore near me, but then it just went straight down and settled on the bottom. I was able to move it a bit , but no where close to my net. Lots of strong head shakes and short moves became a test of wills. It felt reminiscent of a chinook the way it deep sounded and refused my efforts to land it. It felt really big, and did not leap, although I saw it rise almost to the surface and roll a couple times. Eventually I lost the fight as it spit the hook, and was gone. But what an adrenaline rush! Could have been the catch of the day!

As it was, I did land a 17" as my last catch, but was not able to get a picture due to lighting conditions; we had fished right up to the last light!

The boy is now stoked, and wants to go back for more next week in spite of the 2.5h trip one way. We are hoping the hot weather may invigorate the hatch. We will see, but a perfect opportunity to spend more father son time in any case. 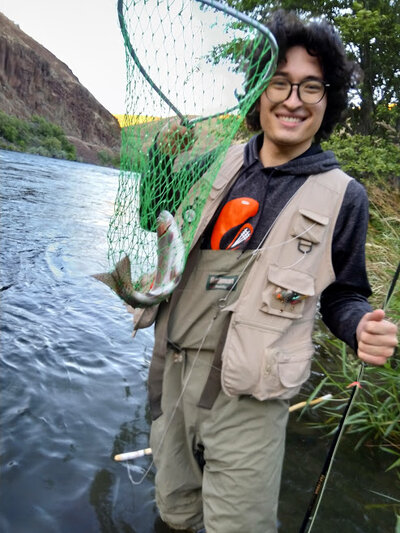 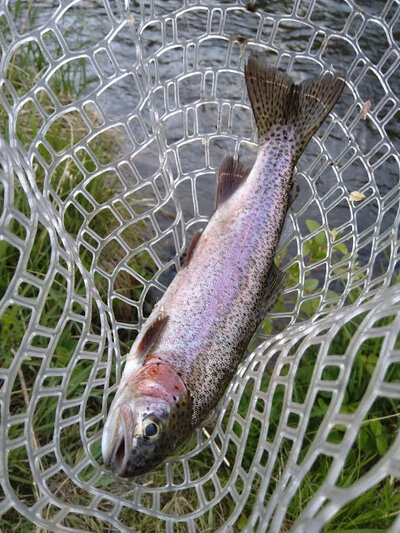 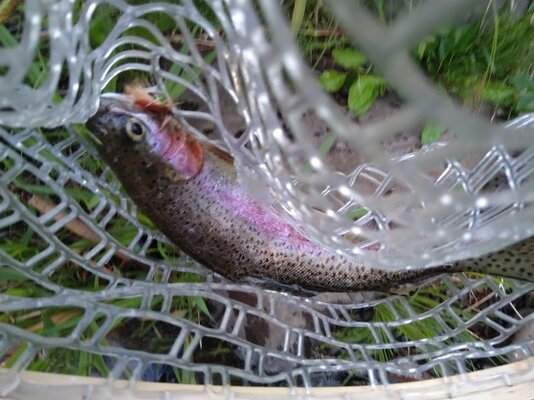 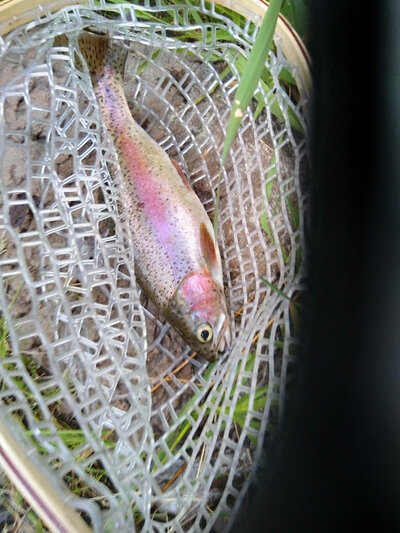 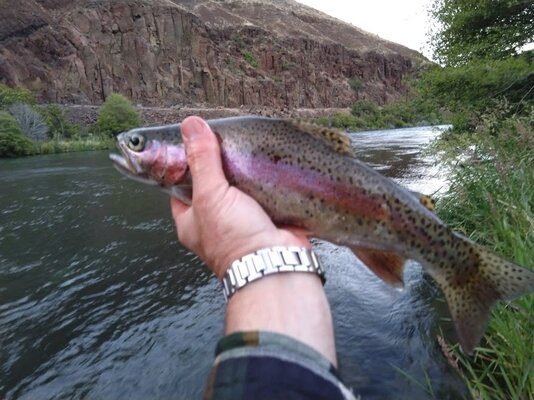 Awesome! Always wanted to check out the salmon fly hatch

Its a hoot if all the stars align and the fish are biting with fewer people crowding the banks ...

Glad you two had a great trip. Thanks for the report.

Will try again this week. Hopefully the trout are still eager.

What a difference a week makes!

I was hoping the warm weather might have invigorated the stoneflies, but alas not. I was still able to hook and land 5 redsides (and 1 pikeminnow), but unfortunately the boy was not so lucky.

I did see the occasional golden stone flittering about and on the water, but the trout were just not eagerly rising to the live or tied flies. I caught all my fish on a #12 stimulator of yellow or orange body.

Regardless, a trip to the Deschutes is always better than the alternatives!