Coho on the fly--Alaska style

J
john montana
Disclaimer...I just copied my blog post in response to the recent mention of wanting more fishing threads. Sorry for the copy and paste job, and I didn't have the energy to put all the pictures on photo bucket, so I just put a few here. There are more on my blog if you want more fish pics!

I wrote this after a day of coho fishing. I was sitting by myself in the main lodge, having just caught another bundle of grayling. I was warm, had a cup of tea and a cookie in front of me and I was very, very happy. Thanks again for such a memorable trip dad.

Sick, sick fishing. My shoulders ache from both throwing a heavily weighted pink marabou monstrosity, and from fighting coho in the 10-16 lb range. My dad is already in bed, exhausted from the same. At one point Scott looked over at us and said "is that the fifth or sixth double you guys have had?". We hadn't left the first run yet. Leaping salmon are burned in my mind, similar to the line burn on my fingers. One of my knuckles is bleeding from a solid crack by a spinning reel and the image of fly line ripping off the surface as a salmon races upriver is locked in my mind forever.

But despite numbers of huge coho that defy reason or attempts to pin down, one image series will never be forgotten. Popping dry fly coho.

Late in the day, sated and feeling good I tied on Scott's goofy looking foam and marabou popper. I walked down the middle of a run, quartering the cast downstream and letting the fly swing and wake...popping to create extra disturbance every second or so. After twenty or thirty casts I started laughing out loud at the absurdity of it all...popping what was essentially a bass bug over the tops of dozens of coho that were readily eating a lead eyed streamer. What was I doing? As nice as it was to be throwing something that weighed less than a small person, I had just walked halfway down a run without a hit...ten minutes without hooking a fish felt like an eternity! Fortunately, I kept casting while laughing and on about cast 40 or so it happened. A big boil appeared about 8 ft behind the fly, and then a wake started following. I started saying "oh, oh, oh" over and over again as the bulge of water kept coming, but I kept popping and swinging that fly. After what seemed like a mile of river (and likely took 5 seconds or so which really is a long time) the fish reached the fly and a big black gummed mouth opened up and simply engulfed that popping, goofy ass bass fly. I waited until I felt the weight of the fish and then drove the hook home with a vengeance and the fish exploded in typical coho style.

Just another day in Alaska. 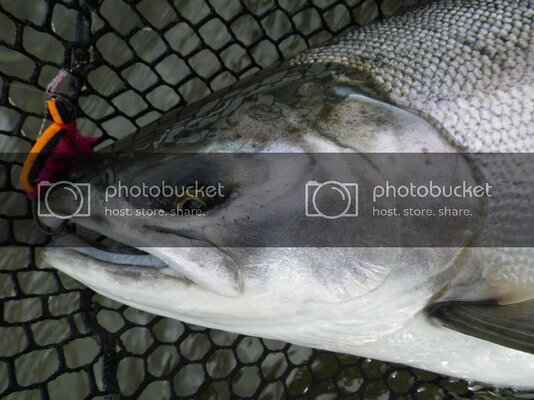 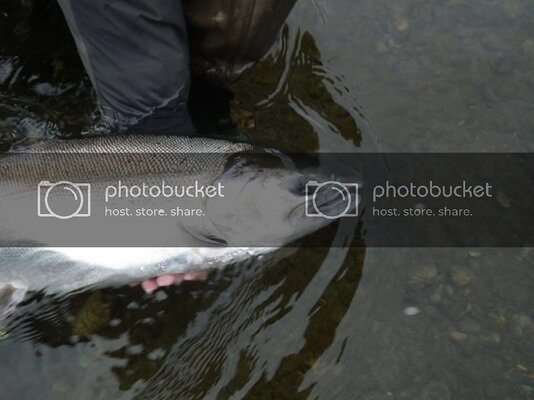 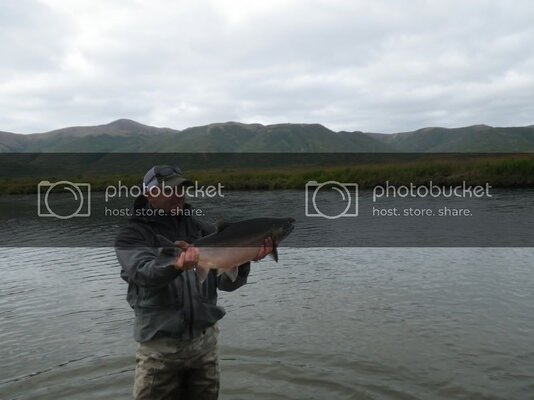 N
nwkiller
that second picture is so chrome...the third, not so much, great post


Randy
J
john montana
Thanks guys...that coho n a surface fly was one of the coolest things I have ever seen when fishing. What a moment.

NWkiller...we didn't keep any fish, so I actually preferred the ones with some color...they look cooler!
T
todd_brooks
Dude that's cool! Glad you took the time to share. I hope I live long enough to fish Alaska.
W
waco
Wow you are so lucky Jhon!!! Thanks for sharing with us your experience on heaven!!! Alaska is on my list! Even I know I might never be lucky enought to go there someday!!!
H
halibuthitman
some day I too shall fish alaskan chrome! great pictures and post- Brad

GungasUncle
Didn't you just get back from doing a lot of alaska chrome fishing Brad?
H
halibuthitman

GungasUncle said:
Didn't you just get back from doing a lot of alaska chrome fishing Brad?
Click to expand...

well, yeah, but I can't wait to get back... I was just tossin props.. and I dig his blog as well.. not lets keep it on track folks!
E
eggs
Brad take me with you! John just made me cut my sons' college fund in order to fund an alaska trip!
C
ChezJfrey

eggs said:
Brad take me with you! John just made me cut my sons' college fund in order to fund an alaska trip!
Click to expand...


No worries...spend it all. It's good incentive for them when you tell them they need to step it up in school 'cause they're gonna need a scholarship. That's my plan. LOL
You must log in or register to reply here.